The Natives are Restless - Tribesmen for Clotted Lard II 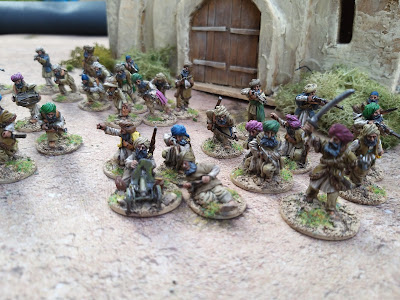 I've been chugging away with the paint brush trying to get through a horde of Tribesman for my Chain of Command game at Clotted Lard II in September. I've already completed some Seaforth Highlanders and some Sikhs. 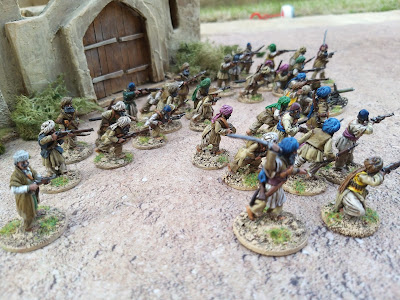 I've finished 35 tribesmen so far. These guys will be Pathan tribesmen who routinely crossed the border between Afghanistan and British India as they weren't particularly interested in nominally lines on a map. They kept the British administration in the North West Frontier busy with their shenanigans. 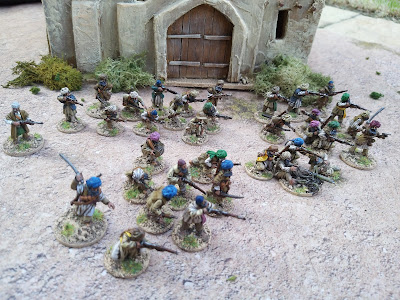 So far I've got 3 warbands of 10, a Maxim machine gun with 4 crew and Big man to boss them about. 4 the final game I'm looking to have this and a bit more for each player (so at least double this many figures). Two of the warbands (or Lashkars) contain tribesmen with rather odd weapons. One Lashkar has a model with Lewis Gun and a young warrior carrying the ammo for him. Another has a pair of tribesmen attempting to fire an elephant gun. I was unsure if I wanted to have these weapons as separate teams or as part of the warbands but I feel like giving the Tribesmen the flexibility of specialist weapons teams would make them a little too like a professional army rather than a mob of screaming mad men. 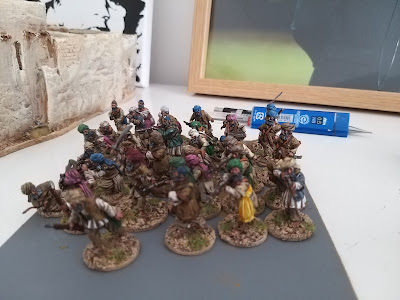 It doesn't look like a lot of figures when they are all crowded onto a piece of board but I can assure you that it felt like a lot when I was painting them! 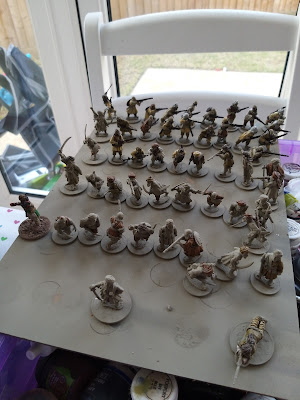 I've got this lot primed and I've started to block in colours (I've even tried a bit of the new GW contrast paints although I'm very far from being a convert) so I'm getting on with them. The figs that are finished are all from Empress Miniatures but the ones above combine more of these alongside Perry and Foundry figures to add a bit more variety in the forces. I've also got a mounted Warband to paint as well. On top of all that I've got the terrain to finish off during the summer. Still loads to do. 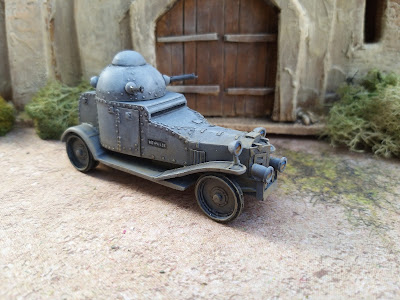 In addition to the tribesmen I also painted up one of my Crossley Armoured cars. This is going to support the Imperial troops in the game and I'm actually going to have two of them, one for each player on the Imperial side. 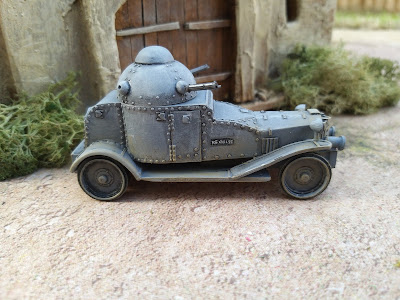 This one is called Repulse which is more likely a name for a ship but as I liked the name I stuck with it. I think the 2nd one will be called Renown. Any other suggestions will be received with the requisite amount of scepticism.
North West Frontier