November 17, 2019
Barry over at League of Augsburg did an interesting post about all the battlefields he past on the way to a wedding in the Highlands and it spurred me on to do a similar post about all the battlefields that I passed on the way from my Mum and Dad's house to Edinburgh while I was up there at half term. Apologies for nicking your idea Barry but I was thinking about doing it anyway. Honestly! 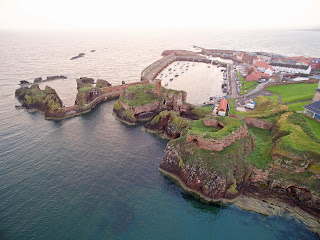 Travelling up the A1 through East-Lothian the first big town you come to is Dunbar. There has been a castle on the Harbour here for hundreds of years although all that remains is some very unsafe ruins. The first battle of Dunbar was part of the First Scottish War of Independence and took place when the Scottish king was John Balliol. Edward the first of England had invaded Scotland to punish Balliol for refusing to support England against the French. Edward sent a force from Berwick to Dunbar in order to take the castle. Balliol sent a force from Haddington to defend it. A brief and fairly bloodless all cavalry battle led to an embarrasing Scottish defeat which eventually led to the conquest of most of Scotland, Balliol abidicating and Edward taking the Stone of Scone south with him. 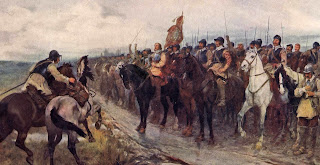 The second battle of Dunbar took place during the poorly named English Civil War (more accurately the War of the Three Kingdoms). The Scots were now supporters of Charles II and were focussed on ensuring that Presbyterianism should be instituted across the whole country. Cromwell and the English Parliament weren't going to put up with that so marched north to deal with the Scots. The New Model Army met a poorly trained and newly recruited Scots army at Dunbar. Despite having a strong defensive position on Doon Hill, the Scots were defeated when Cromwell redeployed his troops at night and launched a surprise attack first thing in the morning. The Scots were routed and driven from the field in disorder. 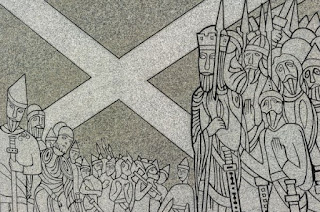 Carrying on up the A1, the next town you arrive at is Haddington. On the right of the A1 is Athelstaneford which is supposedly the sight of a battle in AD832. The King of the Picts 'Aengus MacFergus', with the support of the Scots of Dalriada, fought and won a battle against the Northumbrians led by King Athelstane. The legend goes that MacFergus dreamt of St Andrew carrying a saltire and that, during that battle, a white cross of clouds appeared against the blue sky. This was adopted as the flag of Scotland and obvious continues to be to this day.


On the other side of the A1 is the market town of Haddington which was subject to a siege from July 1548 to September 1549. The interesting thing about this siege is that it was actually an English Garrison being besieged by Scots force. This all took place during a war known as 'The Rough Wooing' which was Henry VIII's attempt at forcing the Scots to marry the Young Mary, Queen of Scots, to his son Edward. After the battle of Pinkie, the Scots had taken Haddington but had then been turfed out by the English. The Scots army actually contained French troops and mercenaries from Italy and Germany so shows the international nature of warfare at the time. The English had a gun emplacement of the tower of the church and this suffered from a lot of the return fire from the Scottish side. The English eventually abandoned the town due to lack of supplies, dwindling numbers and disease. 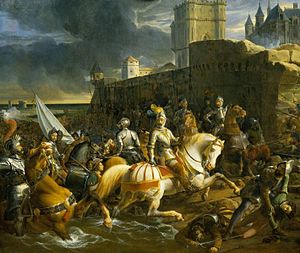 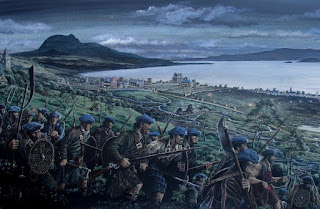 Fast forward a couple of hundred years and the political situation in Scotland has changed dramatically. The descendants of Mary Queen of Scots have been forced from the throne and Scotland is now part of the United Kingdom of Great Britain. However, not everyone is happy about that situation. 1745 saw the final Jacobite uprising which would eventually end in the battle of Culloden. Before that sorry end however, the Jacobites had outmanoeuvred General Cope's Government army and had come down from the Highlands and marched into Edinburgh nearly unopposed. General Cope, in the mean time, had embarked his troops onto ships and brought them to Dunbar where he hoped to chase the Jacobites back up north. Both Armies marched towards each other across East Lothian and faced each other in the fields outside Prestonpans. After some manoeuvring that forced Cope to change his lines several times, a vicious early morning Highland charge swept the government army away with half an hour and gave the Jacobites a massive boost in confidence and support. 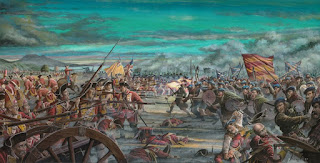 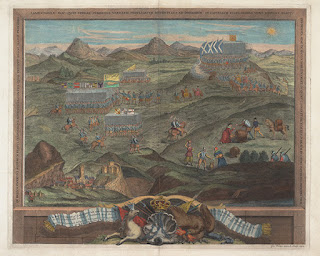 Not far from Preston Pans, on the other side of the A1 stands Carberry Hill which was the site of something of a non-battle. Mary, Queen of Scots (aye, her again) had married her 3rd husband, James Hepburn, Earl of Bothwell, shortly after her 2nd husband (and father of James I/VI), Lord Darnley was blown up at the Kirk o' Field. Many of the Scots Nobles believed Bothwell to have been involved in the Murder so therefore saw the subsequent 'marriage' as highly suspect. Mary and Bothwell left Edinburgh and the opposing Lords followed. Both sides met at Carberry Hill. Bothwell offered to duel any man to end the stand off but turned down several offers due to them being of insufficient standing (only being Barons or Lords). Several canon shots were fired and cavalry skirmished but the stand off continued for the whole day. The queens supporters started to trickle away and eventually she agreed to surrender to the confederate Lords while Bothwell withdrew to Dunbar and after a seaborne chase and battles involving ships round the northern isles, he ended up in Norway. He died a prsioner in Denmark, chained to pillar, 10 years later. 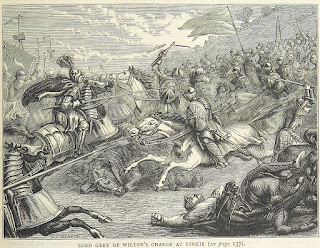 Back to the Rough Wooing again, Henry VIII's attempt at a dynastic marriage for his son. Henry was in fact dead by the time the Duke of Somerset, Edward Seymour, invaded Scotland in 1547. At it's heart, the English army was little different to the one that had fought at Flodden 30 years earlier, county levies armed with Bill and bow. However this army was supplemented by a large contingent of German arquebusiers, Spanish and Italian light cavalry and a large artillery train.
The Scots managed to put a large army in the field an advanced from Edinburgh to meet the English just outside Mussleburgh. The Scots army was made of large Schiltrons of spearmen with highlanders acting as archers on their flanks. The Scots moved to engage the English in order to overcome the disadvantage they had in artillery. As they advanced they were shot at by English warships in the Firth of Forth which caused the left division to move across towards the others eventually causing them to merge into one body. The English charged with their cavalry in order to pin them into place and the English Archers, German arqubusiers and cannons hammered at the Scots until they eventually broke and were pursued all the way back to Edinburgh.

So there you go, in 20 miles or so between Dunbar and Mussleburgh there are the sites of 7 battles within spitting distance of the A1. A busy old piece of real estate!