Not so Eternal Champions. 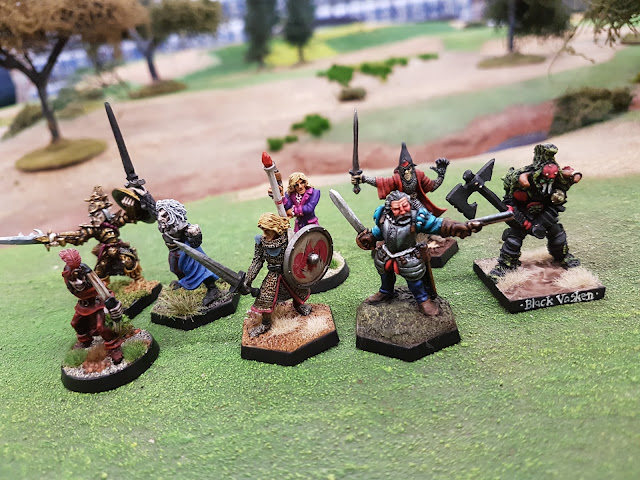 The mysterious powers of Law and Chaos stretched their tendrils through the planes of existence and summoned 8 of the many faces of the Eternal Champion to attend to a matter of the gravest importance. 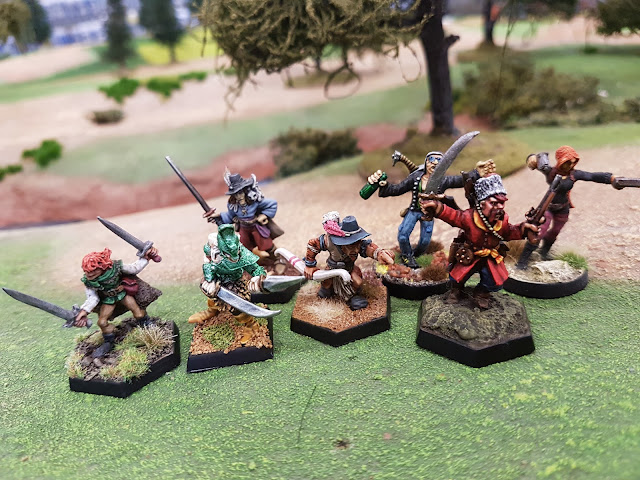 Along with them came 8 of the lives of the eternal companion, ready to aid the champions in their tasks.

A sorcerer of immense power was trying to bring a god from the darkest plane into the world in which the Champions found themselves. If the Alien presence broke through into this plane it would rupture reality and destroy all the realms of existence.
The champions and their companions forged forward, crossing the river and keeping a wary eye for enemies. 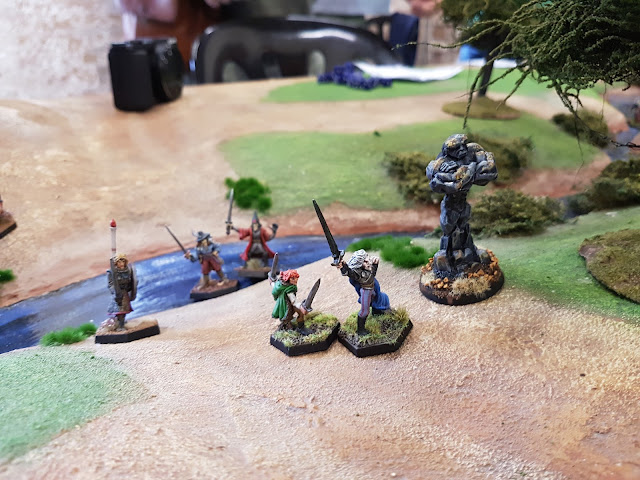 These were only too soon in appearing. Armoured man things in creaking ancient plate stormed across the plain supported by semi-naked barbarians whooping and screaming in a guttural, foreign tongue. 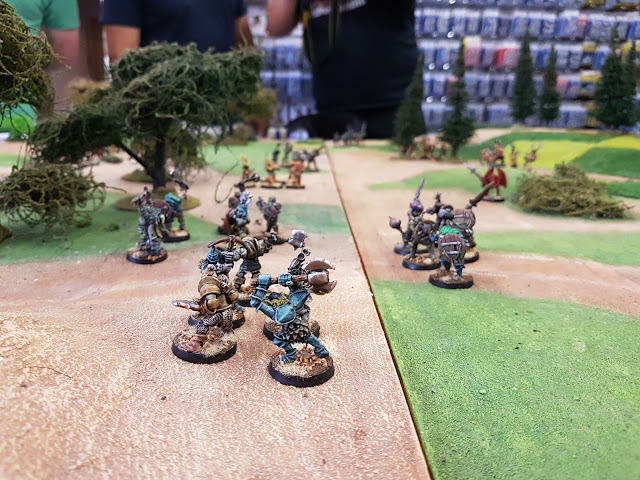 Combat was fierce and bloody. Magical swords rang out and curses were spat. Elric summoned an earth elemental to aid them in their combat. 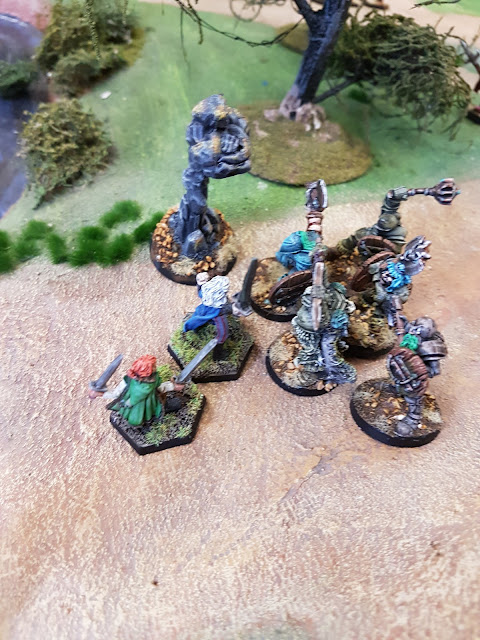 As did Rackhir's sozzled aide. 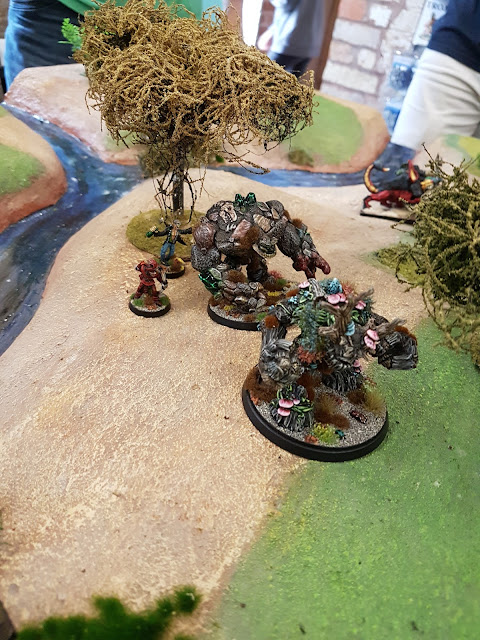 All along the river bank the sounds of combat and strange weapons sounded out as both Champions and armoured fiends fell in pools of stinking blood. 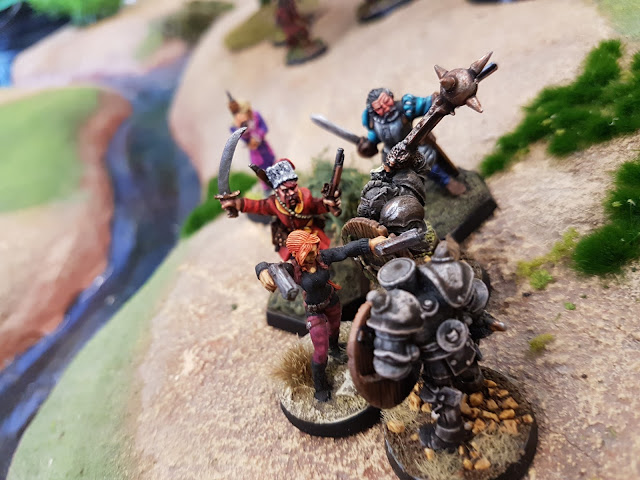 But still more of the Barbarians came, seeking combat and a glorious death. 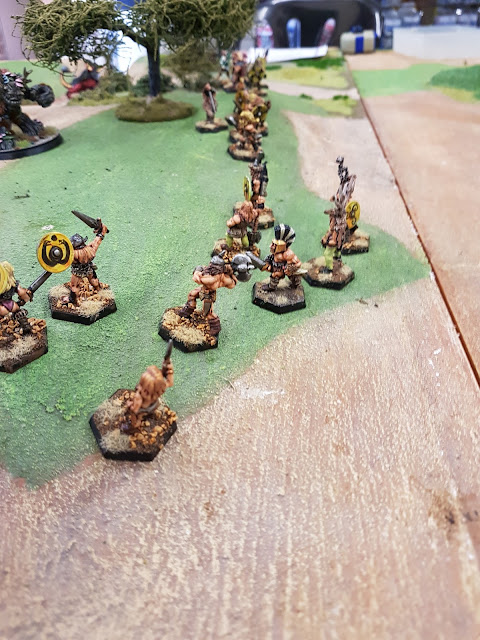 Their shaman summoned a water elemental to do his bidding as soon as he was in sight of the waters edge. 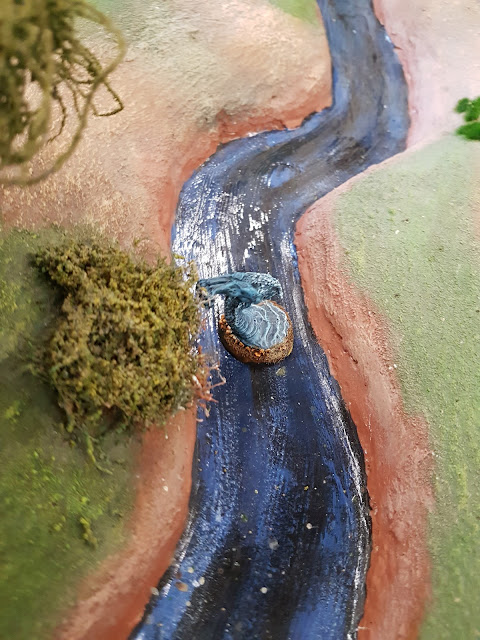 Elric struggled on, Stormbinger finally giving him the strength he needed to down his foes. 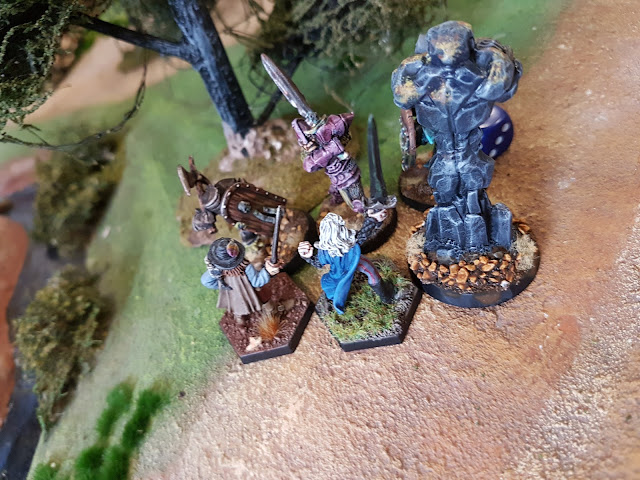 At the other and of the field, Vasken and Noterekose were making better headway against the for as the Blacksword of Noterekose split the Barbarians asunder. 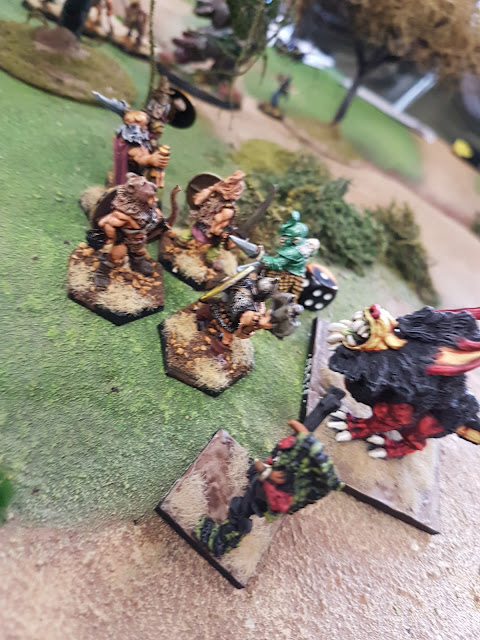 In between, Jerry Cornelius, Rackhir and Von Bek were finding the going much harder as the attempted to keep the foe at a distance so they could make best use of their ranged weapons. 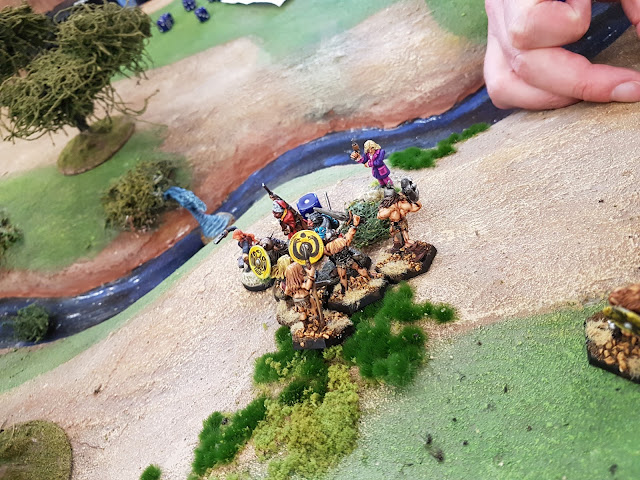 Even the Stone Elementals ended up being of less use than the summoners had hoped although one used his being to remove the Water Sprite from the world. 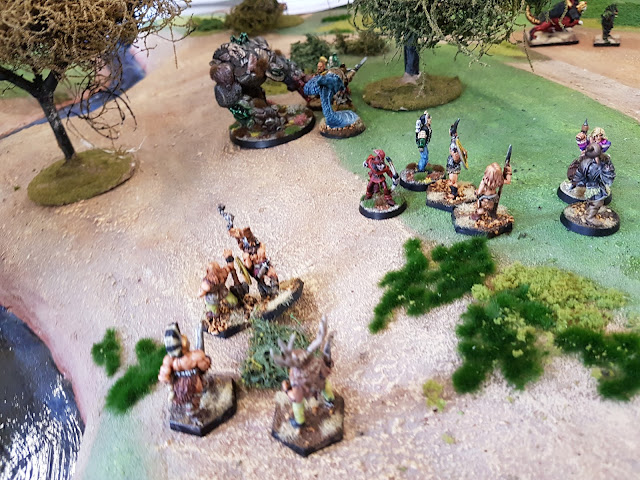 Noterekose noted the struggle and headed over to aid the beleaguered champions. 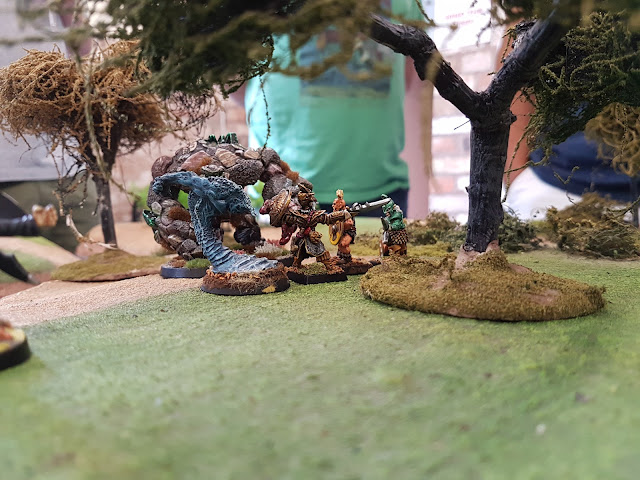 With room to manoeuvre and his Stone Elemental gone, Elric summoned a Elemental of the Air to fly him to the rocky outcrop where the sorcerer was performing the rites that was producing a sickening, pulsing green glow in the sky. 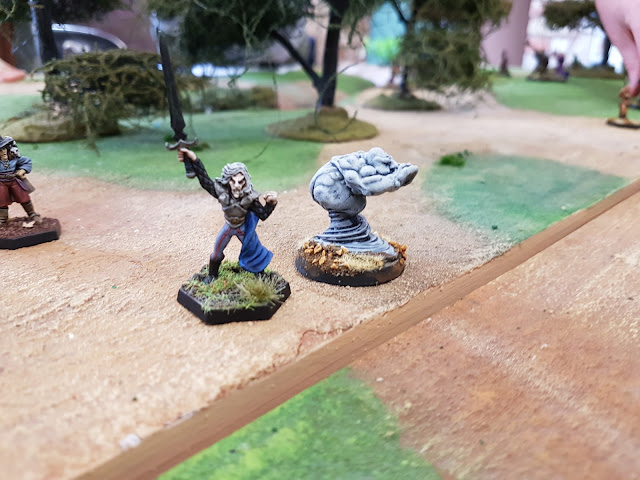 Appearing in triumph Elric was shocked to find an Evil Champion guarding the sorcery. With swift strokes from his magical blade, Elric was set tumbling, broken, down the rocky cliffs. 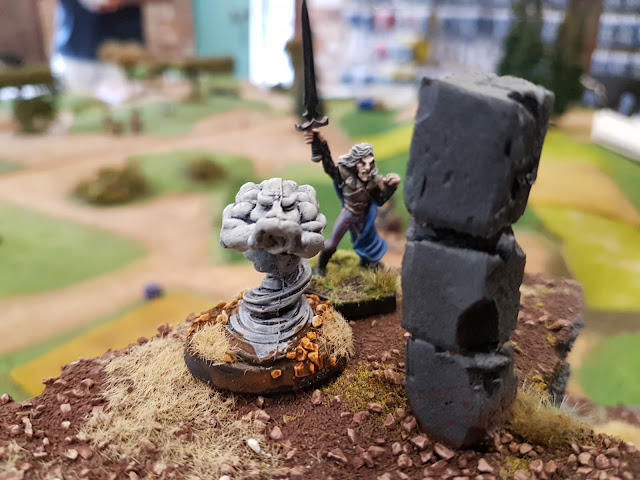 Next to try his arms against the fell champion was Hawkmoon who had used more traditional methods to make his way to the rock bastion but his skills were just as poor as Elric's and he too was run through with the Evil glowing blade. 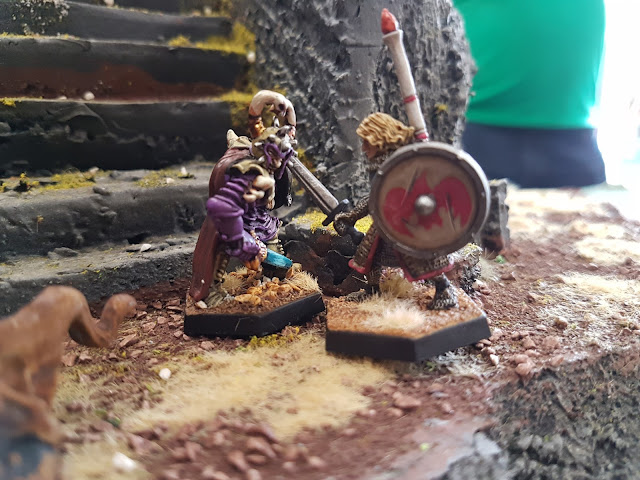 Black Vasken battled his way to the hill but was bested by some of the foul warriors. But he had his revenge in death as his body released all it power in an explosion that destroyed all around it. 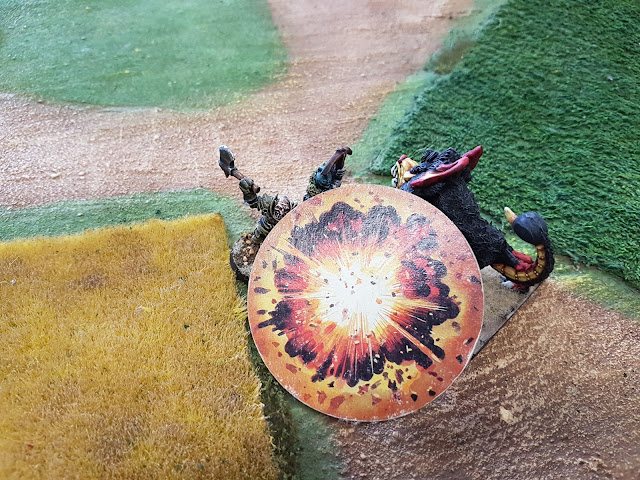 Rackhir Struggled against more of the foes in order to give his compatriots time to complete their task but the god was gaining power and sending balls of fire flying out over the battlefield. 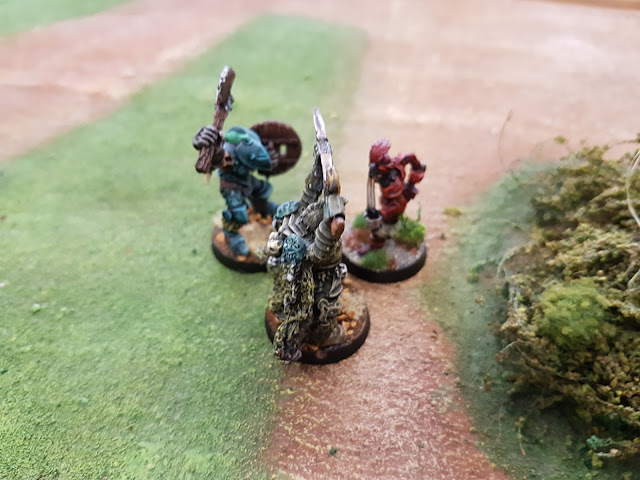 Finally, Noterekose climbed the steps of the rocky fortress and first to fall on his black blade was the evil champion. 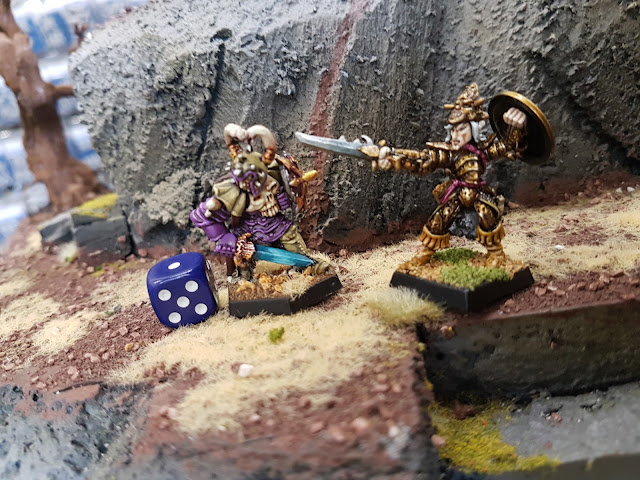 He then battled a fire Elemental summoned by the Evil Sorcerer from the embers of a flying bad of fire. 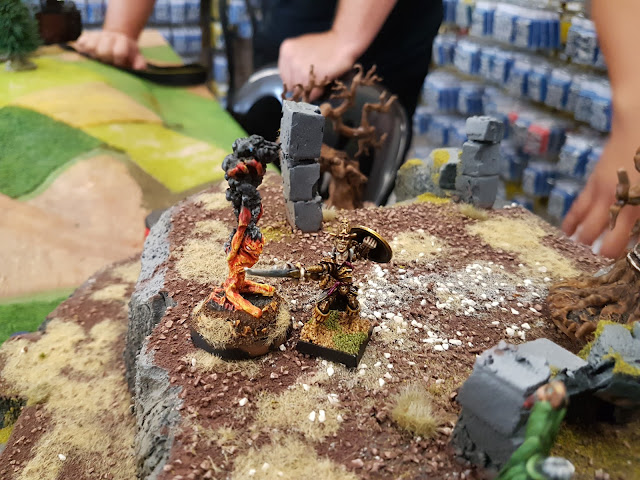 He then cut down the evil magic user himself, removing his perfidious head from his shoulders 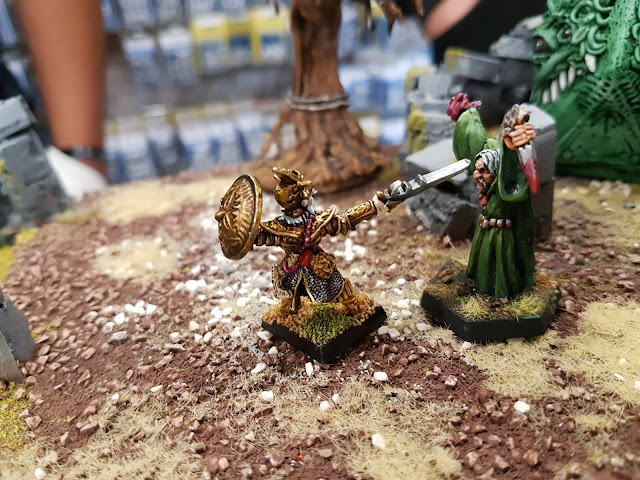 And finally he plunged his dark, brooding blade into the eye of the embryonic god. With a scream that was felt in the bones of every being in the cosmos the gibbering godling was sucked unto itself in a sickening green light. 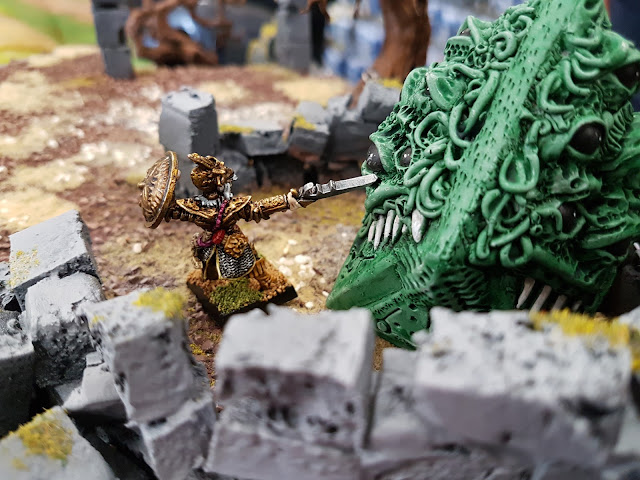 The universe, in all it's many facets, was saved but a the cost of many of the lives of the champion. The gods of Law and the Gods of Chaos breathed in relief as the balance was restored. There would be more tasks for the Eternal Champion yet.....