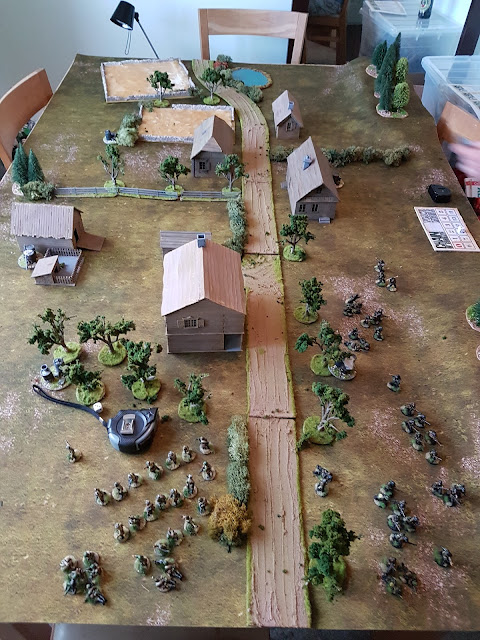 Antipixi and I finally managed to get a game of Chain of Command in before I make the big move further south. In fact we got two games in.

But first, a quick word about the rules. If you aren't familiar with them, TooFatLardies produce a large range of wargames rules that are focussed on encouraging players to use the tactics of the of the period rather than just using figures that imply it. Their rules are a little less robust than something like Bolt Action but give a far more realistic experience. Now obviously the first thing that springs to mind is overly fussy historical rules that require a degree to unravel and are aimed at reenacting battles rather than giving a good game. This is not the Lardies approach. They take their history seriously but not their games. The whole idea is give a feel for the'fog of war' while giving an exciting and fun game. This is exactly what Chain of command gives. Your forces in CoC are based around historically accurate platoons (which are available in teh main rulebook with many available for free on their website and in many of the small campaign books they pubslish (called pint sized campaigns cos that's how much they cost!). On top of this your platoon is supported by various assets based on the the need for the scenario and picked form a list published with the platoon. Easy. 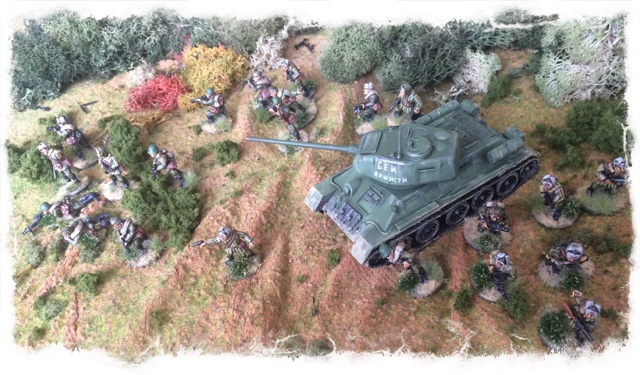 I've got two platoons painted. The above is a Soviet Tank Rider platoon. 3 small squads of smg armed troops with an LMG in each squad. Not a lot of flexibility but they hit very hard at close range. 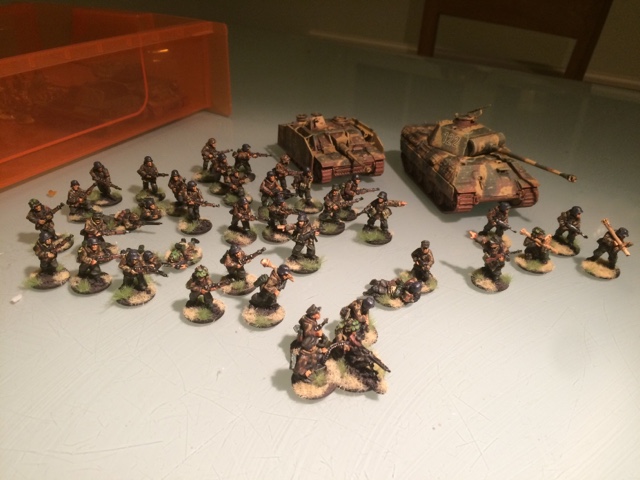 The other is a late war German Platoon. 3 Squads that split down into a rifle team and an LMG team led by an officer with an attached PanzerSchreck team. Much more felxible and numerous.

We decided not to use tanks in our first games so that we could get to grip with the rules. We had our basic platoons plus I had an HMG and Antipixi had a sniper.
The first part of the called the patrol phase and is a mini game in itself which involves moving patrol marker until they come with in range of the enemies markers this essentially sets the 'front line' for the game. From this front line, both players project back towards their own table edge and can place 3 'Jump off points'. These are the places that your troops deploy from (rather than the edge of the table in other games). 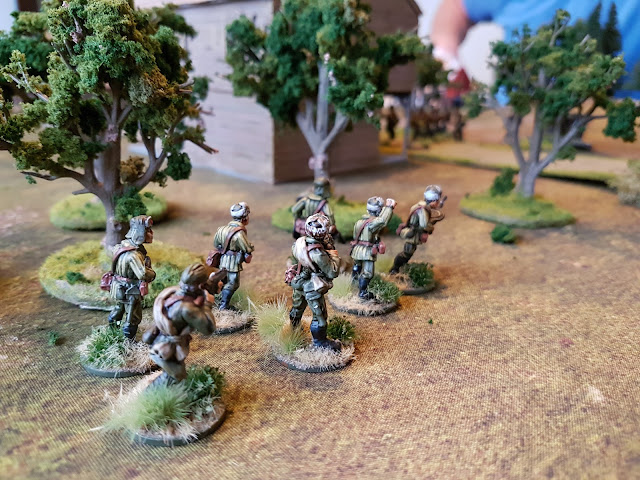 The first game involved me trying to get round Antipixi's flank. I deployed the HMG in the pig pen in order to try to dominate the middle of the village. And deployed my squads out to the right in order to sweep round the large farm house and push the Germans back into the trees. 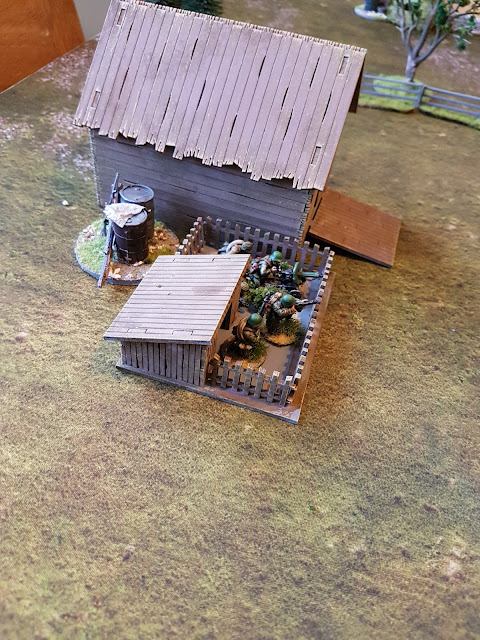 This worked well while I was getting the right dice to be able to keep my squads going  and I managed to do some serious damage to one of the German squads who were caught out in the open. 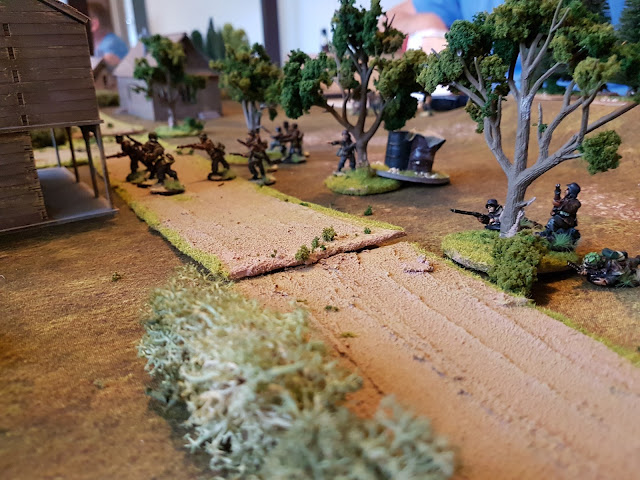 As my squads moved up more and more Germans deployed in order to block the Soviet movement and the combined fire of the MG34's started to tell as my squads took casualties and shock. A run of poor rolls on the command dice also meant that my advance stalled and the Soviet officers just couldn't get their men moving forward. 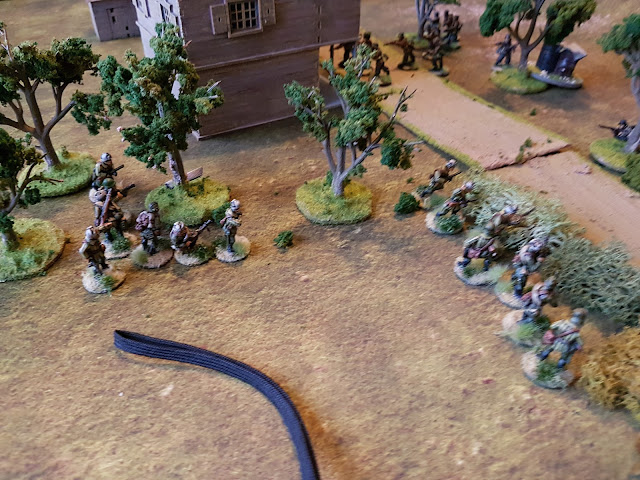 Eventually the pressure was just too much and the squads broke and fled leaving the Germans with possesion of the village.

The second game involved the Germans trying to push aside my Soviets in attempt to reach the other side of the board. This meant that I had to spread my jump off points in order to ensure that I covered any possible route of advance. I placed the HMG at the far right of the board to try and cover as much ground as possible but they ended up just too far away from the action to make much of difference. 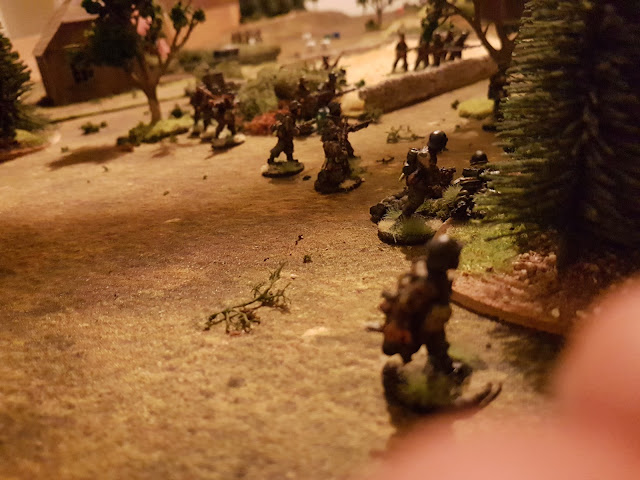 Antipixi massed all his infantry on the my left and then  rushed for the board edge. He took a fair number of casualties but the weight of numbers and my inability to find enough cover from his MG34's meant that  his troops were almost guaranteed a victory. 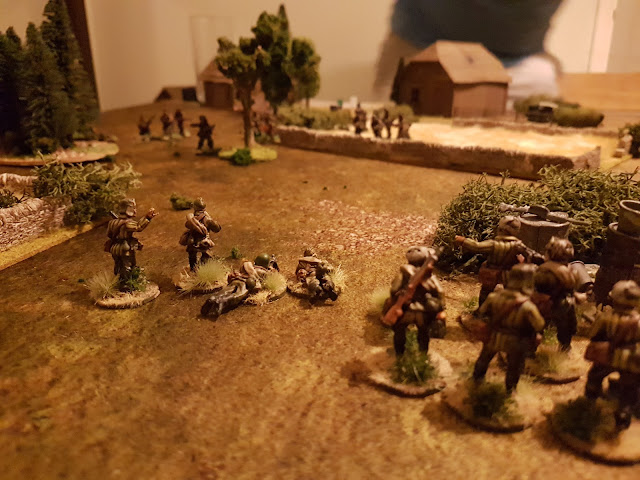 Because I had only one jump off point that was useful to me all my squads had to deploy from the same one. This created a traffic jam which meant that I couldn't bring all my firepower to bare. I couple of poor command rolls and the Germans gained important ground. By the end of the game I had caused all of the German Rifle teams to retreat but again it was the LMG teams that were handing out all the damage to my squads. Eventually the remnants of a rifle team managed to barge past my meager defenses and win the Germans the game.

So we managed two games with minimal book flicking. The Soviet forces inflexibility was shown to be it's greatest weakness. Against an isolated enemy unit they would do really well but against squads that are mutually supported they can find it hard to make decent head way. More practice is needed me think and I'm looking forward to my next games (also, i accidentally bought a Afrika Korps army. Oops)