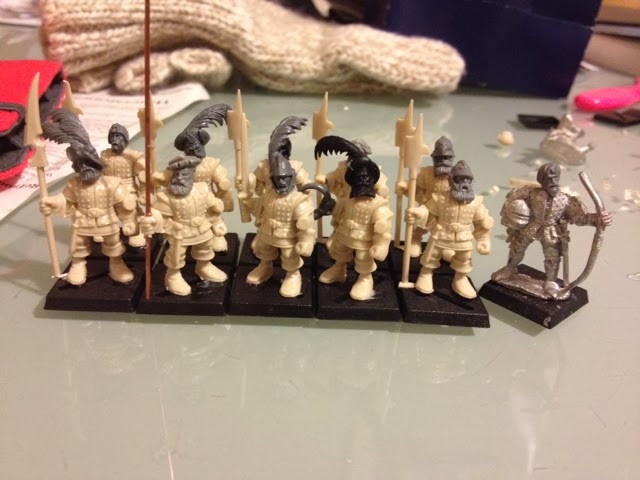 Here is where I've got to so far, I managed to do head swaps on all the men at arms figs and I've given the commander of the watch a haircut so that he looks far more respectable.

I've started to think about the fluff for my merry little band. In Edinburgh (whur am frae!) one of the gates into the old city was (and still is) called the Netherbow Port.

I always liked the name and the idea developed that my watch could be from a particular gate of the town. Other units would be from particular sections of walls and from other gates.
The commander of the watch would be the officer in charge of a watch at a particular time of the week. I reckon the Nether Port Watch have been chosen to go and right a wrong, they may have let someone into the city that they shouldn't have and they have to track down the individual or whatever he stole or never be allowed back into the city!

Good news is that I found another 5 crossbowmen so that's my 21 figures. I'll try and get their heads chopped off during the weekend but I reckon I'll get the watch undercoated tomorrow.

I might paint a banner in the style of one of the above. These are from http://www.krigsspil.dk/download/download_2.html a great resource for medieval flags and banners.
I figured that this little army would be easily expanded, each unit being a gate watch and having variations on the city flag. The Lead Adventure crossbowmen could be flashy big city mercenaries bought in my a wealthy merchant. Hopefully everybody else's little project will be the kernal of something bigger.

I'm amazed by the response to my little ranting idea but I'm getting really excited about everybody joining in. I can't wait to see what everybody produces. Cheers!