A Skinflint's guide to McDeath (act1)

Or, how the realistic Oldhammerer might play the Scottish scenario without selling one of his Children!

This christmas I was lucky enough the be given a copy of the legendary WFB scenario pack 'The Tragedy of McDeath'. Written by Richard Halliwell and released in 1986 this is box containing all you need to play 4 linked scenarios loosely based around a fantasy version of Macbeth. Well everything apart from the minatures and that's where actually playing this set of games gets almost impossible. At the time of release GW put together a set of figures to represent the characters in the scenarios. Some were specially designed figures and others were pressed into service from other ranges. 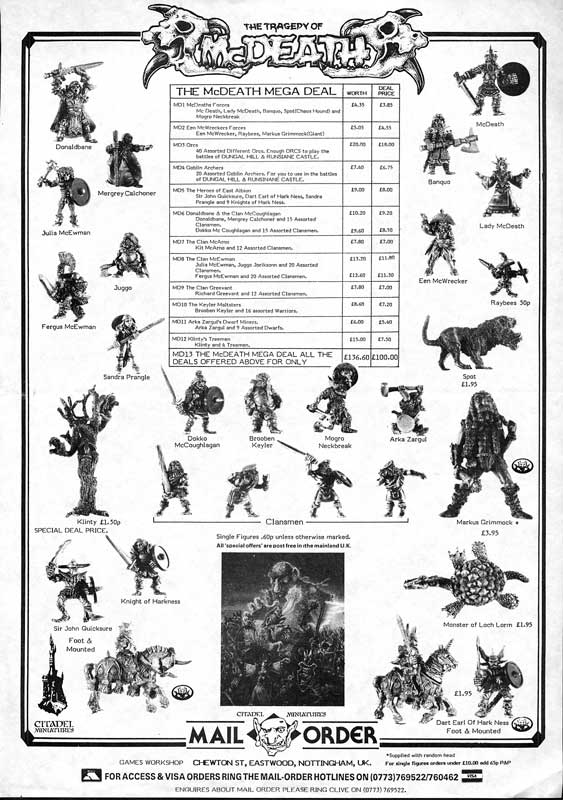 Great! Says you, lets start collecting! And many people have but hold your horses! These figures were released 28 years ago! The chances of stumbling over a complete set are astronomically high so it's off to ebay with a shopping list and some crossed fingers. Let's see if we can find the first figure on the list, Donaldbane. Tap, tap, tap....Ok, easy enough to find, 15 quid. Ok, that's quite expensive but I do know that this is also an Elric figure and can find it listed as such for 8.50. Better but still quite high. Maybe it's cos he's a character. Lets look for some of the troops, the clansmen. Tap, tap, tap....OK, again, I can find them no problem but I can't see any for less then a tenner each. How many do I need? The first scenario, Winwood Harbour, calls for 64 of them. Thats £640 at ebay prices and your going to need 40 of the guy with the sword an shield and there is only one pose! Plus 5 characters, that's the best part of 700 quid on the first scenario and 69 figures.
Now let's extrapolate a little. In all the 4 games require a total of 260 figures.
20 of these are characters listed on ebay at between £8.50 and £99 but averaging around £45 (check out Orlygg's cautionary post about paying ebay prices). This gives us a (very) rough estimate of £900 for character models, at least £700 for the highlander troops and you've still got around a 100 figures to go (assuming you are going to reuse some of the figures, orcs, goblins and highlanders for instance) and at least 8 of these are monsterous creatures of one sort or another. Lets say that you should be able to get the orcs and goblins, dwarves, fighters and brewers (no idea what figures you want to use for these) for about 3 quid each plus another 20 quid each for the monsters, thats near enough £400. So a very quick and spurious calculation gives us a rough estimate of £2000 to play Mcdeath using as many of the original figures as possible. Shit! Then I've got to paint the bastards, at my current rate that's about a year and a half without painting anything else! And I can only really use them for Mcdeath. Hmm, I think this may not be the way to go. (for those interested in that sort of thing the original mega deal in the flyer above was £100 in 1986 which according to an online inflation calculator is equivalent to £264.62 in today's money).

So to the real reason for writing the post. While trying to lull the wee Whiskey back to sleep at 3am this morning I kept my self awake by trying to think of alternative figures that are readily available today and would be suitable for running McDeath. Who cares if they aren't the originals, it's about the game, not the figures and it's always more fun to see other peoples take on things. So the following is what I thought might be my take on McDeath (if I ever got round to it - which is highly unlikely).

I think what we'll do is look at each of the commands in the game and build them individually. There are 9 of them. Yes. Nine.

Having had a think about, to avoid one massive long post, I'll split it into three parts.

So the first battle is the harbour of Winwood and calls for three forces, The McArnos, The Greevants and the McEwmans.
The McArno clan and the Greevant Clan require 12 figures each and are armed with a combination of broken bottles, shot (putt) and Cabers. Now obviously there aren't a lot of figures that are going to fill the slot perfectly but there are options.
My first choice would be Crusader miniatures Scots 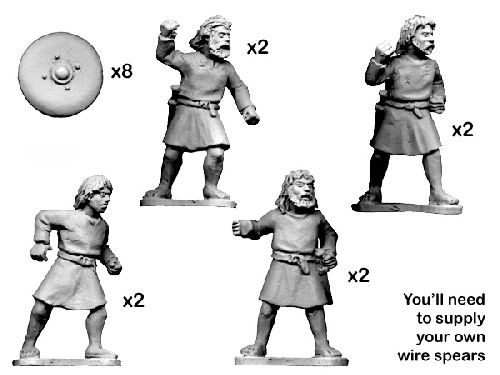 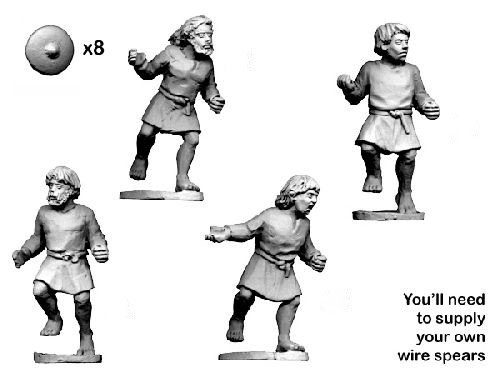 and these can be added to with the same companies Irish

All these figures come open handed and could easily be given cocktail stick cabers, and greenstuff shot and bottles, maybe even some tam-o-shanters if you feel up for it. The two heads of the clans can be taken from the command models of either range. Obviously this is only one suggestion there will be more for other clans and they will all be interchangeable.

The McEwmans require 40 clansmen armed with swords and shields. My first thought was to go for the gripping beast plastics.

The Dark age warriors set gives you 40 unarmoured figures which is pretty damn spot on (and at 22 quid about as much as two of the clansmen off ebay!)
Other alternatives for shaggy clan warriors might be Black Tree Designs Ancient Germans

as well as lots of different dark age types that could be mixed together to give you a lovely hairy clan.
Then of course their is Wargames foundry who also do a lovely range of picts

as well as some very characterful ancient germans

This is not an exhaustive list of figures but it's defiantly where i'd start for my Mcdeath forces.
We now have to consider the characters for the McEwman faction.
First off Julia McEwman, she's pictured as an armoured woman carrying a mace and the obvious choice would be to go to Reaper miniatures and to type my needs into the figure finder which gives me this figure

Cool. But I'm so tempted to go a bit over the top here, maybe one of foundry's Daughter's of Freya

I was thinking of Skeggjold (you dirty boys!)
Or maybe go down and see what Hasslefree have for me

Libby? They've got loads more but you get the idea.
I have to say I most tempted to go completely over the top and get....

from Copplestone castings, and why not?

Julia's Bodyguard is Juggo Jorikson - an alcoholic dwarf with a big axe.
Now there are no end of dwarf ranges out there so I'm just going to focus on the ones I like, the ones that still have that old school charm that we are all after.
The first is the old Heartbreaker Dwarves that are now sold through Ral partha Europe. These were designed by Kev Adams and are full of stunty madness. 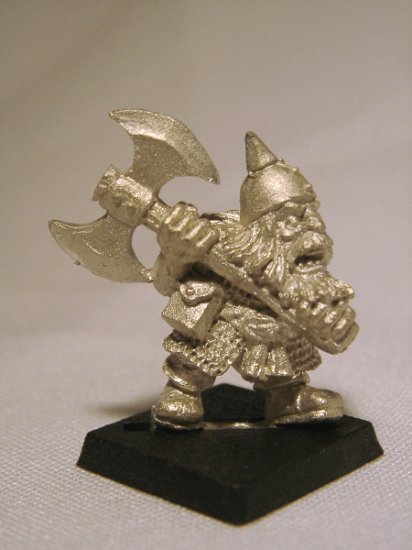 Lead Adventure do some really nice dwarves, they are a bit expensive but they are gorgeous little figures with bags of character.

And the third range I'd consider is back to Black tree designs who carry the old Harlequin fantasy range.

Maybe not as nicely sculpted as the other two ranges but certainly containing some gems.

The last character for this command is Fergus McEwman. He is described as being 6 and half feet tall and built like the proverbial outhouse and armed with a sword and shield.
Ok, the foundry range of vikings are fairly big and some suitable figures present themselves

Or maybe go for hasslefree 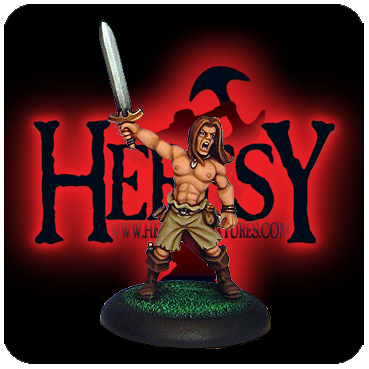 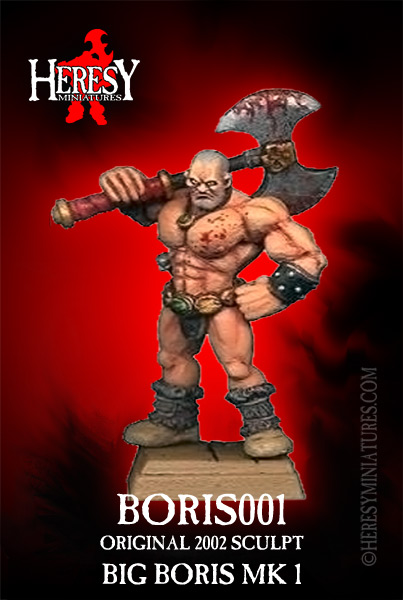 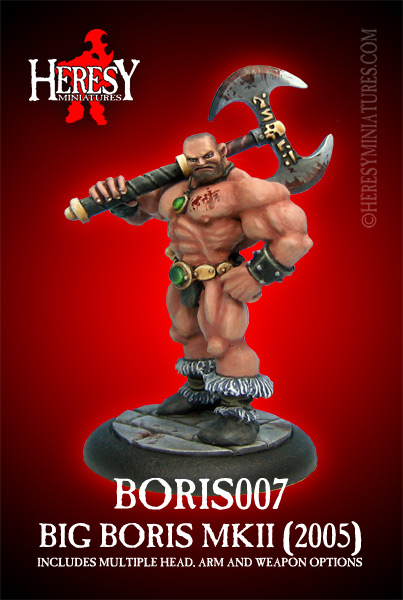 Since we've gone down the rabbit hole we can look at the old Fantasy Warriors range from Grenadier, available from Forlorn Hope Games (as well as EM4 and Mirliton)

You'll find a nice wide range of barbarians, designed by Marc Copplestone again, loads to choose from.
If you wanted something a little less...erm, naked, then have a look at Gripping beast again or Footsore miniatures where the old Musketeer miniatures range lurks, and they have quite a few good looking boys in amongst their ranges that'd suit (to be fair they'd suit quite a few of the characters from the game but that's up to you!)

Right, that's act one done, I'll let you peruse through my ramblings and agree or violently disagree but at least I've started you thinking about which figures you might want to use in the scenarios. It's also seems to be a handy repository for alternative oldhammer figs. I'll be back with Act two ASAP, cheers the noo!