As well as virtual wargames days, I've been taking part in other wargames and wargames adjacent activities to while the weeks of lockdown away. Several of these activities involved variants of Kriegsspeil played over Discord or, in one memorable event, over FB Messenger.

So, I here you ask, what the bally hell is Kriegsspeil. Well, to be honest, you could probably go and google it and get yourself a decent answer, but it is essentially the original wargame. Invented by a Prussian officer called Von Reisswitz it was further developed by his son, Georg Heinrich Rudolf Johann von Reisswitz (great names these Prussians). The game proved popular amongst groups of games enthusiasts and even some of the Prussian Princes joined in the games. Reisswitz died in 1826 but the game was kept alive in clubs of enthusiasts. Over the years, expansions and rules changes improved the game and made it more relevant. The large number of officers who played is said to have led to the Prussian victory against France in 1870. Enough history though, you can look that up yourself. 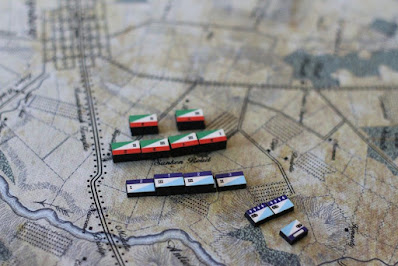 Essentially Kriegsspeil is wargame based on maps. There is a Blue team and Red Team and an Umpire. Each team will have a map of the area to battled over, this will usually be a realistic topographical map but is often an imaginary place in the original game. They will also have blocks representing the troops in their army. These troops are divided up between the team members and an overall commander will be elected. This will give each player the equivalent of a brigade or division dpending on the scale of the game. An objcetive will be given to each team (secretly so that that other team are unaware) and the teams are then given some time to plan. Once the plan is decided upon each of the players can be  separated from the other member of their team so that they are essentially playing in isolation or they might play together. However, the teams do not control their troops, instead they write down orders and these are sent to the umpire who translates the orders and decides how the troops carry them out. He then sends information back to the teams and they have to react to this (no matter how limited it might be) and send orders back to the umpire. You can see that if the brigade commanders are separated from each other, the game becomes about second guessing what your team mates are doing as much about what the enemy are doing. Can you trust your team to stick to the plan? Can they trust you to stick to the plan?

When your forces coe into contact with others, then it is the Umpire who roles dice to see how well your troops fair and the reactions that this causes. Often, when playing, it feels like you are blundering around in the dark trying to pin down an elusive enemy and....all of a sudden...it's all over! Something happend on some other part of the battlefield that ended the game. You are left confused and full of adrenaline and wonder what the bloody hell just happened. Only when the umpire lets you have a look a his master map do you then begin to understand where everyone was and who was doing all the shooting. It's a unique experience and one that has translated to the internet age pretty well.

So that's Kriegsspeil in it's basic form. But the games I've been playing this year have come in a variety of forms. Here is a brief over view of them.

1918 - In this game I was given the role of Colonel Oats who was a Staff Officer sandwiched between the British Commander in Chief at Amiens and the Corps Commanders (3 if I remember rightly), all played by other players. The C-in-C was busy trying to organise a big counter attack against the germans and the Corps Commanders were busy get there faces punched in athe front every day and I was the one communicating between them and ensuring that supplies and ammunition was coming in and being delivered to where it was needed. As you can imagine there was a lot going on. There was a French Army to the south with their own commanders, staff officers etc that we had to liase with. There was the 2 Colonial Corps that were to be used for the planned offensive (all of these being actuall players) and then there was the German forces and all the players on that side. Rich Clarke from the Lardies was running the show as an umpire and he did a brilliant job, lord knows how he managed it. In the end the Germans launched a massive surprise offensive right into the face of the weakend corps in the middle of our line, causing absolute chaos with communications collapsing completely as one Corps commander was captured and another dissapeared. The day was saved by some very lucky dice rolls froma single unit just as the Germans were at full stretch, stopping the advance just short of Amiens. A once in a lifetime kind of game. 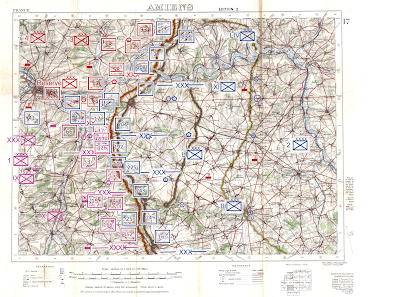 Bash on Recce - This game took place in late July 1944 and involved the players taking the parts of individual troop commanders of a British Recce squadron. Each of had a troop of 4 vehicles, two Daimler armoured cars and two Daimler Dingo scout cars. Our task was to push south from our starting point and locate routes south from the town of Caumont and locate enemy forces. This game foccused our little troops zipping about the back roads of Normandy and trying not get our heads blown by a bunch of old men with machine guns. Great fun and a really unique take on the game. 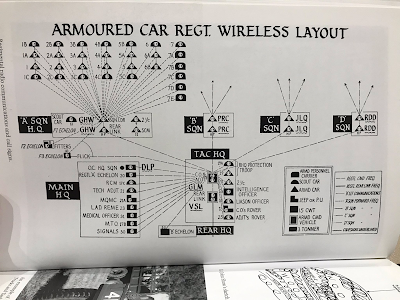 Classic - We played a classic Kriegsspeil game with some of the staff from Wargames Soldiers and Strategy magazine. This was over in an evening and I seem to have won by default as I managed to get in behind the enemy lines without the even being aware I existed. While my other team members were being shot to bits trying to get over a bridge, my column had a lovely walk in the countryside! 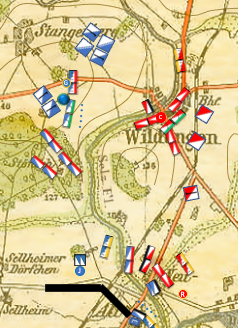 Master and Commander - As the name suggests, this game was very much about Napoleonic naval shenanigans. I was Captain Oats of the HMS Absentia, sailing around the carribean in a squadron of ship strying to track doen some Frenchies. The game included a raid on a shletered harbour with marines being dropped off to attack the fort and canonballs flying every where. 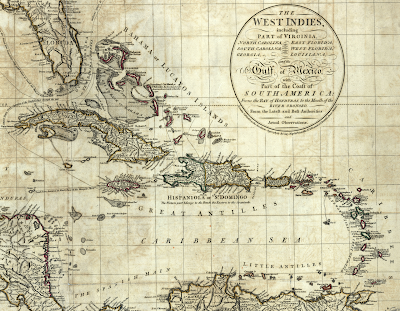 Where Lardies Dare - We're currently in the middle of a game where we are playing a crack unit of commando's dropped into enemy territory to kidnap a high ranking officer from a castle. Sound familiar? can't much about this one as we are knee deep at the moment.

I also played in a medieval Kriegsspeil where we played French and Spanish Noblemen invading the Isle of Wight. This one was run entirely on FB Messenger and run by Mark Backhouse.

If you are at all interested in looking into Kriegsspeil then it's very lucky that my lovely hosts, the TooFat Lardies actually produce a copy of the rules so how about you pop along and check them out Kriegsspeil