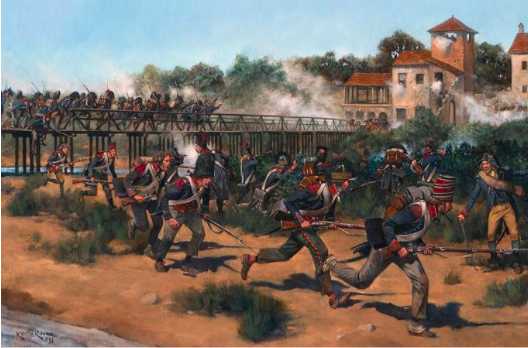 Everyone needs a lockdown project or two and sometime last year I stumbled accross the Trent range of Revolutionary war figures. I bought myself some Hungarians to start with a promptly got distracted.

With VL4 finished I figured I'd get back to them and finish them up before moving on to some French. These are pleasingly chunky models with a nice bit of character and I beleive they are sculpted by Matt Bickley. I finished 3 groups of 8 Hungarian Fusiliers and a couple of officers (the Austrian army was divided into Hungarian regiments and 'German' regiments, although the variety of people that actually served under these two designations were quite broad.

Happy with my lot I decided to order some French....and then Jeremy announced the date for VL5. I had about a month and a half to paint 3 forces and terrain if I wanted to use these figures for a game. Of course I could do it, why the hell not?

First up were some French Ligne. I noticed one figure had fancy Grenadier tufts on his shoulders so decided to transfer him to the next unit which meant I needed to drop in another figure to the Ligne units. I was going to use a standard bearer but I clumsily ruined his face trying to drill out his hands so the units got a drummer instead. There are 3 packs of French Ligne in the range and they all have nice variety in poses and character. Some have trousers and others breeches. I painted them all a standard white(ish) as I was in a bit of a hurry but when I get more they will have some more revolutionary colours sprinkled through their ransk.

Again I painted up 3 groups of 8 and a couple of officers. This makes an adequate little force for a multi-player game of Sharp Practice. These guys will no doubt be used down at the club when we get to reopen as well so I was rather pleased with their finished appearance.

Next up I got myself some German infantry for my Austrians. These figures aren't as nice as the Hungarians or the French. I don't know if some of them were by a different sculptor or if they were rushed but they lack the detail, character and swagger of the other figures in the range. Still I soldiered through and got 3 groups ans officers completed. There are no matching Grenadiers in the range for some reason and while I had planned to do head swaps to raise a group or two I just didn't have the time. These chaps did get some natty pink facings though so you can't argue with their style.

So that was the Austrians completed (or so I thought). They were left unbased as i did all the figures in one mad sprint of basing the night before the game.

I actually ended up doing a small group of Hungarian fusiliers as third rank skirmishers and 3 dragoons as a scenario piece before the fateful day so there are still more to add to this photo.

Lastly were the French specialists. This constituted two groups of Ligne Grenadiers and one group of Legere skirmishers. These guys are lovely figures. There are 4 packs of 4 Grenadiers in the range and I decided to mix Bicornes and Bearskins in the units. Cos why the hell not? There are 8 marching figures, 4 firing and 4 loading to it was fairly easy to fit them into themed groups.

The Legere figures have a pack of 8 skirmishers and a 4 figure command pack with a nice mix of figures. I'll be buying more when I expand on this project some time next year so that I can use up my spares and the other figures from the command pack. Again, these are lovely figures with loads of detail and superb posing.

With the day of the games closing rapidly I needed to get on with basing the boys. I used pva and sand and then sealed that to the base with a mix of paint, pva and water. When that was dry it was given a bit of a selective dry brushing and then given a couple of tufts and static grass.

All the figures were given the same scheme so that the whole project fitted together.

One more figure, a French commander to be used as a deployment point in the game was finished just in time (a matching Austrian one didn't make it) and everything was ready for soem virtual gaming. VL5 was here!