So having played a couple of solo games with my Filibusters I made a couple of decisions. Firstly, a whole bunch of the models that is chosen to use were described as 'French Foreign Legion / Filibusters' on the Foundry website. I realised that if I touched up their uniforms they could be the start of a collection for playing games set during the French intervention in Mexico, better known as the Maximilian adventure.

I also realised that I wanted a more mobile unit to support the Filibusters units. So I decided to put together a unit of Cavalry that could operate either mounted or on foot. They would essentially be dragoons. As I already had a few mounted models ready to paint and I needed matching figures for when they are dismounted, the requisite figures were plucked from the ranks.

All this shuffling meant that I had huge gaps in my Filibusters units. Which means it's time for some internet shopping.
First up I bought 2 sets from the Foundry Old West which included two mounted figures and two matching foot figures. Along with figures I already had this gave me 9 mounted figures (unit of 8 plus leader) which could be dismounted to give 7 skirmishers (unit of 6 plus leader). 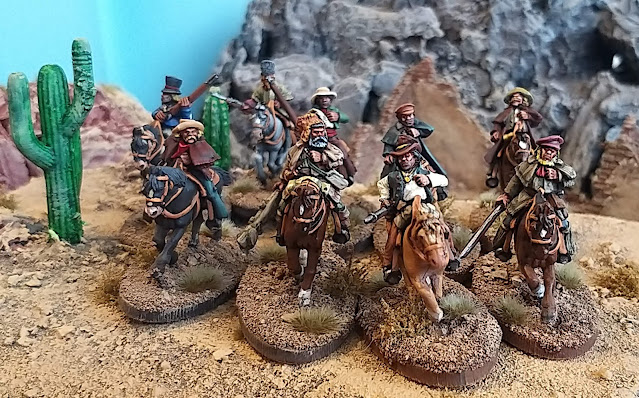 I had a great time painting these guys and they are now one of my favourite units. 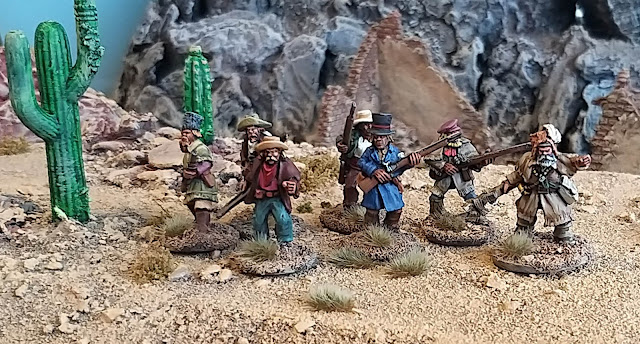 Next up was to sort out the infantry.

Most of the figures I bought came from the Artizan Alamo range plus a pack of plains infantry from Foundry and a couple of figures from Boothill (I'll be buying more of these!). They were all painted to match up with the existing figures and included a banner bearer that you can see at the top of the page (cos a fancied a little flag) with a banner based on some of the designs for flags that Filibusters used when declaring their own states.

As a final touch I made a couple of deployment points for games of Sharp Practice. The Mexican forces were given a group of angry women and a put upon husband that are obviously complaining to the Mexican commander about the shameful mess the Yankees have been making of the village. The Yankees themselves were given a photographer and journalist to reflect the American publics habit of lapping up the latest exploits of the Filibusters adventures.