Bearded, grumpy little dudes that spend most of their time underground. 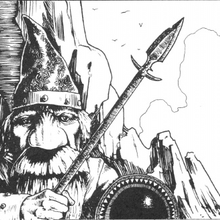 What does it say about Gnomes in the new rulebook.......erm.....nothing. What the hell? Gnomes aren't in WFRP? What about the old one..... they are in WFRP but theres no way of playing them as PC's WTF! Am I imagining it? Are Gnomes not a thing in Warhammer?

Well, strictly speaking Gnomes were part of the Warhammer world but you really had to go looking pretty hard to find them. They appear in the WFRP betsiary but all the additional rules and lore, as well as rules for playing them as PC's appear either in White Dwarf articles or Supplements.

Which is weird when you think about it. A race that is shrouded in secrecy, hides underground and guards it's secret's carefully can be completely overlooked in the game (so much so that I'd completely forgotten they appeared in the bestiary till someone pointed it out). Some folk might not even know they exist. It's almost unique that a race's status within the rules of the game is a perfect allegory of their existance in the background. The majority of folk in the Old World would see Gnomes as an old wives tale, something featured in the stories you tell to your children (the ones not meant to scare them witless so they don't stray out of the village), if they had heard of them at all that is.

Which makes you wonder....looking at things with a purely WFRP slant, how much does your average villager in the arse end of nowhere, empireshire, know about the kinds of creatures he shares his world with? I'd imagine very little. Most hamlets won't have copies of 'Ye Olde Guide to Scary Monsters and Super Creeps' readily available in the public library (or toilet as it's more frequently known). And even if they did, the chances that said yokel could actually read the bloody thing (or know that a book wasn't for ripping out pages and wiping your arse on them) are fairly slim. 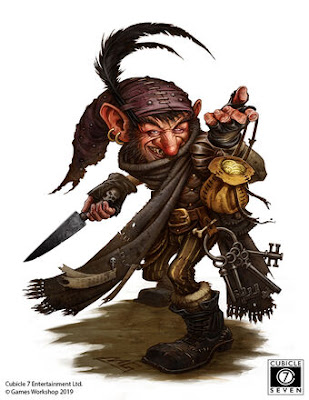 If you think about the experience that most european peasants would have had in the 15th and 16th centuries, they'd have thought the blokes from the city were frigging aliens compared to their neighbours. And imagine farming dirt for 40 years and suddenly being confronted with a bloke encased in shining, metal armour, perched on top of a massive horse, barking orders at you. They'd have been positively shitting themselves. Their frame of reference would have been that there were people more powerful than they were, that lived far away, but actually being put face-to-face with them would have been a shocking experience.

The same would feasibly be the case for the creatures that inhabit the Warhammer world. Safe in your little thatched hut, you'd have a notion that there were things out there that you wouldn't want to run in to on a dark night but you wouldn't know their race or classification. You wouldn't know if the millers daughter was eaten by a Beastman, kidnapped by a Fimir or chopped up by an Orc. All you'd know is that something horrible got her and you don't want the same thing to happen to you.

I wonder how many people consider playing RPG's like this. Where the characters start of as completly ignorant of the world outside the bounds of their village and the campaign tracks the opening of their eyes to the horrible place the world actually is. It would seem to me, with WFRP's pathetic aesthetic and the careers system would be a perfect fit. A GM could produce some starting characters to fit the theme and crank up the rural horror in order to produce a proper scary journey for the players. Of course this would require the GM to avoid simply describing the monsters they encounter by their species names and instead go with Steven King like descriptions of the things that might be encountered instead. To be fair though, that should be part of the fun.

In Fantasy Battle game this would obviously be harder to do but I can imagine small groups of militia type figures being pitched against something mutated and scary with the fear and terror rules being used to try to hamstring the militia's ability to make coherent strategies to deal with the situation. The big bad beast could be given some blinds (a bit like the blips in spacehulk) so that the militia never quite know where it is. The more fear tests the militia fail, the more Blinds appear on the table, illustrating their climbing panic and paranoia. Only approaching a blind with a lamp or a big pointy stick will show whether it was just the fear making you see and here things or whether there something big and toothy going bump in the night.

They must be related to dwarves right?

But if we are saying that all small folk are related then does that mean that Halflings are related to them as well?

(I know, I know!
Basically Gnomes are another sort of European fairy but one more asociated with the earth. In some cases they are even seen as an earth Elemental. In fact they were probably the invention of Paracelsus who included them in his study Nymphs and Fairies in the 16th century. In that he describes them as earth elementals. I also quite like the 18th century notion that they are the reincarnation of prudish women (Alexander Pope's, the Rape of the Lock) and that they spend their lives looking out for the interests of other prudish women.
In the 19th century the became more of an earthbound foil to the more flighty and giggly fairy, being stolid and grumpy.
It wasn't until after world war 2 that the popular image of the Garden Gnome came about and it is this image that sticks in peoples minds to this day and the fact that they were styled after the Dwarfs in the Disney classic probably goes part of the way to explaining their popularity.
As with everything else in the warhammer world, Gnomes are hangovers from D&D. GW made them for the game so when Warhammer came along it made sense to fit them in somewhere. They just never quite stuck. The Out of the Garden artcle in White Dwarf gave lots of detail for using them in WFRP and they feature again in Rough Night and Hard Days fro WFRP4 should you be wanting to check them out.
What? Did you expect me just to reprint the pages for you? Don't be so lazy!)
Pointless Anthropology RPG's