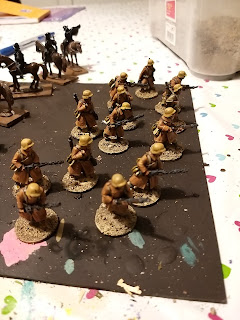 Being a Teacher you get to sit and watch other people delivering Assemblies to bleary eyed and disinterested teenagers on a weekly basis. One this morning was all about how new years resolutions generally fail and that they end up making the person feel worse about themselves as the feeling of failure compounds all their worst fears about themselves. 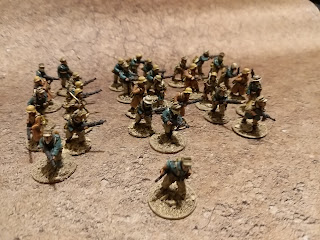 The member of staff, instead, suggested to the pupils, that they pick a word to use as a touchstone for the rest of the year. A word that they could return to throughout the next 12 months and use to modify their behaviour multiple times. The member of staff in question used Healthy as his example. He talked about how he wanted to go to bed earlier so that he would drink less cups of coffee so that he would be feel better at school. He did all this while wander up and down the raised seating where the kids were patiently listening to him. (i correctly surmised that he'd been given a fitbit for christmas and he was trying to keep his steps up). 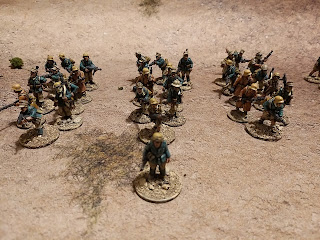 "So what has this got to do with pictures of miniatures you keep showing us?" you may ask. Well, I figured out that last year I painted over 300 figures and bits and bobs and so my painting output and terrain building are going pretty well. The figures that i'm liberally splashing about the page are the last 49 figures I painted in 2019 and, at he top of the page, the first 13 that I painted in 2020. Put together they make up 6 squads, or two platoons of German Afrika Korps panzer Grenadiers (I originally only intended to paint one platoon but them I realised that I had enough for an extra squad, so I painted them as well, and then I realised if I organised them as an Aufklarungs platoon (basically the recce platoons of the Panzer Divisions) then I only needed another 13 figures to make two platoons. So that's what I did). 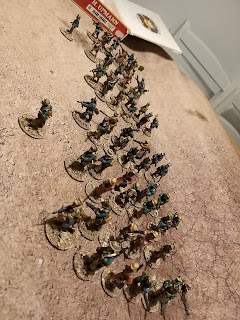 The majority of the figures are Artizan Design Afrika Korps figs but some of the great coated MG34 teams are by Crusader (Artizan only do two MG34 figures and I needed 12 in total for the two platoons) figures with greatcoats (yes some people wore greatcoats in the desert!).
But back to the point.....I'm getting stuff painted and I'm getting some games in.....the problem is that I'm just not documenting stuff on the blog as much as I used to. I think the problem is that I'm waiting till I feel something is 'finished' before I share it and as my project are getting bigger and longer it means that the gaps between posting are getting bigger and longer.

In addition to the gaps between the ends of projects getting bigger, I've got into the habit of posting Wips on twitter which is much quicker (@coljmurray for all you twitter users out there). I need to get back into the habit of blogging but I need to do it without making a rod for my own back. I don't want to announce some big resolution about posting so many post a month only for it to come back to bite me in the arse in 2 weeks time (lets be realistic here) and have the self imposed guilt of failing my own goals.

Lets see if I can keep it up.