Runequest - We were playing it all wrong..... 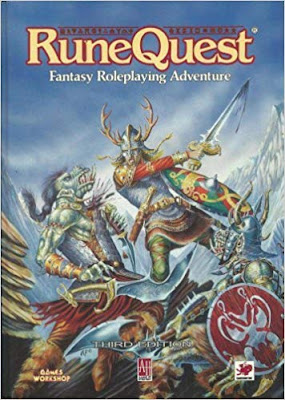 When we were but mere lads we were introduced to world of miniatures and roleplaying in a variety of ways. I had cousins who gave me stuff, Neil had an Aunt and her friends who gave him stuff, another friend had a brother who played D&D and taught us to play at lunch times at school, I perused Dragon magazine in the big Asda in town. Whatever the route, we were into it. The first game that we actually took it upon ourselves to play was Runequest. Now, at the time of our playing, Runequest was in it's 3rd edition which had initially been released in 84. By 87/88 the version that we played was a hardback book published by GW, it had other companies badges on the cover (Avalon hill and Chaosium) but we didn't know who they were or why they had their badges on a GW book (this is how you think when you are 12). We read the rules, figured them out, managed to start playing games and we were off. We played it on and off for the next 3 or 4 years.


The thing is, 3rd Edition is a very odd version of Runequest. For a variety of reasons, the people the published 3rd Edition essentially jettisoned the entire background of what made Runequest unique. The world it was set in. You see, we didn't bother with Advanced Runequest or Runequest Monsters (which in the boxed version of 3rd had come in the set but were published as separate books by GW) cos we knew how to play and the rules had enough monsters for us to get on with. We ignored Griffin Island because land of the Ninja looked way cooler! So in essence what we got was a fairly generic fantasy roleplay game with no fixed setting. It didn't bother us, we just got on with it. 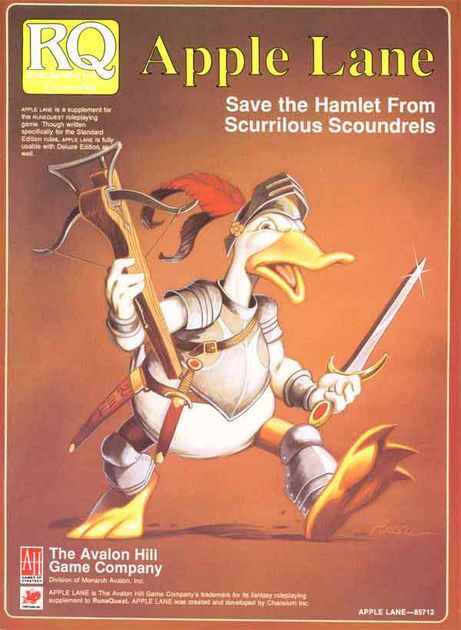 I knew that there were supplements out there for Runequest that weren't published by GW. Adverts in Dragon magazine or old copies of White Dwarf. Old scenarios that we came across. Things we found on the shelves of Macs Models or in Virgin. Stuff for sale at Claymore, the games convention in Chambers street. I knew that these were for older editions of the game but they didn't seem to make sense in the light of the background free version that we had been presented with. The image of the armed and armoured Duck from the cover of Apple Lane became burned into my memory and life moved on.

30 odd years later and I'm back to rediscovering my RPG roots. 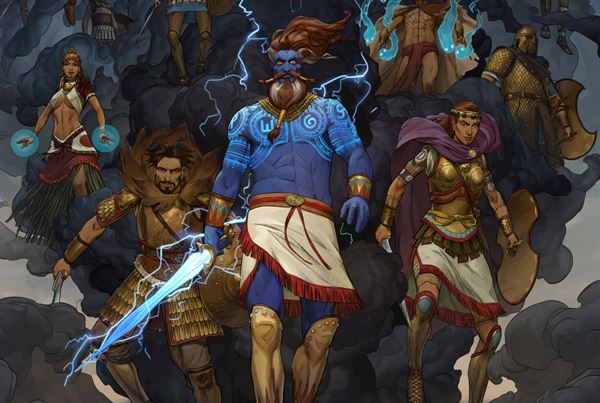 The new versions of WFRP and Runequest are big, beautiful books and in themselves are well worth the investment. Alongside that I've been reading a lot more RPG discussions on twitter and getting stuck into podcasts such What would the smart party do and, especially, The Grognard Files. The Grognard files revolves around Dirk and Blythy reminiscing about their days playing RPG's in the 80's and their journey to rediscovering their love for the hobby all over again. What is telling is that the Grognard boys are a bit older than me, roughly 7 or 8 years as far as I can tell, so they were playing Runequest (as well as Traveller and Call of Cthuliu) right in the sweet spot of time when White Dwarf was britains premier RPG magazine (they appear to have dropped out of White Dwarf's orbit around the same time my friends and I fell into it). Their episodes about Runequest piqued my interest and I was to find out all sorts of details that I had no idea of previously. From that I investigated the new version, Runequest Glorantha, and eventually bought it (a year late I admit) and I've had my nose stuck in it ever since. 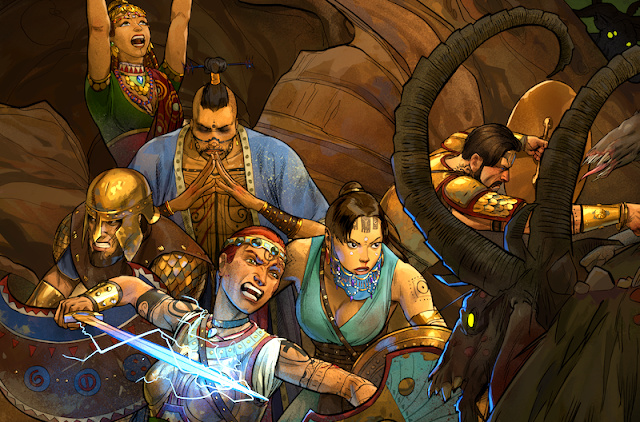 Glorantha turns out to be a beautifully complex world, crammed to the gills with 40 years worth of myth, story and history. Old school Runequest players will spitting out their coffee and shouting 'Noob' at me in various accents but it's a revelation to me. As I talked about above, the Runequest that we played was barely more than the Basic Roleplay system with a couple of odd monsters tacked on, we had no idea of the background that we had been denied. As far as I can tell, the licence was given to Avalon hill, who were a wargames company, as Chaosium were concentrating on the run away success of Call of Cthulu. Avalon hill decided they wanted a more generic system that could appeal to broader market of gamers (i'd imagine that they were basing this on D&D's lack of background) and they stripped out Glorantha, assuming current players would still use the setting and new players would pick it up through supplements (that didn't come for several years). 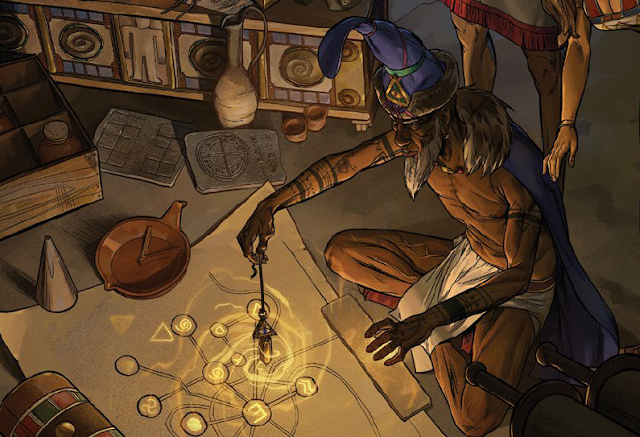 Glorantha is a world of magic. Magic touches everything and is a tool that everyone uses on a daily basis. The magic can be controlled and used in different ways but they all have relevance to Runes. People, tribes, clans, cities, empires have affinities with particular runes and Runes have connections to Gods and Elements and other great powers. Knowledge of how to use runes and the methods of combining and focusing them are the purview of cults, cults dedicated to Gods, Goddesses etc. Almost everybody is part of a Rune Cult in some way and each one gives the people of Glorantha a sense of belonging but also a place to learn and a source of power. Your family and clan and probably your tribe, will all belong to the same cult. 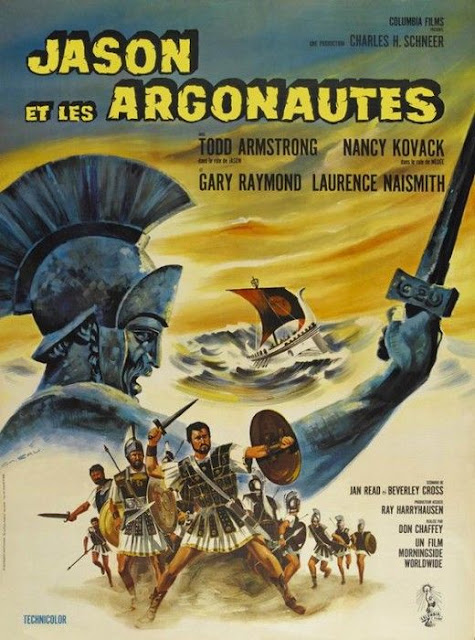 The key to understanding the way Glorantha is pitched is normally to say that it is a Bronze age civilisation. This will give you some idea of how the world looks but it helps to look into that at a deeper level. Think of Brad Pitt in Troy. His character is a Demi-god. Meaning that one of his parents was a God. God's were hanging about the world doing stuff, making babies, being powerful. Now think of the warriors and how they looked. Think about Jason and the Argonauts. Think Clash of the Titans (no, not the remake). This is what Glorantha is about, God's and Demi-gods roam the lands. Hero's of legend come forth to lead their people in victory and battle fabled monsters. Add to this already heady mix, unique non-tolkeinian takes on Elves, Dwarves and Trolls plus unique races like Ducks and Baboons, fully sentient and anthropomorphised versions of creatures familiar to us, as well as many more races that all add important flavour. Then stir in Chaos that seeps into the world and undo the order that world seeks. Chaos brings it's own creatures such as the ubiquitous Broo (where GW beastmen come from) and the frankly silly Walktapus. 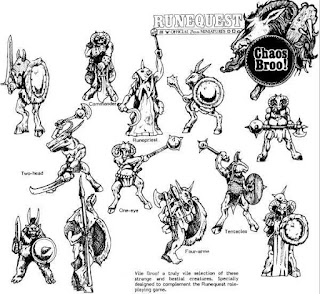 Your character is an adventurer in this land. You might be a Sartarite seeking to take part in the Hero wars to ensure that your homeland stays free of the occupation of the Lunar Empire that so recently ended. You could be a member of one of the tribes of Prax that ride their beasts across their lands arid wastes, drawn to Dragon past by deep family secret. The character generation process is in depth and fascinating, going as far as exploring the lives of your grand parents to see how this affected your upbringing and therefore the passions that guide your characters behaviour. All this combined with a combat system that is deadly (always worth knowing you can die in a fight) and lacking in get out mechanics (no fate points for you!) means that you can really be invested in your characters and their lives. 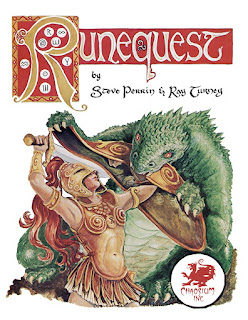 So, it turns out, that when we were kids, through a twist of fate, we stumbled upon Runequest and we played it and remember or games fondly. It wasn't our fault that the version that we stumbled upon was void of it's main strength, the world in which it was set. How were we to know? There was no internet back then, we just got on with it. Only now, 30 years later, am I waking up to what we missed, which you can either look at as a terrible shame or an amazing opportunity.