For the love of Duck!

July 12, 2019
A couple of comments from the Runequest post the other day had me thinking about Duck's. If you aren't aware, one of the creatures in Runequest, and one you can take as a PC should you so desire are a race of intelligent, sentient, anthropomorphic Ducks. 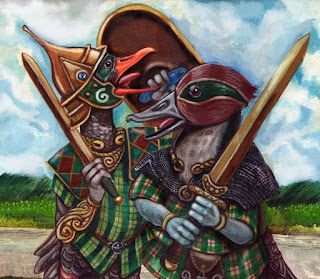 These guys speak, fight, wear armour, adventure, fall in love etc etc, just like any other race in any fantasy setting but for some reason, some people find them really disconcerting. Some people admitted to finding the idea of Ducks off putting,  the very thought that a game could have a such a race included in it and still be taken seriously was anathema to them. I pondered on this for a while.

It's not as if it's a concept that we have never encountered and are therefore unable to bend our imagination around the image of conversing with a Mallard. I mean, look at kids stories, Jemima Puddleduck in the Beatrix Potter stories, she gets pissed off with Human interference and goes off to get charmed by Fox who's only intention is to eat her. We didn't question that the duck was able to make decisions (poor as they may have been) or wander around in a little blue bonnet. Nope, we swallowed that whole. 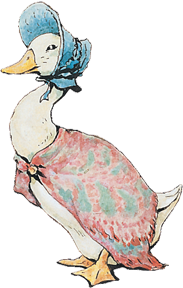 Then there is Donald. I don't think that sod ever actually sailed in the navy but he was happy to wander about in the uniform with no trousers on for 80 years of so. That's a case of Stolen Valour if ever I've seen one. Still, he had pretty full life, he had a wife, uncle's, nephew's (what happened to his Brother?), drove around in his little car, lived in a house, went on holiday, was best friends with a mouse, all of which he managed to do without ever actually bothering to make himself understood at all, just quaking furiously at everything and everyone. Maybe he was just drunk all the time which would explain the lack of trousers. How Daisy put up with his shit all those years I'll never know.

Then youv'e got Daffy. Wisecracking Black Duck wandering around annoying Elmer Fudd and not even bothering to try and get dressed, accept when the joke warranted it. He's played everthing from a lunatic vigilante to a greedy gloryhound and nobody bats an eyelid. Yup, the third most common character in the Warner Brothers golden period was even a intergalactic space hero as well as gumshoe private eye. Nobody found there ability to immerse themselves in the story ruined by a duck then did they? 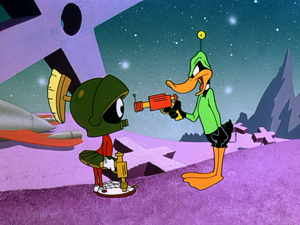 For our British Audience, who could forget the wonderful Count Duckula, the vegetarian, Transylvanian who first made an appearance in Danger Mouse. His adventures followed his attempts to become famous while avoiding the attentions of vampire hunters, Igor's attempts to turn him into a real vampire and all sorts of nasty, ghoulish monsters trying to ruin his plans. Oh and a teleporting castle. 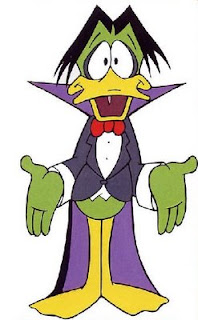 However we must take some time to focus on Howard the Duck. Prior to the disastrous film (the first of the Marvel creations to make it to film by the way), Howard was actually a reasonably succesful comic book character. He first appeared in 1973 in "Man-thing" and went on to run in own strip in the comics where he battled a variety of silly comic-horror creations. Howard's story was that he was transported to earth form his home planet where everyone was a Duck. He was trapped a world full of hairless talking apes and he had to make the best of things. 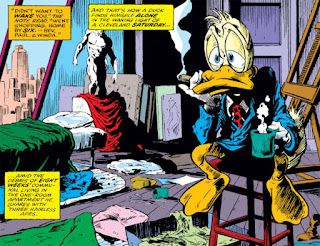 The difference to the previous duck is that Howard was flesh and blood and not elastic and putty. If he died it was going to make a mess, just like Human beings. During the presidential campaign of 1976 Howard's own comic featured a fictional political party and led to thousands of voters in the real life election spoiling there votes by writing 'Howard the Duck for President' on their voting slips. Howard wandered on in various Marvel publications for years but he is most infamous for his 1986 film. What was originally meant to be an animated feature got turned into a live action film when George Lucas decided to use it to fulfil a contractual obligation he had. 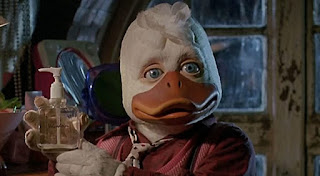 The film panned at the box office. It is the lowest rated film that George Lucas is connected to and he made the Ewoks: The Battle for Endor. In 2014 the new york time listed Howard the Duck as one of the costliest flops of all time. However, the film failed because of the writing and plot, not because of the Duck (well maybe the love scenes with the duck) the character himself is pretty loveable and has become a cult favourite. He's even turned up in three of the recent Marvel films so he can't be that bad. 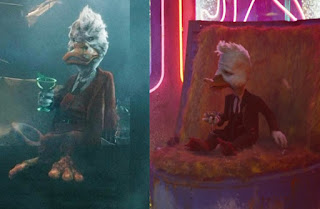 The point i'm trying to make is that we are totally prepared to accept anthropomorphic ducks in other areas of entertainment, whether they be books, cartoons, comics or films but for some reason, stick them in a fantasy RPG and people get all 'Ooh! A duck? Really?' The reasons for that could be many, i'm guessing that peoples wish to see everything as a heroic and mighty or dark and gothic when it comes to RPG's might be an important factor. The connection with ducks being silly cartoon characters may be another brain fart that find far too difficult to deal with. But when you consider it, a Duck character is silly. Howard the Duck was at the height his pre-film fame when Greg Stafford decided to put him in the first edition of Runequest. Ducks have the power to undermine the pomposity of an overly serious fantasy world. The idea of them as goofy cartoon characters is such an ingrained one that it's hard not assume that that is all they can be. From a Runequest world view, Ducks are just as sentient as every other race in Glorantha, maybe the constant teasing and silliness that humans present them with is enough to drive them to distraction. Maybe they have a point to prove and a massive chip on their shoulder.
It is also possible that players and games masters are put off because the challenge of being able to play the game 'straight' when Ducks are involved. Maybe they feel that they aren't up to it, that playing or interacting with a Duck would just be too difficult. Maybe the GM just can't do a duck voice..... 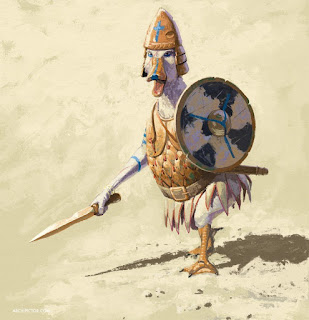 Whatever the reason, Ducks should be seen as part of a continuum that has touched every stage of your life. Talking Ducks have always been there and you have accepted them and taken them into your heart. Having them in an RPG is only the next step. Runequest gives you the opportunity to take your relationship with anthropometric Ducks to the next level. It's time to get Ducking serious.
Runequest