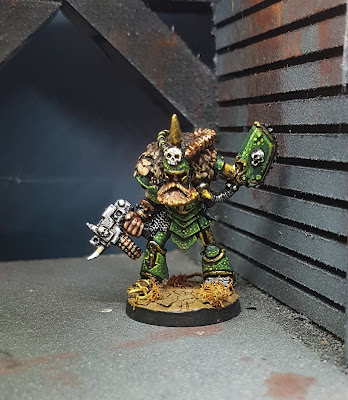 Once a year a bunch of us who talk shit to each other every day, manage to get together in the same place and play games against each other. This year I put forward the idea that we should give playing 40K Warbands from Realm of Chaos : Slaves to Darkness. And so it was that we rolled (and cheated and re-rolled and fudged) our warbands and now, as you will have seen from Axiom and Asslessman's blogs, we are building up our Warbands in preparation for our day of fun. 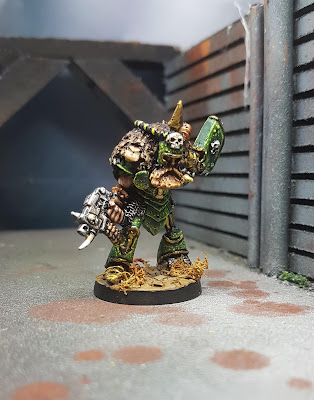 And so I Rolled up my Renegade.
He's an ex Rogue Trader so gets all kinds of goodies from the Rogue Trader lists in the RT rulebook.
He's a Psyker so gets to have cool psychic powers with which to blast his opponents.
He's a Mechanoid so is part machine.
He's got a cloud of flies.
He suffers from Frenzy.
He suffers from Temporal Instability so could disappear from the board for periods of time. 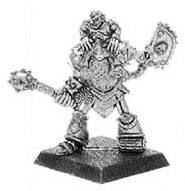 I found one of the above models on ebay. He was damaged already, so I felt less guilty about converting him. I cut off the Manakin as I'd never really liked it and cut off his non face as well. 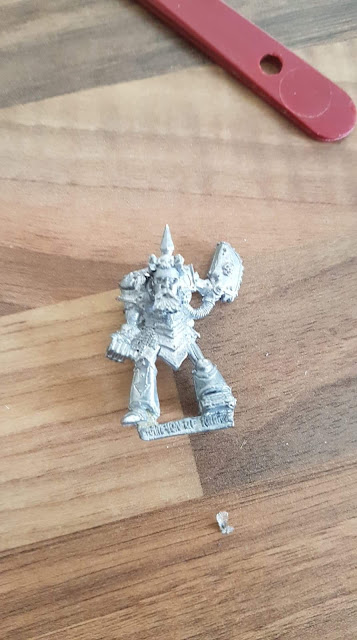 Next up was finding him a suitable head and after digging about in boxes I chopped the head off Ludwig Schwartzhelm and attached him to the front of the body giving him a hunched look. 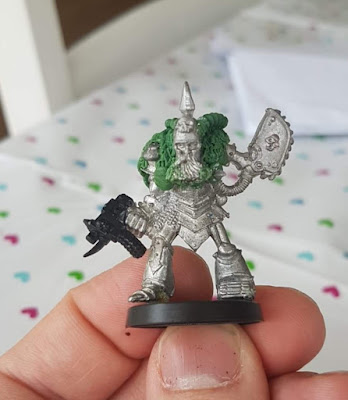 Next up I got the greenstuff out and covered the shoulders and hunch in a shaggy main of fur,  reckon this will be the nesting place for the flies that perpetuallly swarm round him. I trimmed the wreath from his helmet and built his beard as well. He then needed the Roundels rebuilt next to his face. The last thing to do was some cabling and pipes running from his head to a piece of equipement on his back. One of his shoulders had a little pouch attached and I decided to leave it in place rather than cut it off. 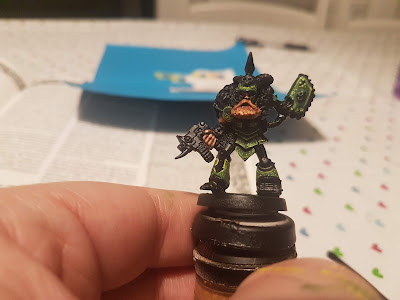 I actually read John Blanches painting advice in the RoC book and went for a green colour scheme which is remarkably common on the painted examples of figures round about that period. Inspired by some of the other figures I decided to use dots to highight and break up some of the flat areas and at a different effect to the armour. 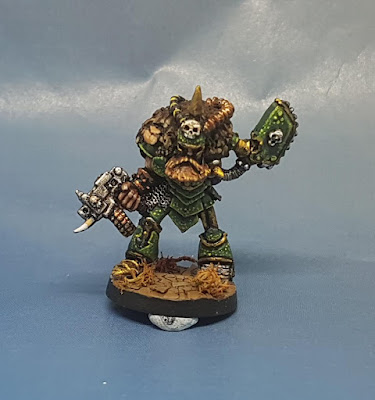 Now I need to look at the rest of his Warband. I rolled up 9 Beastmen, 8 Orks, 8 Squats and a Psyker. Wish me luck!
Realm of Chaos RT Warbands