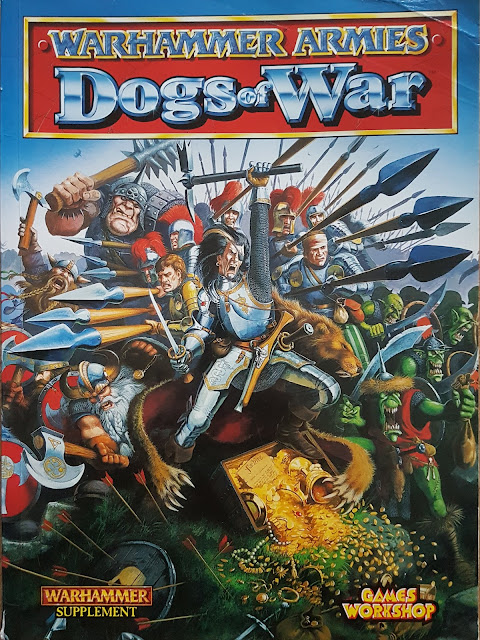 First up, a bit of context. Tilea is the Old worlds analogue of Italy and as such it has taken the political situation in the real world and translated it fairly accurately. Tilea is made of a group of city states that are governed by a Princely Dictator or as Republic of some kind. Even the map bears some resemblance to the real world. Think of the outline of Italy, turn it upside down and replace the land with water and vice-versa. Now look at the map of Tilea. I know, right? 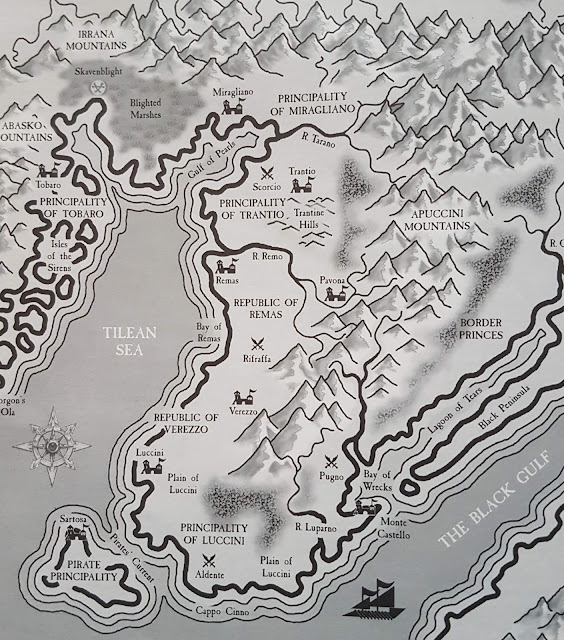 As far as I can see, Tilea wasn't mentioned by name until WFRP in 1986. The world section describes the collection of city states and names a few of them as well as giving details of their relationships with the Empire and Bretonnia. A shorter section in WFB3 repeats some of the information and Warhammer Armies mentions that Empire armies often employ Tilean mercenaries and then goes on to offer Condottieri (knights) and Crossbowmen and as mercenary contingents (alongside Estalians by the way).

Round about the same time the F2 fighter range includes a figure called 'Tilean Crossbowman'. So we can be fairly confident that Tilea was being fleshed out during the development of the two big GW games. Things pretty much stayed that way for some time however. Tilea was left as an interesting idea with a small amount of fluff giving players the option for a bit of southern colour in their games.

This all changed with the release of the Dogs of War army book in 1998. This army book is pretty much unique in the pantheon of Warhammer Army books. Not only do you get a guide to a Human land that isn't the Empire or Bretonnia, which is, in itself, unheard of, but you also get an approach to army building that is completely new to Warhammer. Lets tackle these one at a time.

Tilea is the Warhammer world fantasy Italy. As such the writers (Nigel Stillman and friends) have taken the story of medieval and renaissance Italy and spun it up to 90 for shear shits and giggles. For those of you that avoid history books like the plague. Italy was a mish mash of independent states of a wide variety of sizes and political constructions. All had their own character and all had their own ruling families or competing factions. 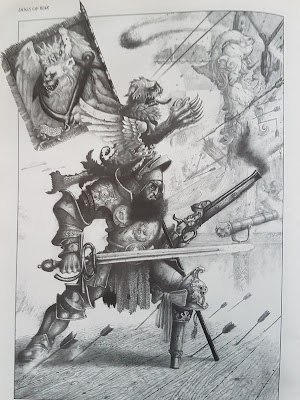 Warhammer Armies Dogs of War goes into detail about how the lands of the Merchant Princes came into being and details about how each of the major cities govern themselves. While sticking to the outline a lot of the info is played for laughs. It is one of the most humorous books GW ever produced. From the guide to statecraft based on the writings of Machiavelli to the tale of Piggolo I of Tobaro. As a piece of fluff describing part of the Warhammer world it is up there with Something Rotten in Kislev's treatment of....erm....Kislev for rounding out the world outside the Empire. Further sections in the book cover the Tilean cities relationships with the Norse, Araby, the expeditions to Lustria and even the trade routes to Cathay and beyond.

All of these city states were well off but they were not feudal overlords like their northern european neighbours so raising and army was somewhat of problematic issue. Initially cities relied on militias raised within the cities. These were meant for defence and were part time. This meant that the militiamen weren't keen on serving away from home. The Nobles, the ones that could afford armour and horses, tended to not want to risk their lives charging about on battlefield and would rather pay for someone else to do it. This led to the situation where city states tended to hire mercenaries to fight their battles for them. The city would offer a contract (condotta hence Condottiere) to a Mercenary captain who would supply a fixed number of men (be they Horse or Foot) for a fixed period of time. These would then prosecute the states wars on their behalf. This was an extremely lucrative business for a savvy military man. Foreigners made their fortune (Sir John Hawkwood, an english Adventurer who's portrait hangs in the Duomo in Florence) and sometimes Condottieri became more powerful that the state and took over (Sforza, who by sleight of marriage ousted the Visconti and made himself Duke of Milan). The stories of the exploits of individual Condottiere are fabulously viscous and lurid, Sigismondo Malatesta was accused of poisoning two of his wives for instance, and the personal rivalries were as long standing as the ones between states. An oddity of Italian warfare of the period was that, because the Condottieri's fortune and livelihood were sunk into the men he commanded, their armour and their horses, it made little sense for them to be thrown away in bloody battles. This meant that warfare became a complex game of manoeuvre, always looking to find a better position and force your opponent into a retreat, a skill that the rest of Europe learned later. Before that happened France invaded Italy and brought Northern Brutality to Italy for the next 60 years. Following this, the majority of Italy was ruled by foreigners for centuries. 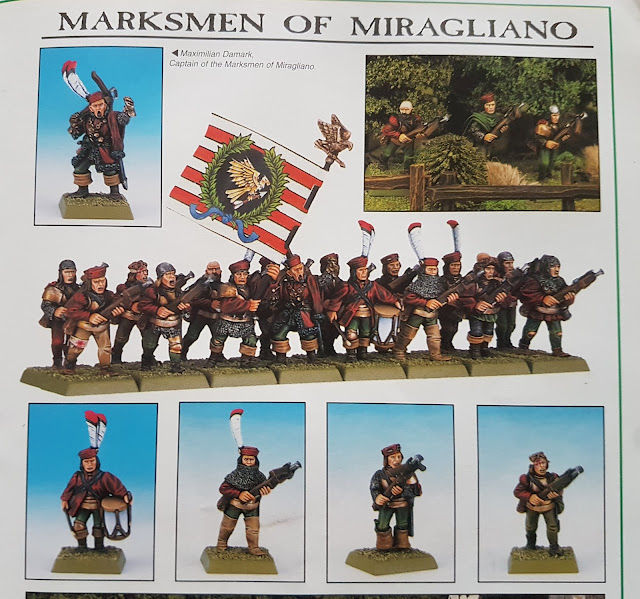 What the writers of the Dogs of War have done is taken this idea of the mercenary army and used to create a unique and lively background for the forces of Tilea. Rather than base the armies on a specific city state they have supplied the player with a range of Mercenary forces that are available for hire. Each of these units are led by a character (for whom the unit is generally named) and they are all completely unique. This means that you are employing a complete unit with special rules and named characters straight off the page, as if they had turned up at the city gate and offered their services.

These units can be hired individually by generals form any where in the old world (there are some limitations based on racial preferences and fun back stories) so they can be used to give your Warhammer army a bit of colour, giving some much needed variety into an army you already own. But a far more interesting prospect is creating and entire army from these regiments of renown! The book contains Characters that you can choose from to act as generals to your army as well wizards and hero's. There is even a unique variation on the army standard. No mere flag will do for a mercenary army. Instead the pay chest is brought onto the field so that all the soldiery can see that, if they fight well and win, they are bound to get paid! 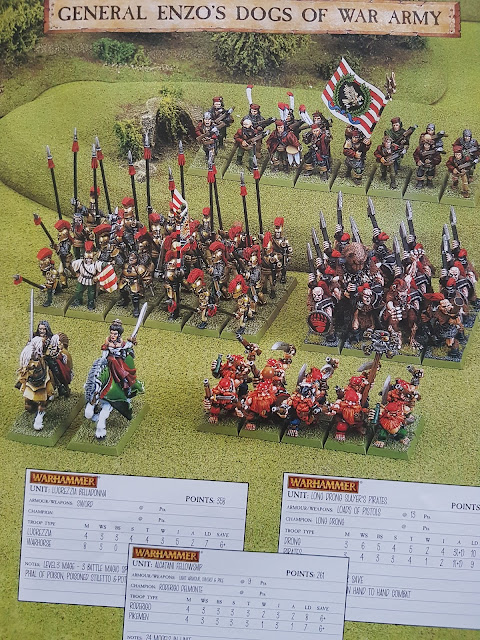 The book contains 15 different regiments that you can choose from to build your army. 4 of these are pike armed infantry of various sorts but the others vary wildy from Drunken Dwarf Slayer Pirates to flying crossbowmen, from an Elf Prince on a Dragon to a Bunch of Norsemen led by a Werebear. The styles of the units vary from sticking to the Tilea theme (a bunch of knife wielding assassins or a company of crossbowmen) to traditionally warhammer themed mercs (Golgfags Ogres enjoying their third manifestation). All these units were represented by gorgeous figures sculpted by the Perry brothers, can you imagine any other army getting 15 brand new metal units plus character figures all in one shot? Each of the Regments gets their own double page full of fluff with stats for their hero's and troopers.

Over the next couple of years more units were introduced to the range, Lumpin Crooks Fighting Cocks, The Giants of Albion, Oglah Khan's Wolfboys, Ruggluds Armoured Orcs, Tichi-Huichi's Raiders, The Cursed Company, Mengil Manhides Manflayers to name most of them. This gives 22+ units to build your army from.

Although an update was given for the units for 6th Edition Warhammer, the glory of the book was never repeated and by the time 7th edition came around it was all but forgotten. But for that brief moment during 5th Edition, the glory of what warhammer was shone as bright as it had done in the Glory days of 2nd and 3rd edition. The ancient idea of Regiments of Renown, companies with as much character as a single hero, known throughout the world, marching onto the tabletop, was revived and revelled in. Names that hadn't been heard in decades appeared once more to share their experience of war with other wandering mercenaries. I vital link to glory days of Warhammer was made. It was fun and it was funny. I wish I hadn't sold all my figures.....