Getting ready for Lardy Day 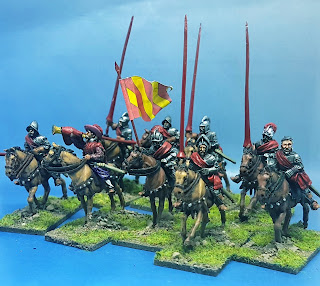 Just a quick post to show off a couple of units that i've finished off this week. After the run through of the game the other month the guys that played suggested that the Spanish could do with cavalry that was more aggressive rather than the Harquebusiers. So to solve this problem i've painted up a unit of Spanish Lancers. These are the new Warlord Games Gendarmes from their wars of religion range and they are perfect for the kind of armoured cavalry that the Spanish used extensively throughout the period. 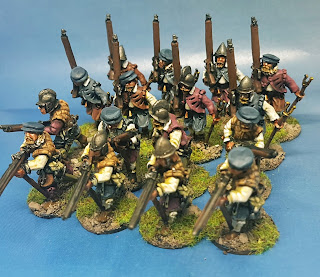 I also decided to paint a couple of groups of Musketeers for the Dutch. This means that they'll have enough formed shot for each of their pike blocks (if they so wish) and a unit of loose shot in addition. 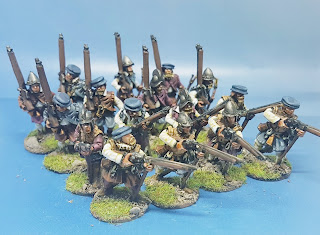 I'm pretty much ready for the game, I just needs to do a bit fiddling with Levels of various leaders to make sure that the two sides are balanced. The Dutch will have a serious numerical superiority but the Spanish have much better quality troops.

I'll be running the game twice on Saturday so I hope that everybody who gets a game will have fun. Fingers crossed.
Dutch Revolt Sharply Buffed