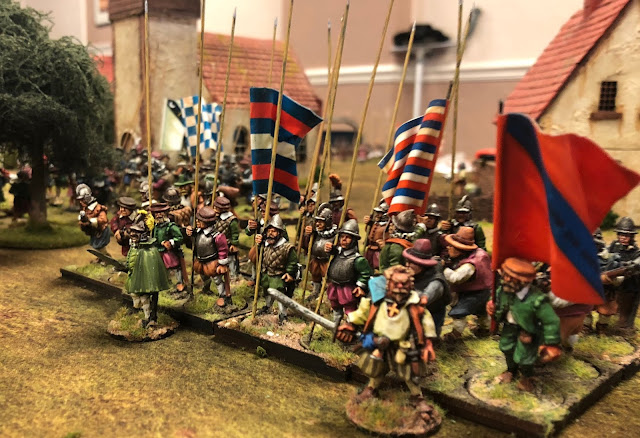 On Saturday 9th of April the Devon War-games group held their inaugural Lardy day, an invitational day of gaming where members and guests put on a hall full of games using rules written and published by TooFatLardies. 40 odd gamers packed the room to play a wide variety of games and you can see the overview of the day HERE. I was lucky enough to put on a game using my Dutch Revolt figures and terrain and I thought I'd show of some pics of the day. 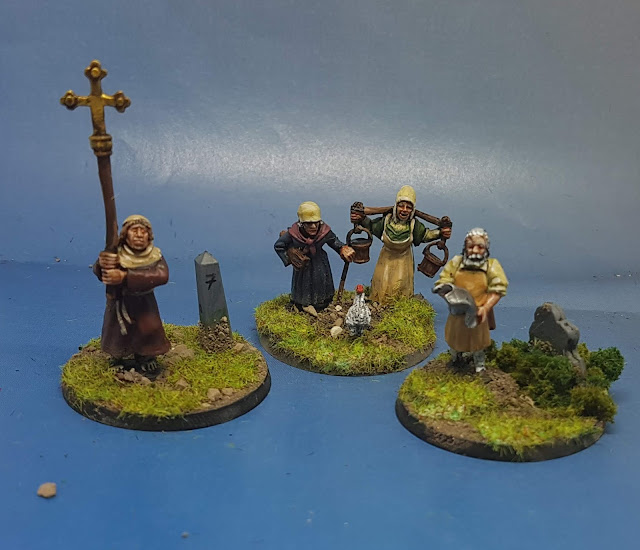 First up, the night before the game I decided I needed some deployment points so I painted up the above vignettes. One for the Spanish and two for the Dutch. I'm sure you can figure out which is which. 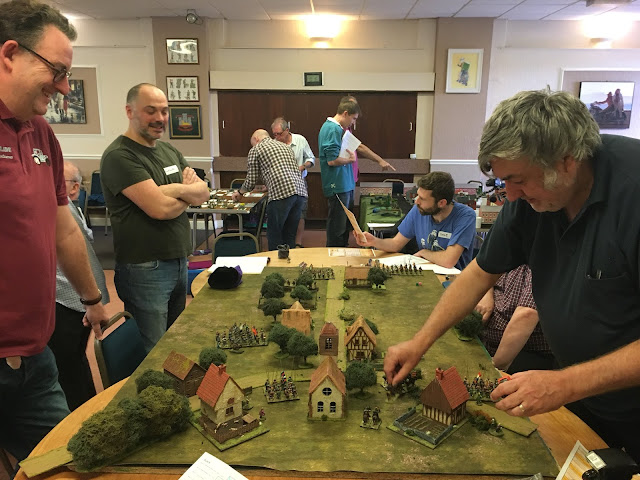 The plan was to play the game twice during the day, once in the morning and once in the afternoon. Each game would be played by 4 players, two each side with me trying to explain the rules and picking chips out of my purple sack. Amongst the players in the Morning were Matt Slade who is a regular at the Evehsam Lardy day, OML, ably organised by Ade Deacon. 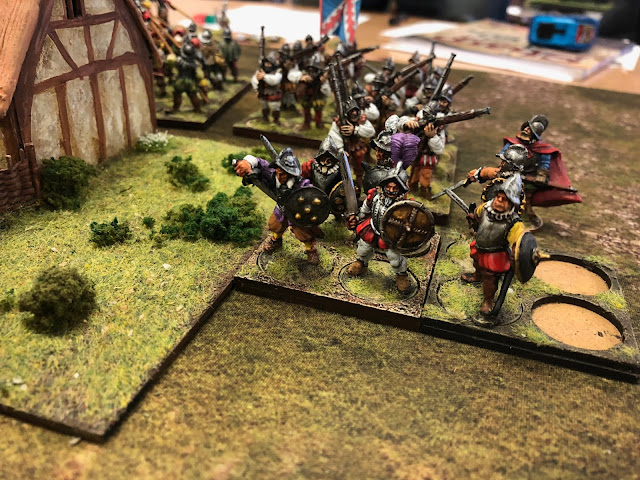 And in the Afternoon I was blessed by the presence of Richard Clarke of the Lardies. I'm pleased as punch to report that everybody had great fun playing the games and I was relieved to find that despite making some mistakes we managed to play the games through in time. 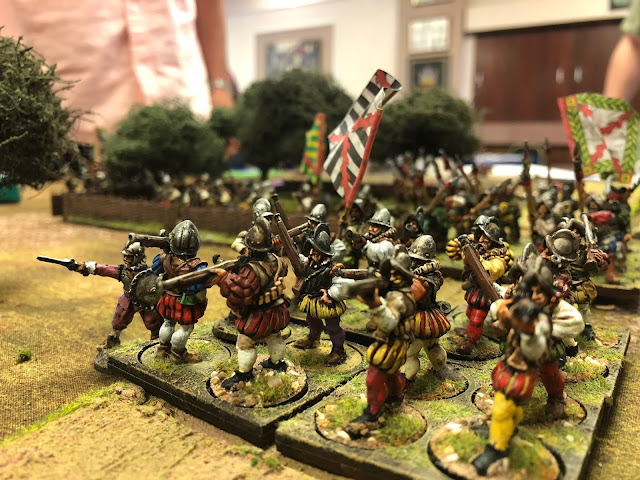 In the morning game the Spanish Loose shot dominated from the Orchard in the middle of the field. 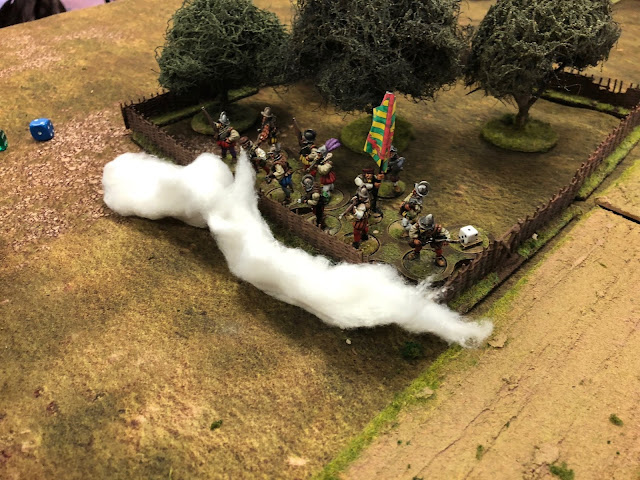 The Dutch Halberdiers broke off from the nearest formation and attempted to clear them out. The shot ran off at first but soon turned and loosed off a faceful of lead into the poor halberdiers. They pulled back but were pursued by the Spanish Veterans and after another round of shooting the Halberdiers fled, bringing the Dutch morale down with them. 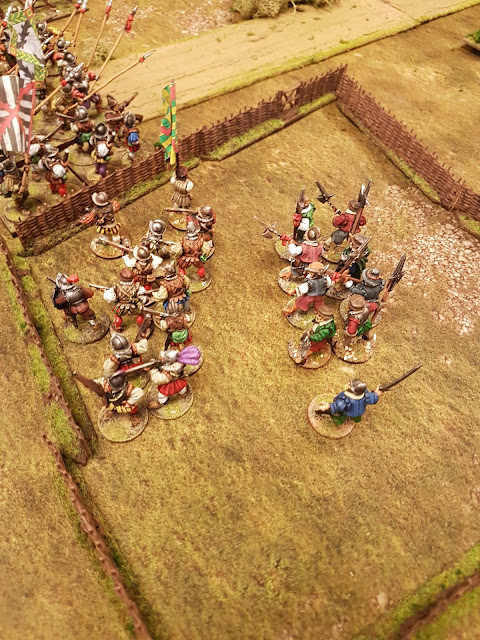 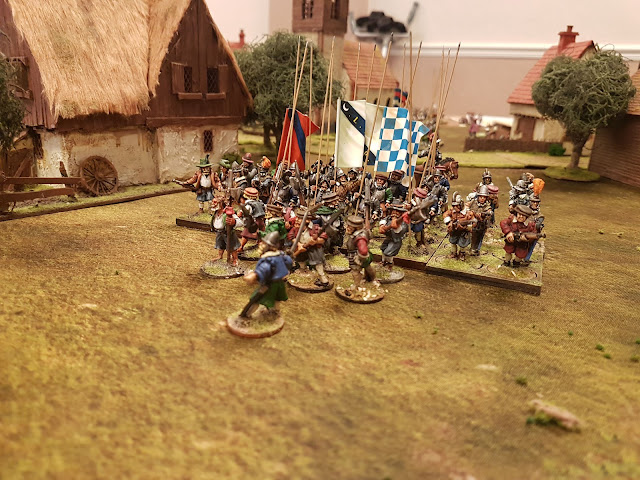 Despite taking a fair amount of damage the pike made it through and in combination with a second Dutch pike block managed to push the Spanish down the road. This left the Dutch Arquebusiers  without any Pike support however, and just as the Spanish Lancers found their way round the far side of the Orchard and lined themselves up for a charge. The German Mercenary Reiters moved to try and support the hapless Arquebusiers but were only quick enough to see the unit destroyed shortly before the Spanish Cavalry came bowling into them. The Dutch lost the following combat and the Dutch Morale fell to zero ending the game with only 5 minutes left before lunch. 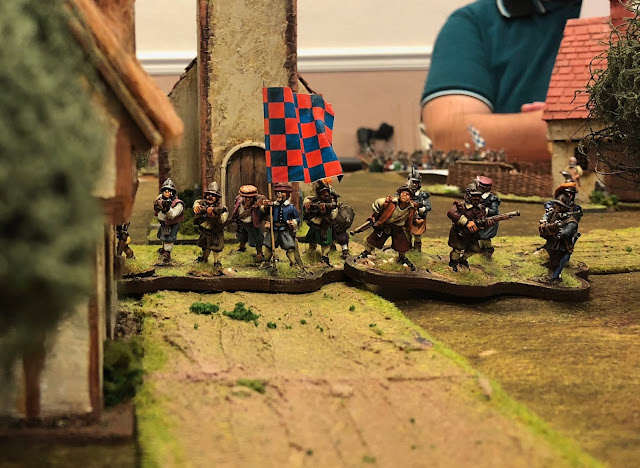 In the Afternoons game the Dutch were far more circumspect about their deployment only putting out skirmishers and the cannon initially. This left the Spanish in a bit of confusion (especially after their commander was knocked to the ground by his over enthusiastic troops). 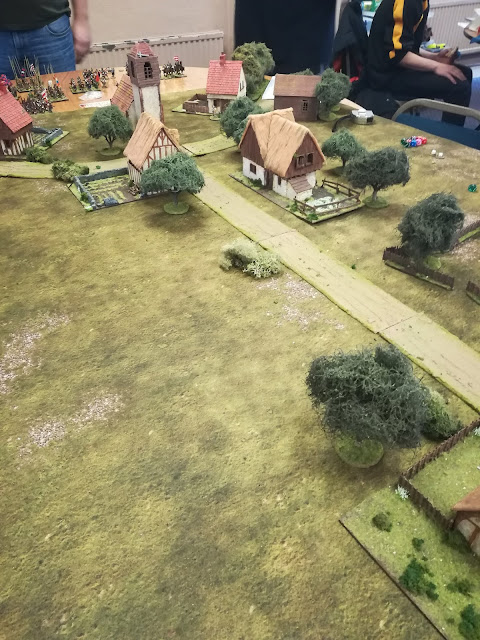 The Spanish milled around the small cottage near their deployment point and made little headway while being whittled down by shots from the cannon. 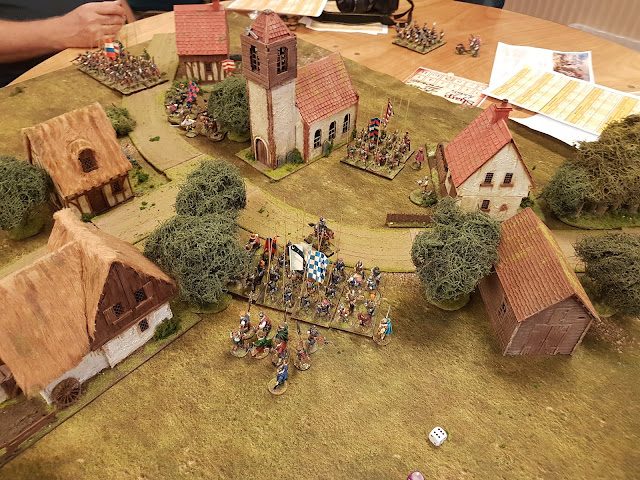 Eventually the Spanish Organised themselves and started to push up towards the town and the Dutch started to deploy in strength. The Dutch Loose shot punished the advancing Spanish but were themselves subject to huge amounts of return fire eventually requiring them to withdraw due to large amounts of shock. Once again the Spanish skirmishers made it to the Orchard but were crippled by the injury of their commander, this meant that the Spanish commander had to move forward to take charge leaving the Spanish Priest in charge. 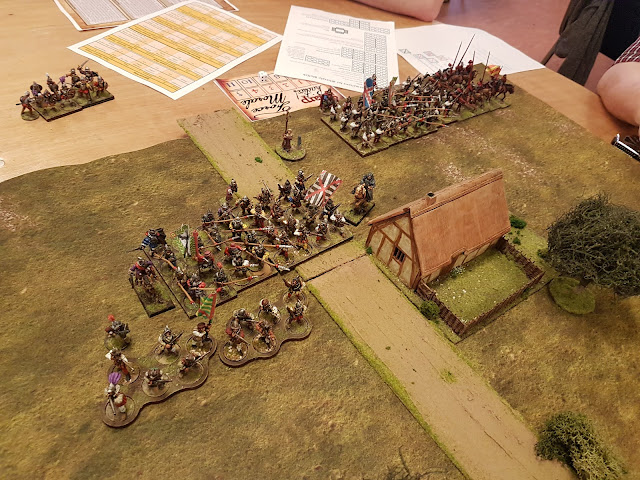 The Dutch commander moved to rally the skirmishers hoping to bring them back into the fight while his subordinate moved one of the Dutch formations into the junction in front of the Church in order to block the Spanish route to their objective. 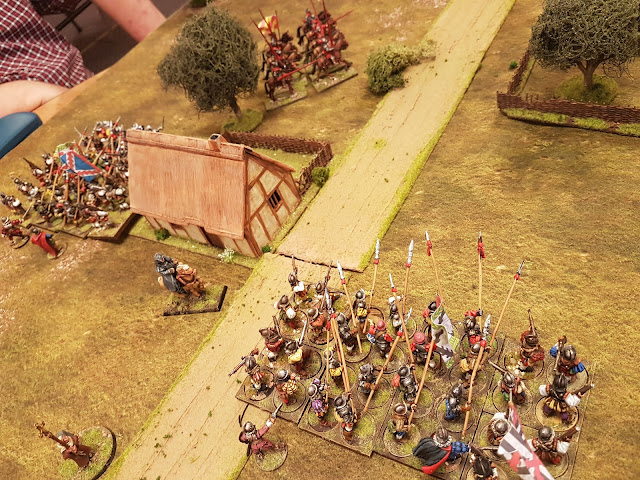 With time running out and our thoughts full of beer and curry we decided the there was little chance of the Spanish reaching the church so we called it a day.

I learned a few things playing the games that I'd want to put into practice (use of cavalry and limiting the power of skirmishers to name but two) in future games but when all is said and done, it was great to see people playing with my Figures and scenery and having great fun doing so. Thanks to everybody for playing, I hope we get another chance to do so in the future. Cheers. ( oh thanks to Matt, JJ and Rich who managed to remember to take photos when I forgot!)