August 19, 2018
Realm of Chaos - Slaves to Darkness had been promised to fans of Warhammer for almost as long as Warhammer existed. However, after years of development, it finally appeared in October '88 and almost instantly GW started teasing the follow up, Lost and the Damned. 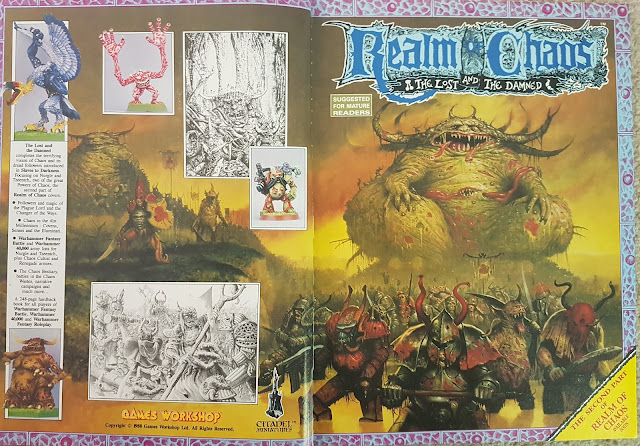 Promising in the Mail order pages of White Dwarf that it would be available to buy that winter. Now we all know that turned out to be wishful thinking and that Lost and the Damned wouldn't appear for another 2 years but that didn't stop GW from trying to get us all excited about new book and teasing us with the kinds of things we could expect from the follow up. 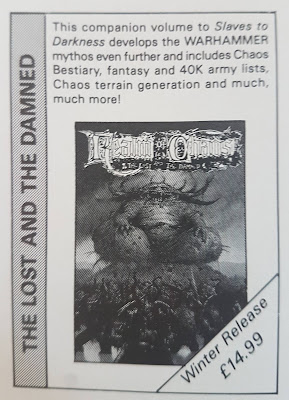 In fact they published loads of teaser articles in White Dwarf, everything from an Iluminations article showing us samples of artwork that would be seeing (the majority of which didn't actually appear in LatD) to full articles ( that were rewritten and published in completely different formats when they finally appeared in the book) as well as rules for things like the Palanquin of Nurgle. One of the most interesting things to appear in White Dwarf as a teaser appeared very early on in White Dwarf 107. It was close to the release of Slaves to Darkness that the corrections and errata were published in the same issue. 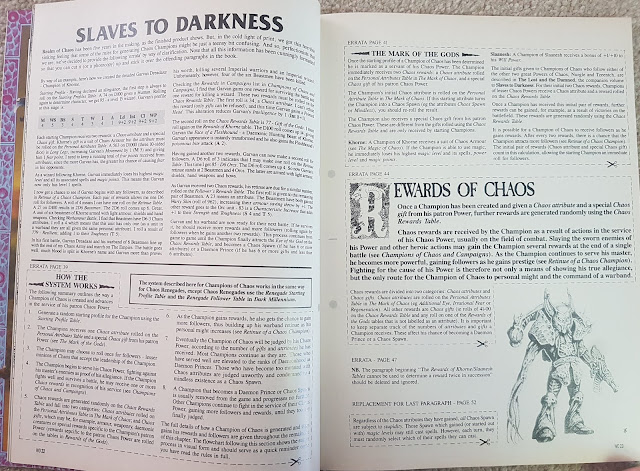 So what is this interesting thing? I hear you sigh. Well, in WD 107 GW published a full army list for  Chaos Renegades. That's right, a Rogue Trader army list for the kind of Renegades that you'd been rolling up on all those crazy random lists in Slaves to Darkness. And now you could use them against your buddies Space Marines and show them whats what. 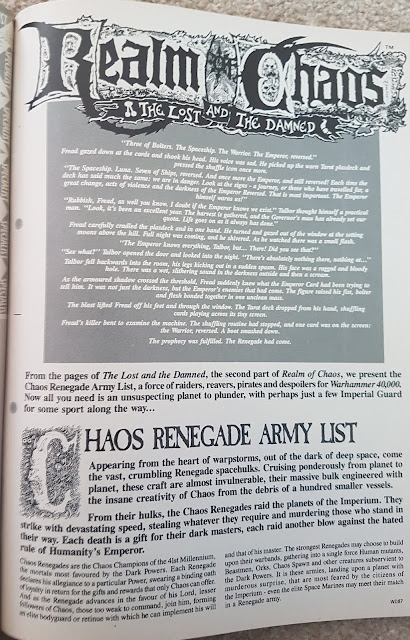 First of all were the Warbands.

Essentially what you could do is use up to 4 Chaos Renegade Warbands as the basis of the whole army. One of your Renegades had to be designated as your Warlord and the others were subordinate renegades. Each warband could be treated as a single unit or split into smaller units for their roles in the battlefield. The lovely thing here is the points cost only covered the 'roll' on the followers table an it was the same no matter the result. I bet that could really piss people off.

The next part of the army list consisted Daemons, both the Summoned and the Possessing type. Now these guys were expensive but who doesn't want a big ass Daemon Prince wandering around stomping on their enemies. 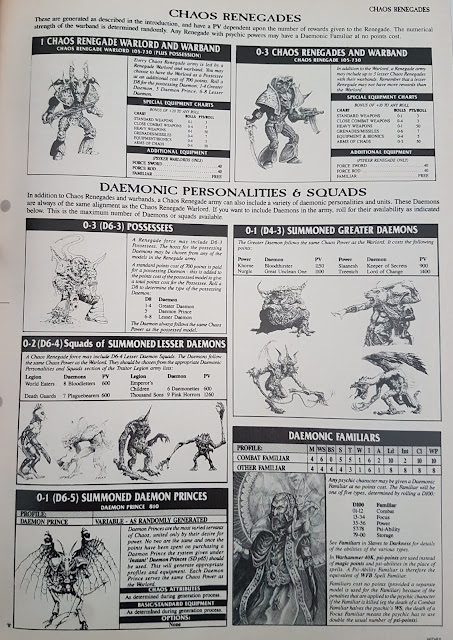 In addition to the big bad Chaos types you could add a variety of troops to beef up the numbers of your army.

Every chaos Warlord wants nice spiky unit of Chaos Marines and low and behold your first option is just such a unit. Obviously, this being Realms of Chaos, you have to roll on a chart to see what you get but what do you expect form the fickle gods of the warp?

Next up are some Psykers for all your extra phase needs.

Small, 5 man squads of humans are next. The interesting thing here is that the squad leader gets a grenade launcher as standard making them pretty useful little annoyances for your opponents.

Similarly you have acces to 5 man squads of Orks as well. Again the Heavy Bolter that comes with the squad adds a bit of ranged firepower to your force. 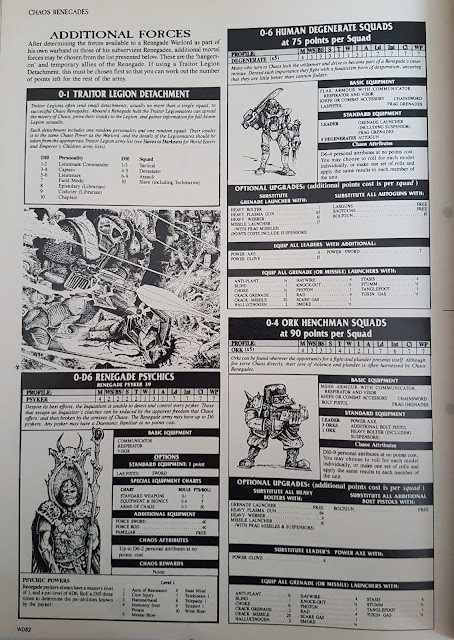 On the next page we find that we can buy ourselves some beastmen squads. Armed with chainswords, swords and laspistols, this lot will make a mess of somebodies breakfast and backed up by some...

Ogryns (who unfortunately don't have access to ripper guns) this could make quite an effective close combat/assault wing that could be used to avoid wasting your expensive troops early in the battle.

The last two entries give us some throw away troops to soak up the enemy bullets. First of some units of Grots, keen to show the chaos gods their true worth and secondly, Slave Troops. This last entry is pretty questionable, captured humans sent into battle in big mobs with only hand weapons and an explosive collar that could be detonated should their morale suffer, or even if the Warlord can't be doing with them anymore. 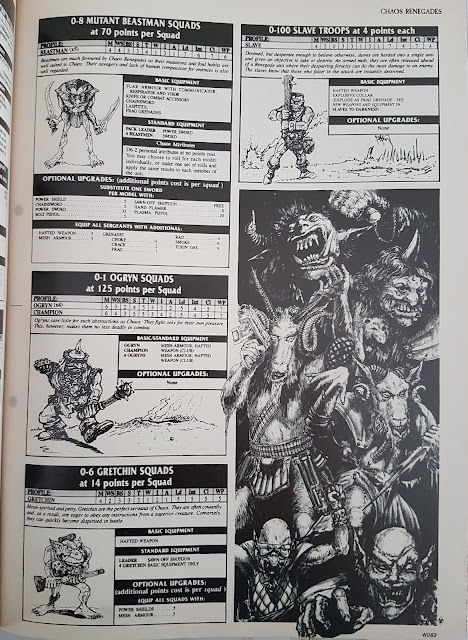 So there you have it. A eclectic list that allows you to use the Warband that you have created with Slaves to Darkness and build it up to a full army with the kinds of figures that you might have sitting about already. It has enough scope to allow you to build up pretty much any combination of troops you fancy and could keep you entertained for months.

This list never made it to Lost and the Damned and as you can see, it is laid out in the same style as the early RT lists rather than the format that were eventually used in Lost and the Damned. There were lists for Tzeentch and Nurgle renegades armies but never one that covered all denominations.
Why LatD took so long to actually get published and why it's contents and lay out were so different from StD is probably a long and no doubt boring story, but the peeks into it's development that were teased in the White Dwarf of the Era are fascinating.
Chaos army Oldhammer