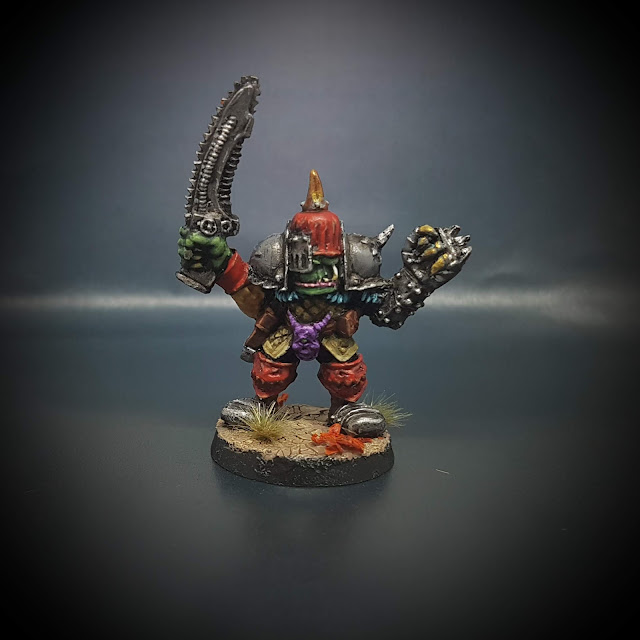 My latest mild obsession is Chaos Renegades of a variety of flavours. The main reason for this is the rediscovery of the Chaos Renegade army list that didn't make it into Lost and the Damned (more of which in the next post). So to scratch the itch I dug out my Rogue Trader Ork Renegade model and grabbed enough time when I wasn't being annoyed by rugrats or given Jobs to do by the wife and got him painted.

The original model is a bit gummy as Kev Adams decided that he shouldn't have teeth which has always bothered me. So I gave him big fang and a couple of little teef and I'm much happier with him. 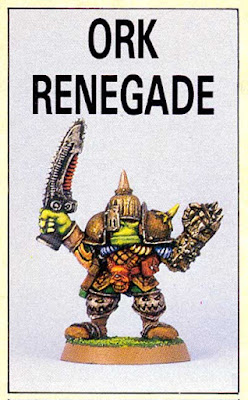 There were three Renegade models in total but its easy to assume that the other two are just normal power armoured Nobs and use them as such. I think I've got at least one of these to add to the warband so expect to see him joining up sometime soon. 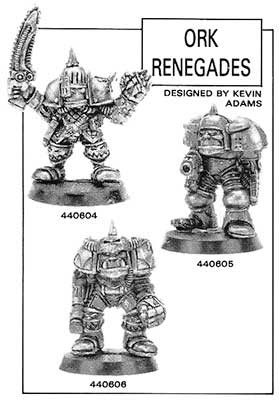 Talking of Warbands, If he is going to be a Renegade then we need to generate a Warband. What I want to to do is use this guy and his Warband as a regular Realm of Chaos warband and as a Freebooter Warband in my Ork army. That means that I'm going to have to be a bit careful about the retinue members that I pick for him. Yeah, you heard me. Pick. As much fun as randomly rolling warbands is, it's not the most practical way of using the figures that you own and will never in a month of sundays give me a Warband that will satisfy both warbands generation tables. 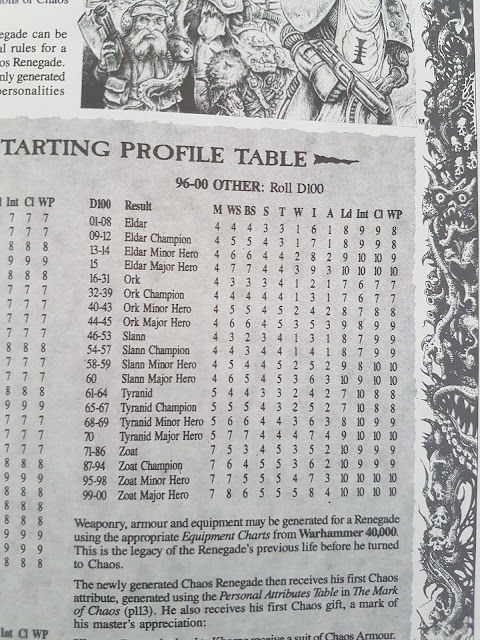 Thankfully the main renegade table gives the possibility of your Renegade being an Ork of a variety of stripes. The main Retinue table also has an entry for Orks (which is obviously one of the Freebooter entries) so a bunch of Orks are a given. What about our power armoured chum from the advert above? In the Freebooter list it's obviously straight forward but in the RoC it's a little more tricky. What we need to do is roll another Chaos renegade from the retinue list and then when we come to generate him we happen to roll him up as another Ork. Now obviously this is highly improbable but not impossible. So i'm going to take it. 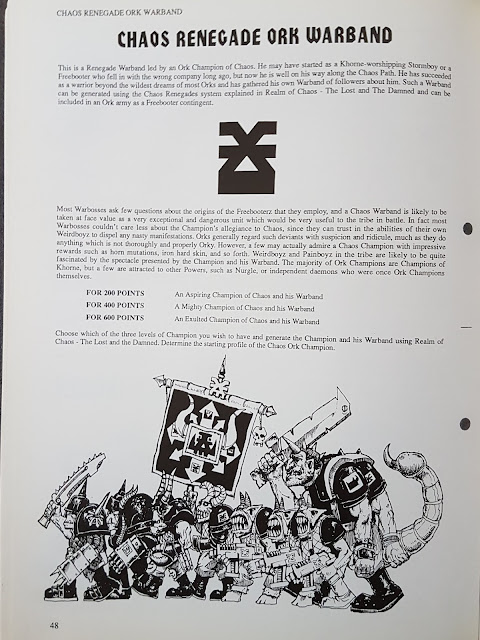 The final part of his retinue is going to be a basic roll on the RoC table and this is most likely going to be either Humans or Beastmen (as statistically these are the most common rolls on the Renegade followers table). We need to make sure this fits with the Freebooter list as well and luckily enough one of the one of the entries allows you to make a roll on the RoC table. Whoop whoop! Improbablity be damned!

So there you have it, a nice little Warband, a couple of characters, some weird Orks and some Humie's backing them up. I nice group of villains to use in small scale games, a freebooter mob to use in an Ork army and a constituent Warband to build into a Renegade army. About that Renegade army.....