All the nice Grognards luv a Zombie! 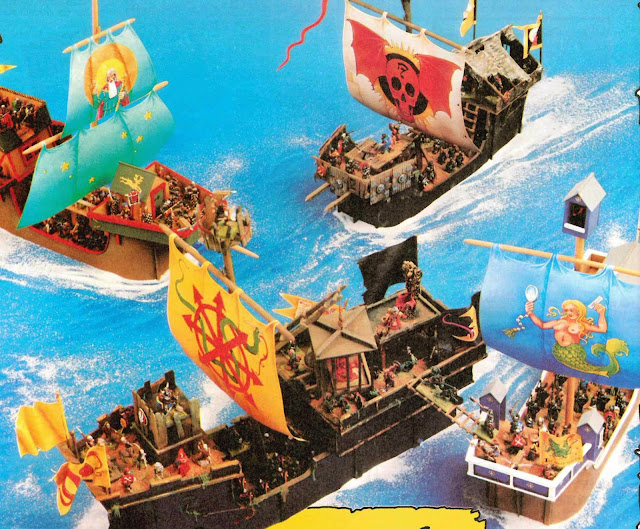 Being a bit of an old fart in training, my memory sometimes plays tricks on me. Things you swear you read in one place often turn up in completely different books saying something else than you remembered. I bought a book the other day and as I was sitting in my favourite reading spot (the toilet, it has a lock!) I realised that I'd already read it but had completely forgotten. So this little inconsistency took me down a fun little path the other day. Coming up with ideas for games to play next year at Boyl I suggested a Rogue Trader version of Legends of the High seas, which, if you're not familiar with it, is a Warhammer Historical pirate game. Based on the same engine as Lord of the Rings, LOTHS (and its sister game Legends of the Old West) gives a good game and were great little publications showing that it's such a shame Warhammer Historical was wrapped up several years ago.
This led on to a discussion about playing a straight Pirate game or a Fantasy pirate game or ...etc...etc...you know how these conversations go online. This led to me thinking about making ships and the best way to do it and trying to remember where I'd seen stuff in old white dwarfs and this is where the fun began. 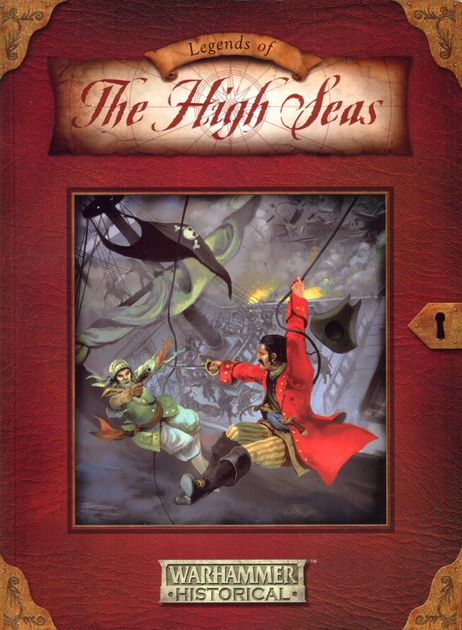 (Before we get into that I'd just like to assure you that I'm well aware that LOTHS has pretty decent rules for ships and ship-to-ship combat and that the article I was originally thinking of was actually published in the Generals Compendium for 6th edition and is a very detail set of rules for playing with boats but thats boring....on with the fun!)

After googling for a bit I found what I thought I was looking for. I knew the wonderful Gary Chalk had done an article for White Dwarf called 'All The Nice Dwarfs Luv a Sailor'. I was convinced this was the thing I was remembering (I blame a the ease at which you could download PDF's of stuff a decade or so ago, you don't get a time stamp for stuff, you just find it and use it!)

The article appeared in White Dwarf 82 and gives rules for sailing and fighting with Ships and includes basic instructions for building said vessels. 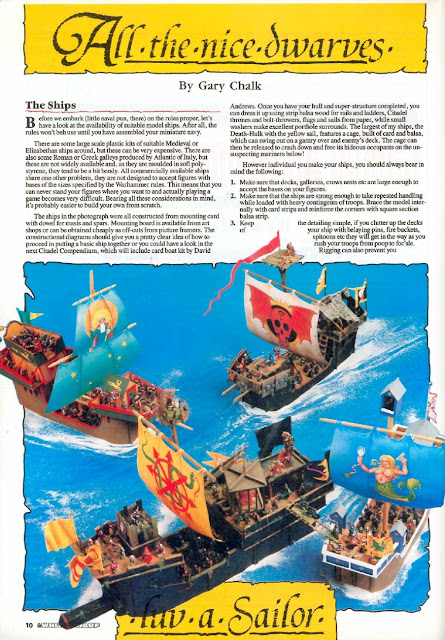 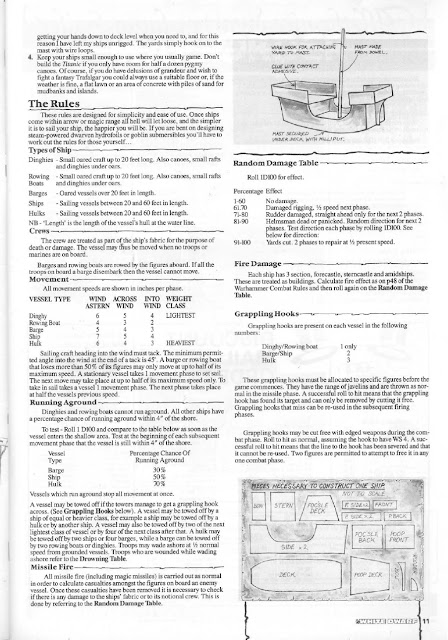 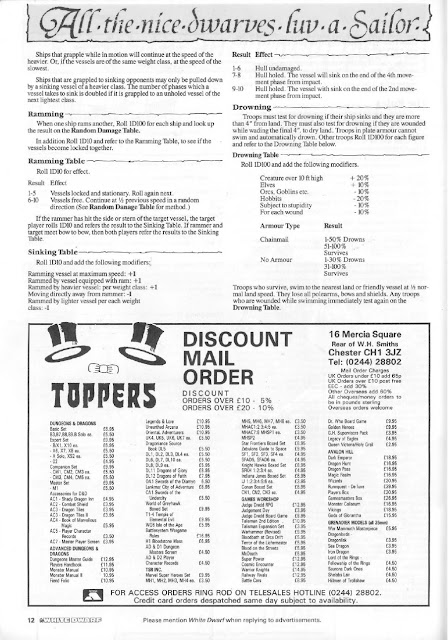 As you can see the rules are nice and simple an Gary's ships are gorgeous, I couldn't help feeling there was a bigger scale version of the ship plans that I'd used sometime in the past so I went back to the internet to search for them. Lo and Behold it seems that Mr. Chalk loves himself a bit of ship based fun as he'd also done some articles for Pirate Ships that were originally published on the War-games Foundry website (I think it was these articles that I'd originally used) and here are the links should you wish to peruse them.

This wasn't the end of my internet Odyssey however as I was convinced that there was another set of ship based warhammer rules and I continued to search for things like 'Warhammer Pirates' and thats when I stumbled on The Zombie Pirates of the Vampire Coast, an army list for 6th Edition that i'd almost forgotten existed, and you know how much of a sucker I am for all things Lustria. 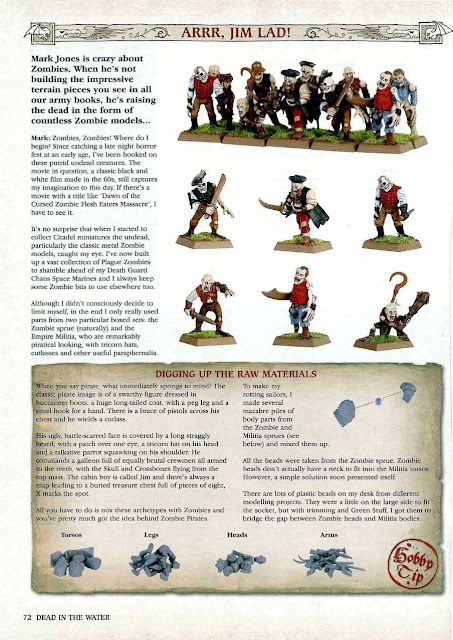 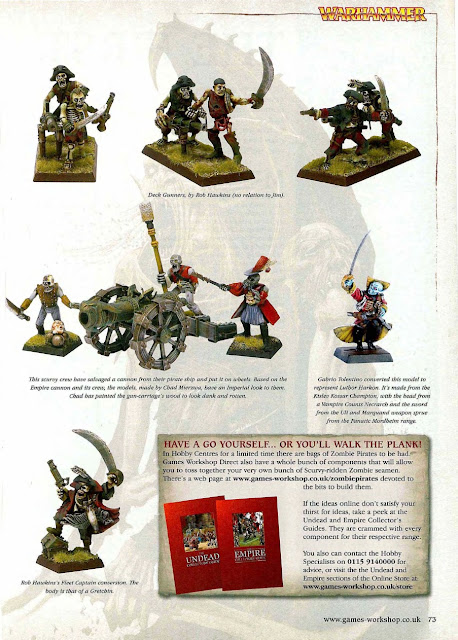 Basically the story is that a ship is attacked by a bunch or drunken Norseman on their way to Lustria. In amongst the booty is a sarcophagus with a very pissed off vampire inside. Once he's killed off all the Norseman and shipwrecked himself on the Lustrian coast, said Vampire goes a bit mad due to some magical stuff he tries (and fails) to pull off and so ends up raising himself a crew of Zombies and acting as a right pain in the backside to all the shipping heading in and out of Lustria. It's all very 'Pirates of the Caribbean meets Dracula and the Edge of the Known World' but in terms of Warhammer it all just kind of works. This really is a modellers army, none of the figures existed at the time (some figures, a Vampire and a Zombie captain eventually came out) but essentially all you had to work with was the Zombie set that we all know and love and the Empire Militia set (GW kindly packaged sprues from both in a handy bag for a couple of months to give you an opportunity to make up your scurvy crew). What you had in the end was a zombie army that had access to guns and cannons as well big nasty Zombies (undead Ogres etc) and the massive rotting corpse of whatever see monster you could think of (A Rotting Leviathan!). This army seems like the most ridiculous amount of fun and it was great to be reminded of the days when this kind of nonsense was perfectly acceptable in Warhammer circle.

What also impressed me was that despite being 10 years and 124 issues apart, these two articles from White Dwarf are still perfectly useable. Gary Chalks articles are completely rules and edition neutral and can be used with pretty much any game never mind which ever version of Warhammer you might be enamoured by. It's a simple thing to mount your Pirate Zombie's on a ship built to Gary's plans and use his rules to zip around the coast of Lustria causing chaos. In addition to this they are both great additions to Lustria in itself, adding to the possibilities and the cast of characters that the first great Warhammer setting still offers us.

I suppose it's a bit of a lesson in avoiding cutting off your nose just to spite your face. I could spend the rest of my life happily pretending nothing exists beyond 3rd Edition Warhammer but i'd be missing out on so much great stuff. Not the games themselves but more the additional material that was produced in order to make the game and the world it was set in, a more rounded and enjoyable experience. There is no need to re-write the rules or to reinvent the game, we have been freed from having to play the game 'the right way', we can make use of all the best bits that Warhammer has given us throughout the decades and we can use it all at once. I've just ordered myself a copy of the General's compendium for 6th edition and most of them are as easily useable for 1st edition as they are for Age of Sigmar. Thats the way we should think about it. It's all good.
Oldhammer Seahammer