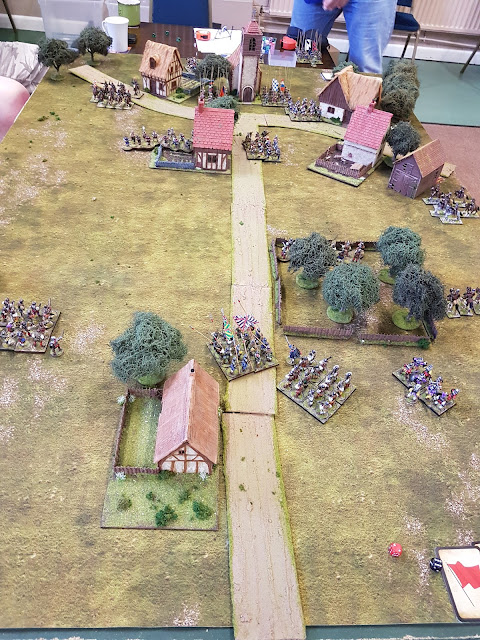 It was finally time to put all my toys on the table and run a game of Sharply buffed at my local club. As you may or may not know, I've been slowly painting up figure for playing games set during the early stages of the Dutch revolt. I've been slowly plugging away for about 3 years now, doing bits and pieces as and when I have time and motivation. I've flirted with a variety of rulesets but finally plumped for a variation of the TooFatLardies Sharp Practice. The rules adaptation was published in the Lardy summer special in 2017 and go by the name of Sharply Buffed and are specifically written by Nick Worthington to reflect the period of warfare that i'm interested in playing, the late 16th century. 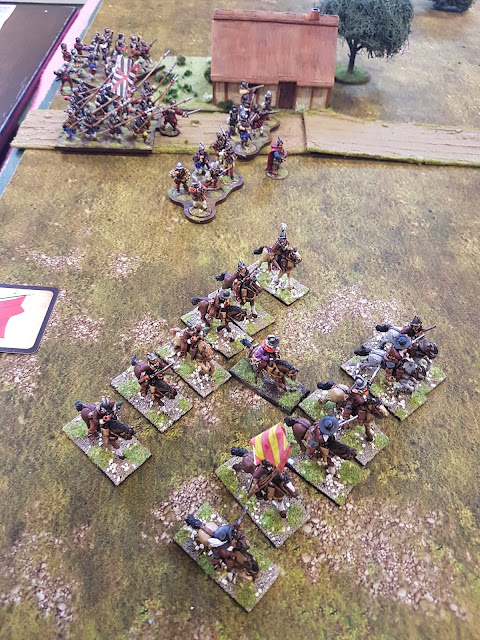 I've also been working on scenery for the game as well as new units so this is the first time that they were used in anger on the table. In fact 3 of the 5 block of pike and a load of the character models on the Spanish side have never seen a table top before. 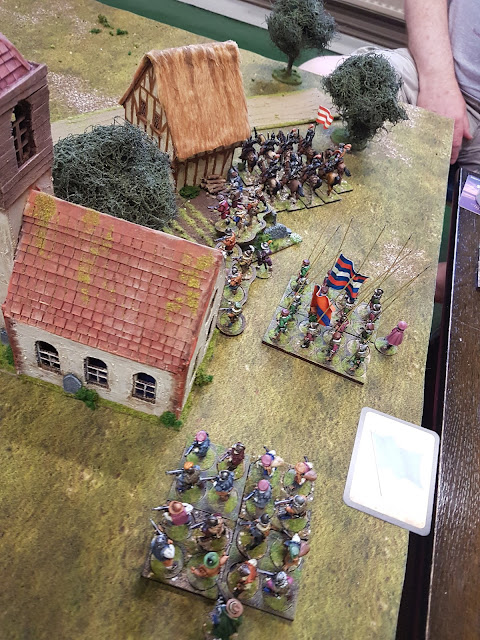 Determined to keep the Catholics out of their country was a large force of Dutch patriots consisting of 6 groups of Arquebusiers (3 units) and 6 groups of pike (3 units) as well as a group of halberdiers and a group of German mercenary Reiters. The Dutch players had the choice to deploy one of there shot units as skirmishers which is exactly what they did. 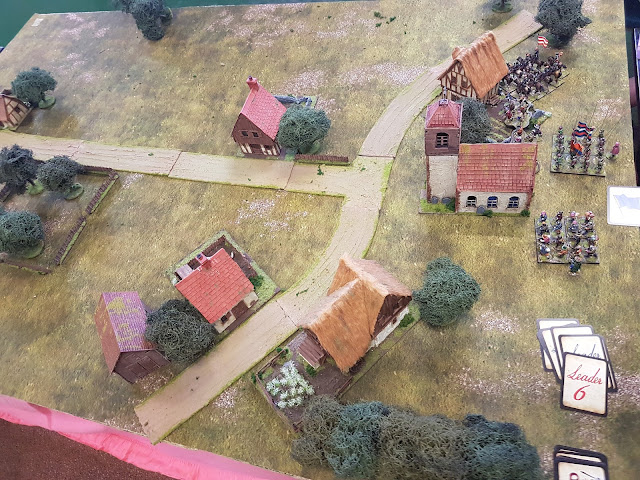 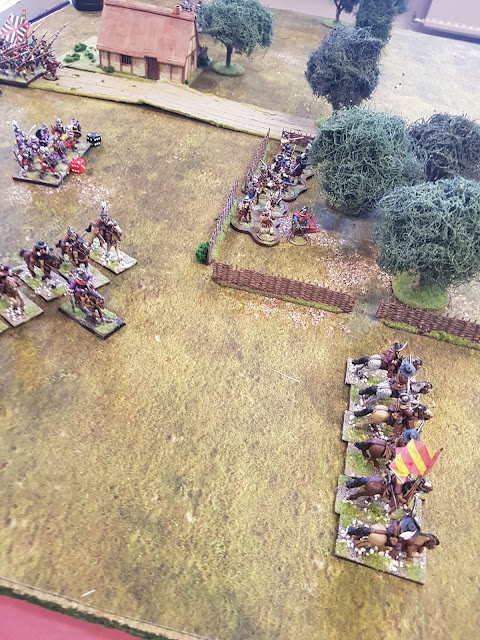 The game played really well in the end. The Dutch right flank played aggressively and pushed the loose shot as far forward as was sensible. The Reiters cantered onto the field and and moved steadily towards the Spanish. A block of pike followed them at a sensible pace and the Halberdiers wandered up behind wondering what all the fuss was about.

The Spanish right moved up rapidly with the loose shot heading for the orchard and the mounted shot looking to out flank the Dutch positions. 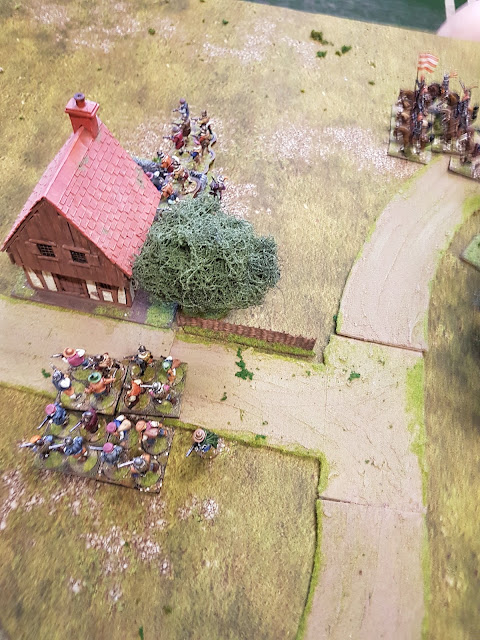 In the centre an Dutch unit of shot dithered as it was hit by fire coming from the Orchard and the sight of the cavalry menacing its's flank. The shot pulled back allowing the pike to come up and form a sleeved block. Despite taking a lot of fire and shock the formation stayed in position for the rest of the game blocking the main road and the way to the church. 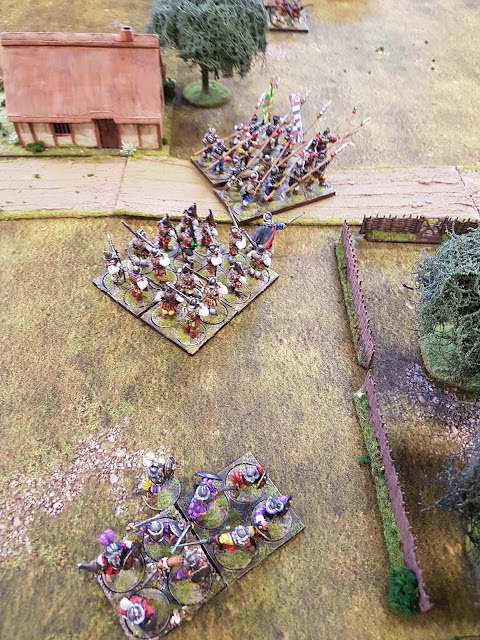 The Spanish centre saw the musketeers follow a pike block up the the road while the arquebusiers entered the fields and headed towards the position of the Dutch loose shot. Seeing the threat of the cavalry the pike headed off to support the shot leaving the musketeers to hold the road. The group of swordsmen headed off the the flank to support the mounted shot and hopefully get in the village that way. 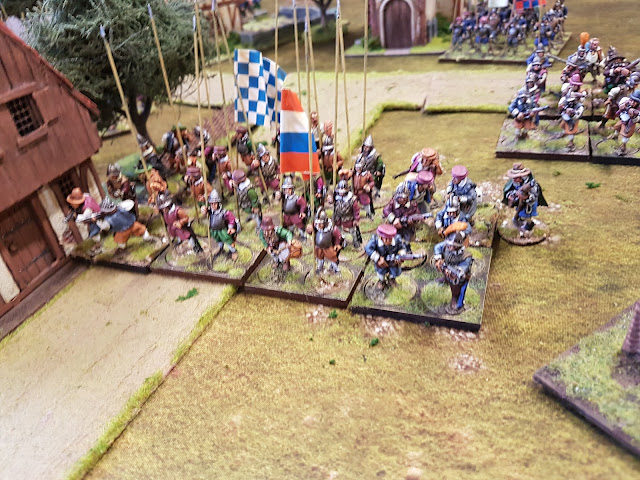 A second unit of pike and shot formed up in front of the church but were left fairly idle as they had no targets to shot at no room to manoeuvre. A lot of the Dutch troops were tied up in this area for the whole game. 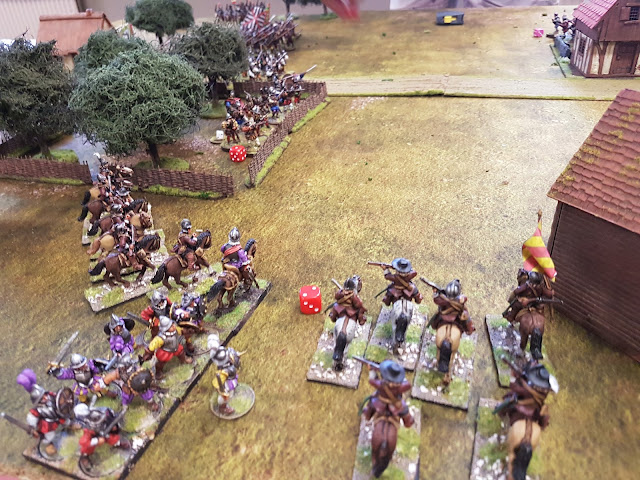 Meanwhile, fire from the Dutch loose shot had wounded the officers of both the Spanish Musketeers and the Spanish Arquebsuiers. This left both units stranded until their officers recovered or more senior officers came to sort the issue out which the Spanish commander duly did by combining the musketeers with his own unit of pike. The German reiters had worked there way round the flank of the pike unit and started to pour shots into them. They somehow got themselves carried away and charged into a full pike block. Silly fellows. After some desperate fighting the Germans were chased from the field. 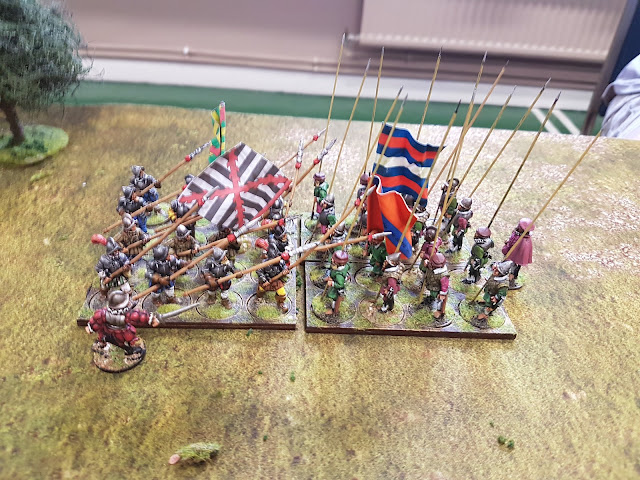 The jubilant Spanish Pike then turned to face the oncoming Dutch Pike who had been attempting to come to the aid of the Germans. 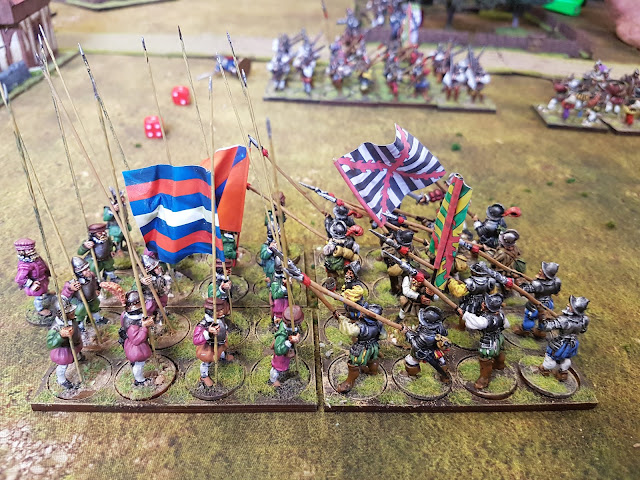 With a wary eye on the second Spanish block now heading across the field the Dutch smashed into the Spanish and gave them a complete spanking, the Spanish running from the field with the jeers of the Dutch ringing in their ears. Both armies had now lost units and officers and morale was dropping fast (note to self: Remember the morale trackers next time!).

With the Halberdiers trying to come up in support of the, now damaged, pike block. It was charged by the second Spanish Block, this time lead by the Spanish Commander. This time it was just too much and the Dutch buckled and fell back, dropping the morale of the army even more. The Halberdiers arrived just in time to face a victorious block of pike and shot wheeling to face them and they were savagely beaten in combat. The Dutch Morale crumbled to nothing and with the majority of the troops still milling about the church, they dropped their pikes and ran for it.

All in all we had a great game and I learned a few things. I'm going to drop the Spanish mounted shot in favour of a group of Lancers as they would seem a bit more fitting. I'll have to make sure that the Dutch player is aware that the Reiters are essentially just dragoons and would be better of shooting up their targets rather than charging in to a fresh formation. I'm going to add troops to the dutch side in the form of some more arquebusiers so that they can have a dedicated loose shot unit as well as shot for the three pike blocks and i'm also going to give the Dutch a small field gun and a boost to one or two of the levels of the big men in charge of units. I know this makes it appear as if the Dutch have far more figures than the Spanish but the quality of the Spanish troops more than makes up for their lack of numbers. And i'm going to try and figure out a neat way of helping the players remember which leader is which, when your not playing with your own figures it's easy to forget.

The game was a run through for the game I hope to put on at the Lardy day that the club is running in September. If you are interested in attending the information is below. 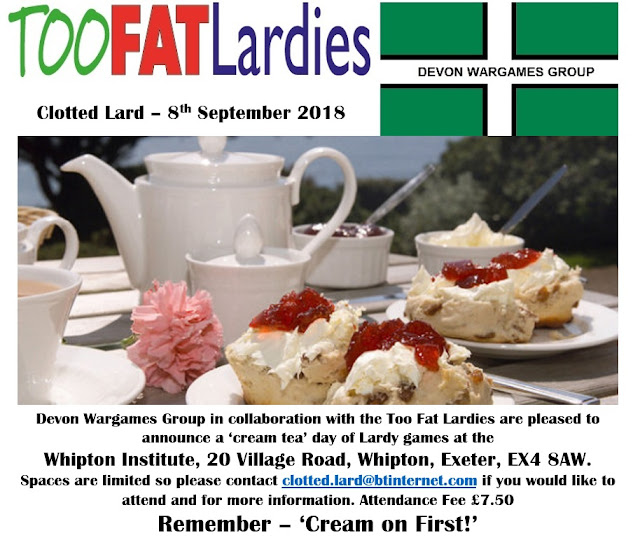