July 05, 2018
Between 1984 and 1990 citadel released over 160 figures in their 'Oriental Heroes' ranges (C Series C05, and OH1-5), a set of 20 Zombie Samurai (C18), an Oriental Dragon (C14), a rocket launcher and crew (C22), a Samurai on a Temple Dog and a smattering of other oriental themed minis (an Ogre that looks suspiciously like an Oni for instance). Now, for a company that didn't set it's game in the far east (or even in a fantasy land analogous with the far east) this is a hell of a lot of figures based around a single theme. Yes there was mention of Cathay and Nippon in the rules. Yes there was an army list in Ravening Hordes for 2nd edition and a mercenary list in Warhammer Armies for 3rd but there wasn't a lot of information about either of these nations and to be honest it was mostly focused on Nippon and very little about Cathay. 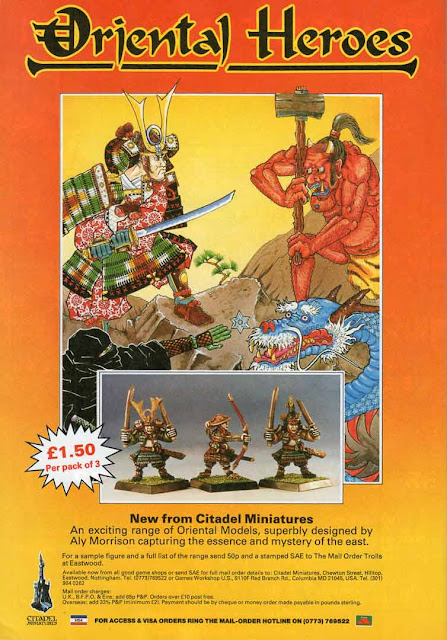 First question is why? Why make all these figures when you have little interest in pushing the background. Early on GW mentioned having a book detailing Lustria as a setting for adventure. Was Cathay and Nippon a secondary possibility for an adventuring setting? Possibly

There is a more pedestrian explanation though. 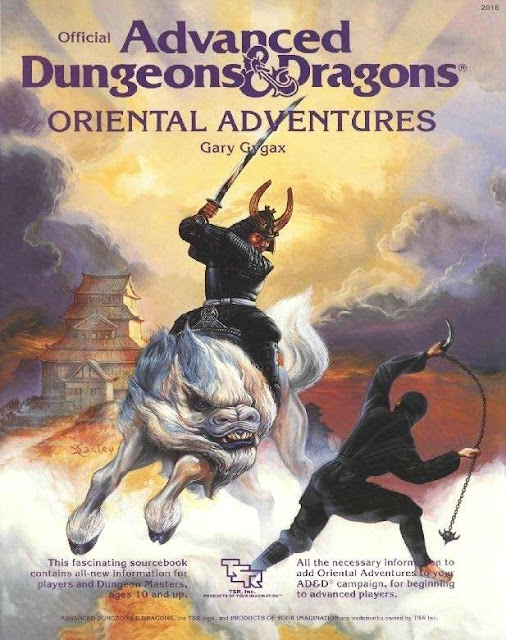 In 1985, TSR's biggest seller was this book, Oriental Adventures for Advanced Dungeons and Dragons. The book gave the players and the DM the opportunity to adventure in a non-western setting with brand new character classes, monsters, weapons, spells, abilities, unarmed combat and honour, clan and ancestor systems.

The book gained a 9/10 review in White Dwarf 74 and was described as a whole new version of AD&D rather than just an add on. 7 adventure modules were also published for the system with such evocative names as 'Swords of Daimyo', 'Blood of the Yakuza' and my personal favourite 'Mad Monkey vs The Dragon Claw'.

The module was set in the land or Kara-Tur which took it's influence from Chinese, Korean and Japanese history and folklore but there were no maps to describe the way the land looked. Instead Kara-tur was a mish-mash of different oriental cultures which were divided up into regions later on.

As a company that was solidly tied to D&D and AD&D at the time (just look at the amount of content that White Dwarf pumped out), it's hardly surprising that GW wanted a piece of this oriental action. The figures mentioned above were perfect for the new character classes created for Oriental Adventures, Ninja, Wu-Jen (magic users), Kensai (weapon masters), Shukenja (Clerics) and Monks.

With a range of figures on the go it wasn't too much of a surprise that GW included an oriental setting into their own games despite not making a huge effort to describe them in any detail. The trouble is that the range contains figures that are obviously from a fantasy Japan (Ninja's, Samurai, Ronin etc) and some that are more suited to mainland asia ( Wu Jen and some of the foot soldiers), the majority being the former. Warhammer's world map clearly delineates between Cathay (Ancient China) and Nippon (Feudal Japan), unlike the more mixed AD&D background. 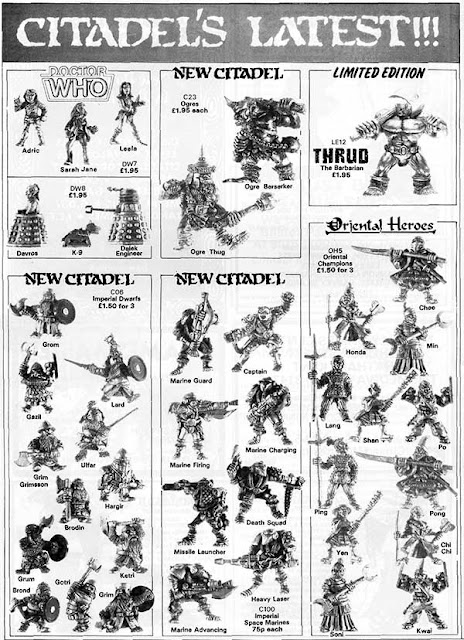 This causes a bit of a problem for developing either as a location for setting the game. If you choose to develop Cathay, which is theoretically reachable by land from the old world, then it means developing a lot more figures and ensuring that the background is suitably different from Nippon to make it a playable entity. Cathay is probably as big as the old world and it's people and places just as mixed and interesting. To develop a suitable background would have been a major undertaking and probably taken a lot of focus away from Warhammer's faux-europe aesthetic. More effort was made to develop Nippon as a playable force with army an army list in Ravening Hordes for 2nd Edition and a mercenary list in Warhammer Armies for 3rd. 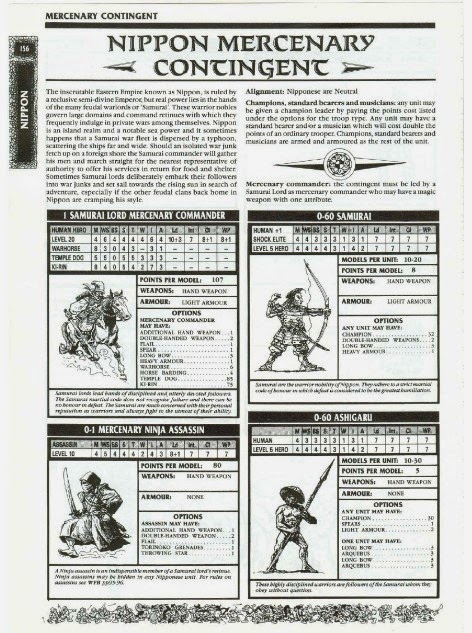 The biggest issue with developing Nippon is a simple one. Geography. Nippon is isolated on the far side of the world. To get there requires a route through Cathay or the even more mysterious Ind, and then a sea journey to the actual islands. This is hell of a long journey for an army from the old world to travel. The alternative is developing local enemies, oriental themed chaos forces, Cathay again, Ind possibly etc etc. Again this is a big old job and requires the splitting of the focus for the Wrahammer world. 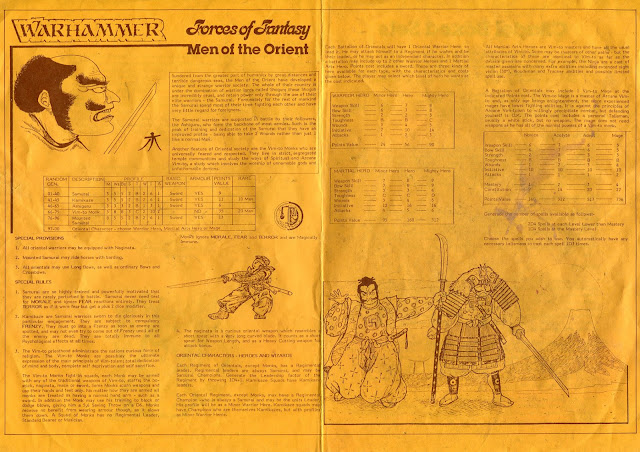 In order to do the setting justice then you would essentially have to work along the same lines as Oriental Adventures and build a game who's focus is almost entirely based in and around the islands of Nippon. It would reflect the politics, fighting styles and local enemies of the people of Nippon (and to some extent Cathay) and because of Nippon's geographical location (just as in the real world) the game background would be fairly insular, the problems of the rest of the world would have little impact. It is possible that if GW had ever completed the planned adventure book for Lustria and it had proven a success, then a second book may well have been set in Nippon. In fact, Dave Morris wrote a draft of a book called Tetsubo (Japanese for Warhammer) which was a setting for WFRP (rather than WFB) and was full of the kind of detail that you would require in order to set your adventures there. It was however rejected by Games Workshop, probably for the sorts of reasons I've discussed (thanks to Mark Kelly for informing of this). 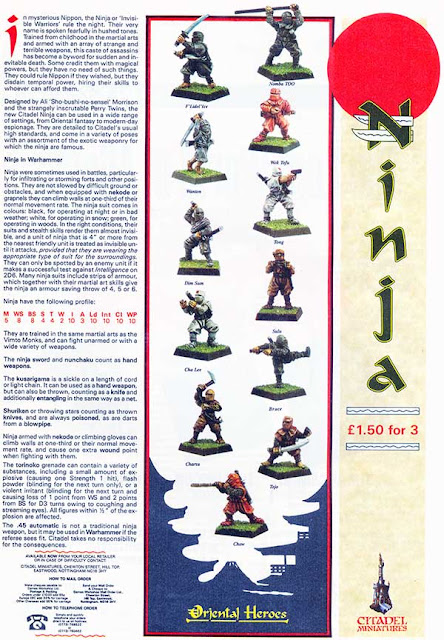 It is the possibility of these things that keeps this hobby interesting. As gamers who are still enamoured by the aesthetics of the era of the first 3 versions of Warhammer, the idea that we can expand our horizons and explore the world is incredibly tempting. The fact that these figures and outlines were left for us to pick up 30 odd years later, that they are still waiting to be explored, that there is till so much depth that hasn't been plumbed, is liberating. It all too easy to imagine GW's worlds as very tightly controlled, as having their histories written and that 'canon' holds sway over all that is possible. If your gaze just wanders you realise that there is still so many possibilities hiding in those books, magazines and leaflets. 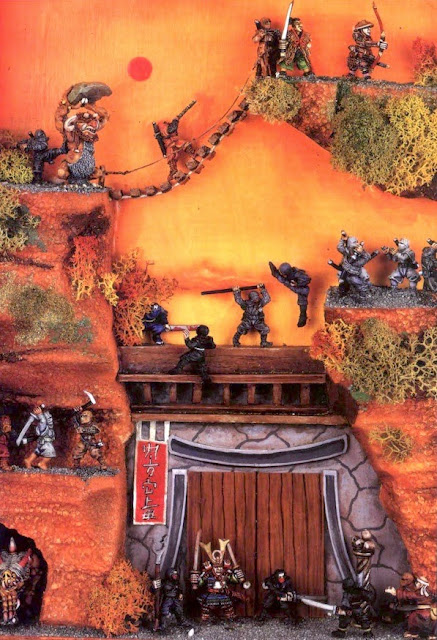 I don't expect everyone to run out and buy an army made up classic Oriental Heroes figures, in fact I think an army based project would possibly bankrupt you, but a skirmish or a themed campaign could be spectacular. If you are looking for your next Oldhammer project, and you have had it up here with Orc's and Dwarves, try looking east. Where the sun is rising......

It is also worth noting that GW also published an Eastern suppliment for Runequest. Land of the Ninja was a joint project between Chaosium and Avalon Hill and was published in the UK by GW. Unlike other Runequest versions which are all based the world of Glorantha, 3rd Edition was set in a non specific fantasy world. Land of the Ninja went further in distancing itself from the Glorantha setting (which is more akin to a fantasy Bronze age) by actually setting itself in a Fantasy version of Japan itself, in effect a historical setting with Fantastical monsters and magic added. It is a great book full a wonderful idea about the kinds of creatures that might be suitable for a Nippon/Japan setting. 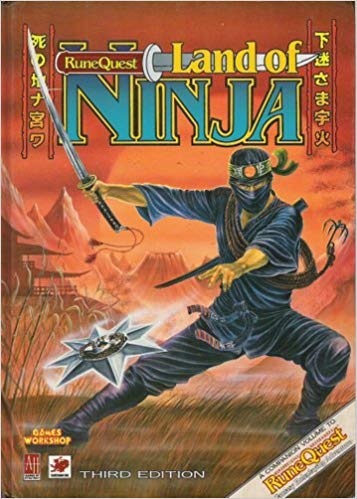