December 14, 2017
Part of being an adult is having the kind of disposable income that you could only dream of as a kid. This essentially means that you can piss your hard earned cash up the wall on some silly dad-soldiers providing your wife doesn't mind (or catch you, whichever one describes your relationship). What ebay provides is the ability to funnel these cash splurges into non-new products. Essentially ebay turns your urge to splurge into a time travel experience. 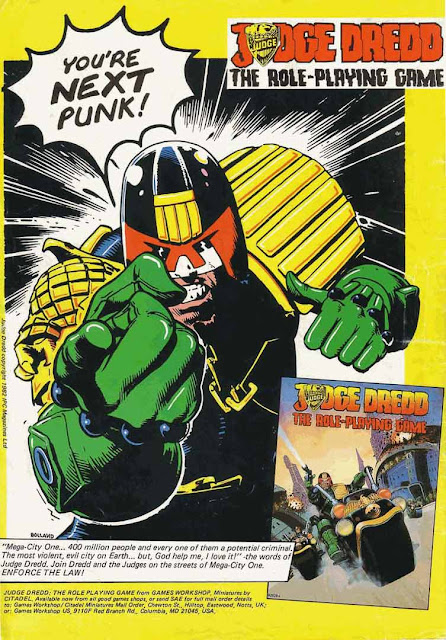 This means that you can flick through an old copy of White Dwarf, get inspired or just see some shiny and pop over to that virtual wall of blister packs, to that time warped mail order page and score yourself that mini that you want so desperately (that you didn't know you desired till 30 seconds ago). The fact that you might not be able to find it straight away just reflects the frustration you used to suffer when you had paid for your bus fare into town, marched round to your local hobby shop, braved the hard, mulleted stares of the older gamers and spent a fruitless hour scan through the racks of blisters only to find that none of the Orc packs have the mini that you want. 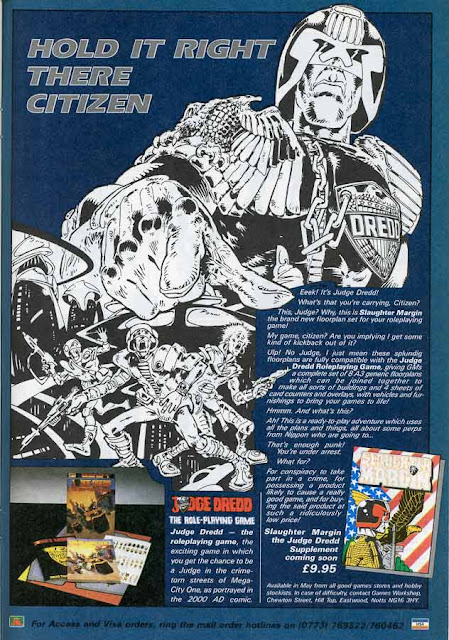 This state of affairs has led me to buying all sorts of stuff that might never get played or painted but fill a consumerist hole that newness doesn't quite manage. One of my latest purchases was Judge Dredd - The Roleplaying Game. I bought it mostly out of curiosity, having been a Dredd fan for years and being old enough to remember when the RPG regularly had articles in White Dwarf (they stopped in issue 96) and I wanted to find out how the game fitted into the Game Workshop oeuvre. Of course being an avowed lead head I'm well aware of the crossover that the Judge Dredd range had with Rogue Trader (and the fantasy range for that matter) so owning seemed like a no brainer.
So what have we got? Well, JD:RPG was written by Marc Gascoigne and Rick Priestley. Rick we all know and love but Marc tends to get overshadowed in Oldhammery circles which is something of a mystery. He is, after all, partly responsible for Bloodbowl, Chainsaw Warrior, Warhammer Fantasy Roleplay, Sourcebooks for Call of Cthulu, Paranoia and Shadowrun. He wrote one of the Fighting Fantasy Books and Edited a load more. He helped to set up and run Black Library and Inferno magazine and also helped write some Sonic the Hedgehog books (everyone love Sonic, right?) So it's fair to say that JD:RPG has a pretty good pedigree. It first appeared in a neat little box (like most of GW games at the time) in 1985. It could be argued that apart from Warhammer, it was the first proper Games Workshop publication (although their were other games previously like Apocalypse, Calamity and Battle cars) as it was a sci-fantasy game with it's own range of miniatures attached. 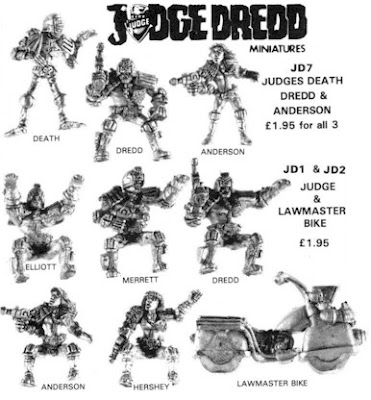 Of Course, Strictly speaking the game is an RPG. You have a GM who guides the players through an adventure, with them making decisions and fighting baddies. The players are a squad of Judges and for the most part the Adventures take the form of investigations. The Judges cruise around on their Law masters and get the call to deal with an incident and that leads to more complex and detailed circumstances. In that way it diverges from the usual dungeon bashing concept, you can argue that the Dispatcher at justice HQ replicates the role of the wizard or king that send the Adventurers on a quest but the fact that the adventure then takes the form of an investigation reflects other games such as Call of Cthulu and later some of the aspects that help make WFRP different from D&D.
The system itself is D10's and percentiles like RQ and WFRP and character generation is along the same lines with various stats that fit the background, with the noticeable exception of Strength which is on a scale of 2-4 and has implications on a characters ability to take damage.  The hit location charts will be familiar to players of Fantasy Role-play as well. While your creating your character if you accidentally gain high rolls in the relevant stats then you can enrol your character as a Tec, Med or Psi judge. Anyway we all know how RPG's work by now. Character progression seems nice as you work your way up to be being an experienced judge and gain useful skills to give you the edge against the perps. 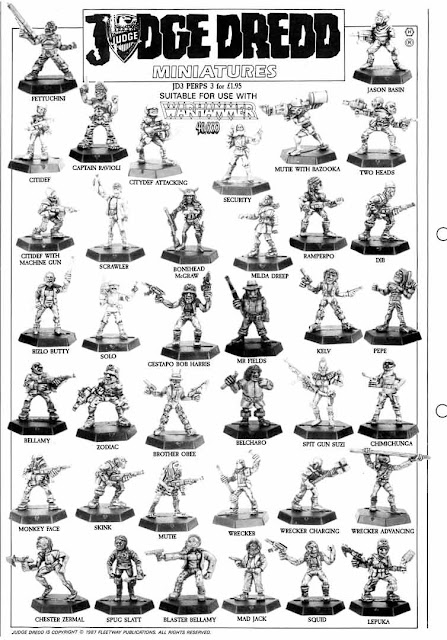 The original box game comes with two books, the Judge's Manual and the Games Masters book. The GM book especially is a superb guide to the Dredd world. It covers the Law code, characters, crazes, places, products and loads more of the first 8 years of classic Judge Dredd. With a background as rich and complex as the Dredd world, the books do a fantastic job of explaining all the details and minutiae. It's a fantastic resource for anybody into Dredd and Megacity, where else can you find a detailed look at Mega-city 1's laws as well as a detailed list of futuristic slang? While the GM book details all you need to run a gam the Judges Manual provides all the details that a Judge will need in in order to survive in a Meg-city. From creating your character to how to carry out an arrest, everything for the player is right there in your hands. The box also came with a set of dice and two full colour floor maps along with cut out, card character figures (the assumption being that you wouldn't have any figures yet). These, along with the later Citi-Block expansion, illustrated that the game was intended to be played on the table top using figures when it got down to the nitty gritty of combat and pursuit. In a way this kind of sci-fi dungeon crawling could be looked at as the Grand-daddy of Necromunda and is certainly something that needs to be taken into account while considering how sci-fi skirmish games evolved (along side the rather more silly Paranoia version). 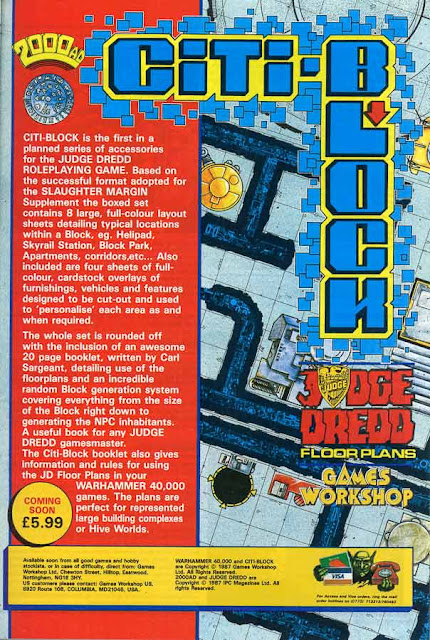 Without having sales figures in front of me I can only assume that Games Workshop did pretty well out of the 2000Ad licence. As well as the JD:RPG itself they also produced 2 Adventure packs (Judgement Day and Slaughter Margin), the afore mentioned Citi-Block expansion and pretty expansive range of miniatures. They publish 17 articles in White Dwarf and also The Judge Dredd Companion which was chock full of material of a similar quality (interestingly most online reviews of the Companion book simply state that it is made up of material previously published in White Dwarf. This isn't the case. It is all new material and put together with the White Dwarf articles gives you a pretty substantial amount of written content).


The companion contains some ready made investigations but also news skills, a guide to Brit-cit, a solo game, driving rules, a hole new board game and loads more. GW had also produced a Judge Dredd Board game in 82 and would go on to produce Bloc-Mania followed up by Mega-Mania and then a Rogue Trooper game as well. They produced miniatures for a Variety of Rogue Trooper Characters as well as a small set for Strontium Dog. 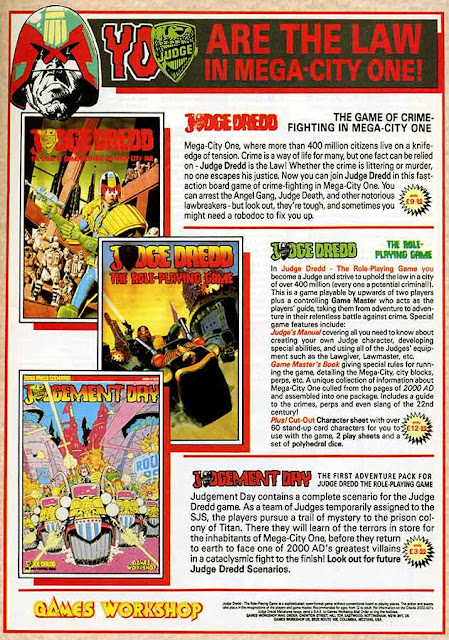 The legacy of this stage of GW's growth (they lost the license in 95 and had destroy all their stock apparently) can be seen in Rogue Trader especially. The sense of humour in RT has a lot in common with the dark mirth of Dredd's world. The very inclusion of Arbites in the 40K world is a direct result of Judge Dredd figures being in citadel's catalogue as well as thing like power boards (Sky Surfer models) and Motor Bikes being included in the rules. You could even argue that the idea of Muties being included in the original RT book (with little reference to Chaos) is a direct result of infection from the cursed earth. 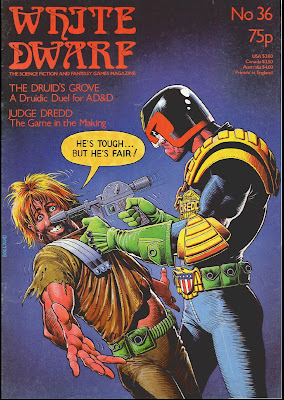 After GW lost the license various versions of Judge Dredd games have appeared, some more RPG based (a modified version of the Traveller mechanics) and a skirmish based war-game. Both Foundry and Mongoose have produced miniatures ranges and Warlord look like they are going to bring something out in the future. The thing is, to my mind, the original Judge Dredd - The Roleplaying Game combines these two things. It's a system that has had a influence on the way GW has developed ever since it was part of the stable and it's a great artefact all by itself. If you are a GW fan and a Dredd fan then you really should own this.

Why are you still here?

You know where eBay is.
2000ad Judge Dredd Oldhammer