December 27, 2017
I recently took advantage of some pre-Christmas offers from some games companies in order to try and build some more appropriate scenery for my Dutch Revolt games (of course anything used in those is easily transferrable to a fantasy setting so double win!). I've been admiring the scenery that Rich and Nick build over on the Lard Island News blog as well as another Lard associate Sidney and I decided I wanted a bit more life in my scenery settings. The buildings that I've already got from 4ground are great but they are a little bit more fantasy than I would like and are also a bit more urban than I need for some games, so I decided I'd try my hand at producing a more rural, villagy setting. 4ground produce some great buildings and I had been eyeing up their Timber Framed Cottage for some time. As well as the painted version, they also do a raw silhouette version which is just your basic cottage with no colours, minimum textures and no detailing. I figured these would be an ideal base for the village buildings and as 4ground were kind enough to offer a black Friday discount I dived and bought 6 cottages and some detailing kits (a mix of Stuart and Tudor Versions). 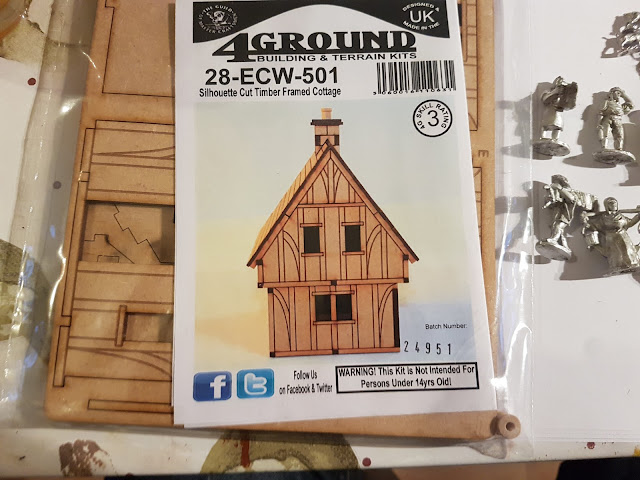 In addition to this I decided I needed to have some villagers to be wandering around the place making it look busy. There are a variety of places to pick up civilians but very few (if any) fit the time frame (late 1500's) particularly well but as we're talking about peasants who were never the most fashionable of people we can take a bit of artistic licence. Warlord do some very nice civilian figures in their Italian Wars/Landsknecht range and as they were offering 15% off via a nice email they sent me I plumped for a couple of sets , 'Market Day' and 'Landsknecht Villagers', as well as a nice big family of pigs that can be rooting around. 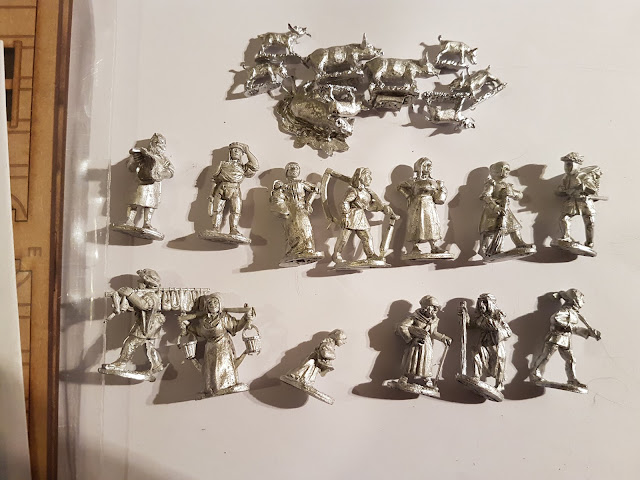 Having did a bit of googling I knew the kind of look I wanted to go for in my Village.

﻿
﻿As you can see from these images, although the colour and feel of the buildings are similar the construction differs slightly between each one. Some have timber framing showing through, some have boarding, some are just plastered, their are tiles and thatching on them and their are leans-tos and other additions to the outsides of the buildings.

It was this mismatched but homogenous look I wanted to go for. So I need to be able to make my single kit go as far as possible. So I pondered about it during the day and started faffing around with some solutions in the evening. I built a couple of the basic house shapes to see how they go together and what I could get away with just in the way they are constructed. The basic cottage can be made so that the top half can be oriented with the eaves to the side or facing to front. This gives two quite different looks. I also found that I can build the whole thing inside out so that I can have a plain mdf wall that I can texture any way I want and after a quick rummage I found some quick drying Polyfilla that I can use to add some rough plastering texture. I primed the mdf with some watered down PVA and once that had dried had a got at texturing random parts of the walls as if they were brick showing through the broken off plaster. Once that was done I used my finger to roughly apply the Polyfilla randomly on the walls to get a rough texture. I was quite happy with the result so then I had a go at a timber framed house to see if I could get the plaster effect to work between the timbers and again it worked pretty well. 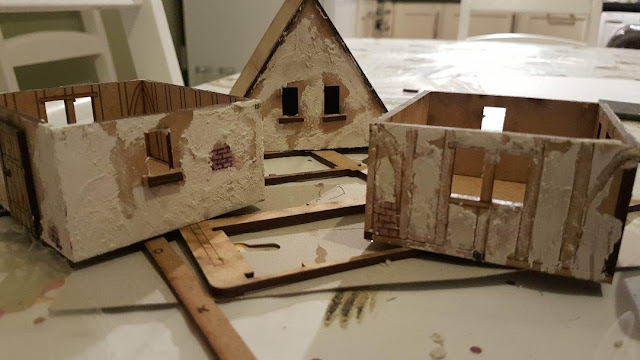 Next up was a bit of roofing work on the first two houses. I quick scan of the cereal box collection the kids have managed to build up on top of the fridge revealed that a packet of Honey Loops was pretty much finished so I quickly purloined the box and rendered it down in to useful strips. A lengthy time of measuring and cutting later, the strips were glued down to the roofs. PVA was liberally slathered here and there and I ended up with a fairly robust finish. A quick trim down the sides and they are done.﻿ 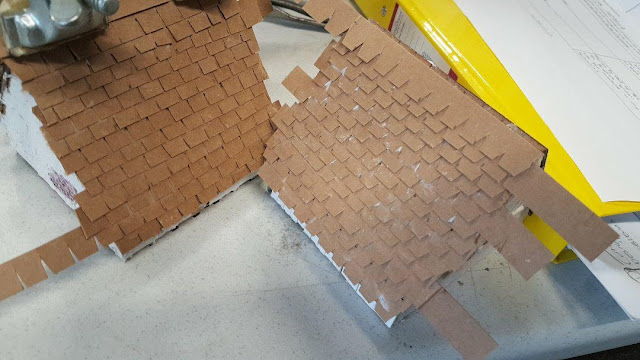 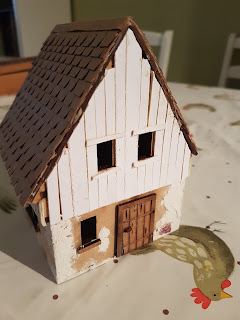 Having had a scan of the paintings I noticed a couple of the houses had planking covering parts of the  upper floors so this gives me another surface finish to distinguish some of the houses. Just before the christmas holiday I'd gotten as far as this on the first two houses. Next up will be placing them on a base and building a little garden for them. Then it's onto painting them. 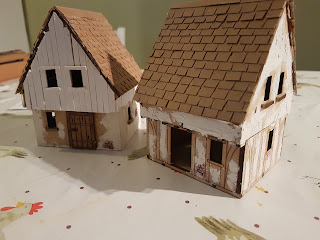