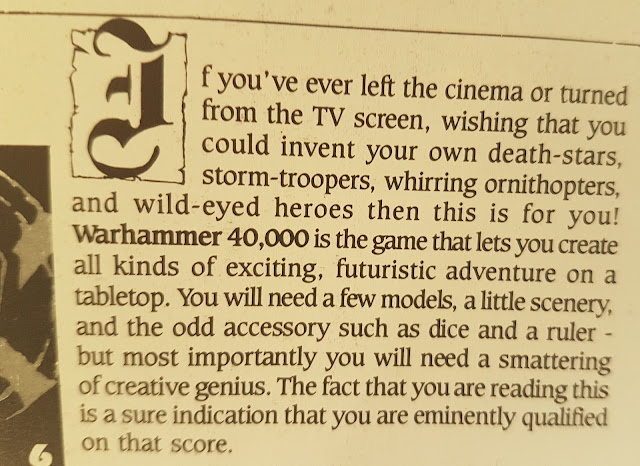 30 years after it's release it's still really important to me and to a whole load of gamers of a similar vintage.

The book that it introduces started the massive, world encompassing game that exists today.

The thing is (and there is always a thing), the people who play the game today have a very different point of view than people like me. Think about it. If you were introduced to 40K at any time in the last 20 years, then your experience is of an incredibly polished product with gorgeously executed art work and professionally completed layout within perfectly bound hard or soft back books. There is a accessible product with a life cycle (there will be a new edition within a handful of years) and a fixed set of additional purchases (codex, army, scenery, paints, dice, templates etc). You will know that you need troops, elites, heavy support and characters. You will know what kind of game you are going to play and you will know the background fluff of your army. It's all there for you to access. The last 6 -7 editions of the game will all fit that description.

If that is your experience of 40K, coming across Rogue Trader must be a perplexing experience.

Overtime I've come across youtube videos and forum or FB threads that try to tackle the glory that is Rogue Trader. In general the approach is to discuss how weird the book is, how odd the art work is and how wrong the fluff is. Rogue Trader is, to modern gamers, an oddity. A strange reflection of the game they recognise but as if viewed through a cracked mirror. Like the game they know but from an alternative dimension. They must look at the book and wonder if it's real or if it has been produced as an elaborate joke. And when you put yourself in their place, you can kind of understand where their coming from. Even if you came into the game at second edition, this was the introduction to the book. 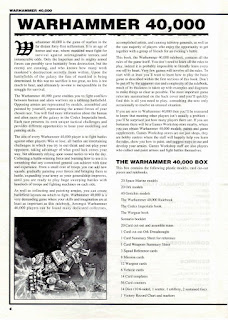 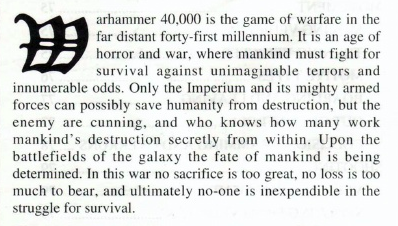 There you go. Everything you need to know. Modern players will recognise that immediately . 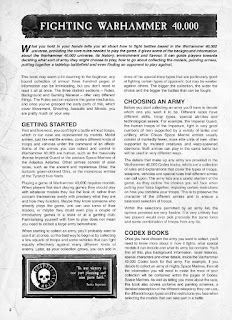 From second ed on you get the "This is a war-game set in the 40K universe. You can fight stuff with Space Marines. Get your dice on". You have a game within a framework. Brilliant.

If that is your experience of 40K then opening up a copy of Rogue Trader where they say things like 'Invent', 'Create', 'Adventure' and 'Exciting' may well be intimidating. Looking at the pictures and not being able to tell exactly which faction is represented could be mildly disturbing. Knowing all the fluff that came after but being unable to match it's roots can be off putting.
Rogue Trader tends to be treated as a charming oddity, a wrong step before GW got the game right. The strange, alien place where the ideas that coalesced into the modern version of 40K came from.

I can see their point of view.

But it's not what I see when I read Rogue Trader.

Rogue Trader introduces itself as a Sci-fi Adventure game. It mentions Storm Troopers and Death Stars (Star Wars) and Ornithopters (Dune) as well as wild eyed heroes but also explicitly Cinema and TV.
It links Rogue Trader not just to it's own internal story, but to all the other exciting sci-fi possibilities that had been assaulting the teenage minds throughout the late 70's and 80's. You have to consider what it was that Star Wars actually started. That film, and it's sequels where not only defining experiences for kids across the world (hands up if you ever tried to use the force?) but were genuine financial successes.
Film studios sat up and paid attention. From generally being cynical about the idea that audiences would pay to see Sci-fi films (see how long it took for a Star Trek film to actually get the green light), the success of Star Wars (and Close Encounters of the Third Kind for that matter) showed that there was a massive audience for Sci-fi out there and they rushed to cash in on the Sci-fi craze. Star Crash, Message from Space, The Black Hole, Flash Gordon, Star Trek: the Motion Picture, Alien, E.T., Blade Runner, Dune, Terminator and Explorers were just a few films that you could probably find at your local video rental store (remember them?) and in 87 you could see Running Man, Predator, Hellraiser and Robocop at the cinema. Then there was TV, not only re-runs of Star Trek and the continuing adventures of Dr.Who but american Star Wars cash in's like Battle Star Galactica and Buck Rogers in the 25th Century (both of which had cash in movies as well). Other TV series you may have been allowed to watch (there was only one TV in the house) such as Blakes 7, V, Automan, TerraHawks, Chocky, Tripods, Alf, Star Trek TNG (started in 87),  was well as less sci-fi oriented (but still exciting !) adventure fodder like the A-Team and Airwolf. I'm not even going start on TV cartoon shows and I've mention 2000ad many times in previous posts. 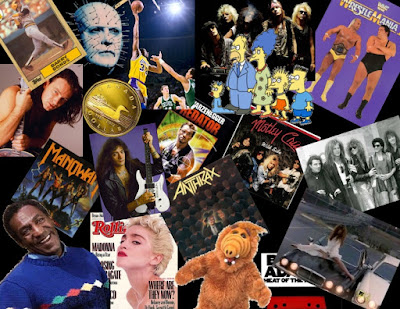 This was the experience of being a kid in Britain in the late 80's (and i'm sure it was similar to many kids throughout the world). And it was this experience that Rogue Trader was tapping into in 1987 with that opening statement.
If you were lucky enough to stumble onto the game and a bunch of mates who wanted to play then you were presented with a sandbox of rules that allowed you to build adventures of endless variety only limited by your imagination, the scenery you could construct and the miniatures you could find.
It's for this reason that Rogue Trader is still a holy book to so many gamers (of a certain age) out there. What we see in modern 40k is a trimmed down, sleek, humourless and professional war-game product that takes some of the ideas from Rogue Trader, expands on them and produces a very restrictive but colourful gaming experience. Because we cut our teeth on a game that allowed (and still allows) us to create an adventure with rules to cover nearly anything we could imagine, we still want to see this in our games. We hark back to that limitless feel and the idea that their were no boundaries in the Universe that couldn't be crossed with a bit of imagination and some plastic tubs and we mourn what has been lost, not only within the game but within the players.

So when modern players look at a copy of Rogue Trader and see a charming oddity and congratulate themselves on having been born in era of virtual sculpting, desk top publishing and digital artwork we shrug and occasionally join in.
But then gamers like me look at the young guys games, the table crowded with massive toys of doom, lined up neatly, facing their enemies neat line, playing for a max of 6 rounds and we weep a little. For what the game has lost and for the experience that the younger guys can never really have.

Thats why I love Rogue Trader. The fact that you're reading this is a sure indication that you probably do to.