September 24, 2017
Once upon a time someone gave Jes Goodwin the task of designing a range of Ogres. It wasn't the first set of Ogres the GW ever made. There were some left overs from the Runequest and Fiend Factory ranges and there was Golfag's ogre regiment as well but still, Jes was asked to do some. 16 classic models later (plus a another 5 in the redesigned Golfag's) and you have the most iconic image of the Warhammer Ogre ever created. Never mind the current fat plastics. The only thing that ever came close since were the Marauder Landsneckt Ogre's but the Jes ones probably still have the edge. So now, as we gasp at the stupid prices that BIN muppets ask for the classics on fleabay, we must ask ourselves a very important question.

What the fuck is an Ogre?

As with all creatures of a fantasy bent they come from somewhere.

So lets have shufty. Wikipedia is quite handy on this subject. Geoffrey of Monmouth reckoned that Ogres lived in Britain before humans got there. Chretien de Troyes wrote about Percevel coming to the Land of the Ogres to destroy them with his Lance. As I'm sure you'll be aware from the name, Chretien was french and Wiki postulates that 'Ogre' is a french word that comes from an Etruscan god, Orcus, who liked to eat people. The late Orcus then leads into all kinds of connexions, most intriguingly into Beowulf (orcnëas) which duly influence that Tolkien bloke in some way (he in fact wrote a translation of Beowulf, he loved that kind of shit). 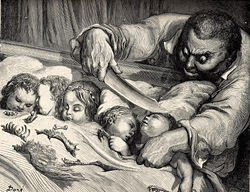 The name really comes into it's own with some 17th century French authors who wrote fairy tales based on some of the tales of a Neapolitan writer. These fairy tales included Ogre's who were generally big unpleasant humanoids who were keen to munch on humans, or more specifically, children. They were generally big and stupid and got tricked in the end but every story needs a baddie.

The interesting thing I take from that is the Beowulf connection. Grendel is your archetypal monster, munching on vikings as they sleep. 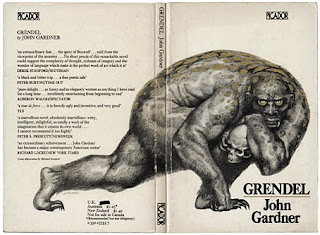 He isn't really described in any detail in the saga, apart from allusions to his enormous size and the fact that he is vaguely human in shape. It is also mentioned that he is a descendant of Cain, the biblical muderer (if you want to look a bit further into this have a look at what the Mormons thought about the Mark of Cain), who had degenerated into monsters. So you have a big old monstrous humanoid who likes to eat people. That's fairly Ogre like.

So you've got a Biblical and Saxon connection. We could look at pre-biblical images of monsters? Probably the best bet is to look at the Odyssey and in particular, Polyphemus. Odysseus and his men land on the island of Giants and are trapped in a cave by the cyclops. 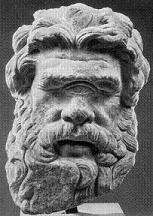 He is a giant Human with one eye and delights in eating half a dozen of Odysseus' men. So again we have a big scary humanoid with a penchant for eating people. Of course, Polyphemus is described as a Giant and not an Ogre so this is problematic. Or is it. An alternative route of the word Ogre is from the biblical name Og which is apparently the name of the last of the Giants (no i didn't know there were giants in the bible either).  The issue is further complicated when you decide to take the time to describe a giant - They are big humanoid creatures who like to eat people in fairy tales. So the same as an Ogre then. Giants and Ogres tend to be freely used in each others places in fairy tales depending on the translation and it's quite easy to assume that there is some common reason for the ancestors of Giants and Ogres befell the same mischief that caused them to grow and degenerate. Are Giants just big Ogres? Are Ogres just little Giants? In fairy tales the answer is probably yes. 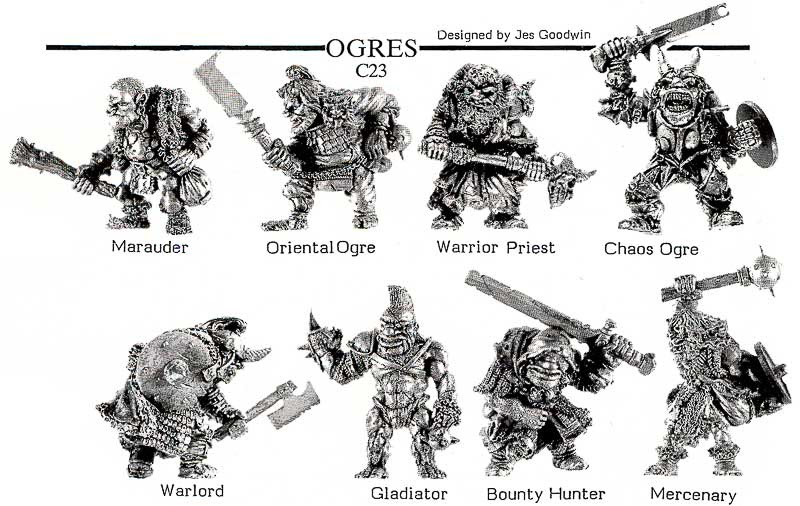 It's at this point that we should have a look at the Ogres in question and see if we can draw any conclusions from their dress in order to make some conclusions about their origins. The first 8 to come out have a very mixed dress sense. You've got plate armour (which nut case thought that was a good idea, making armour for an Ogre, did he expect to get paid?), furs of various kinds and the occasionally piece of chainmail. The Gladiator certainly looks like he could be form the fighting pits round Araby but it doesn't necessarily mean thats where he's from. The bounty hunter is dressed in a similar fashion to the Humans from the empire as is the Marauder. The Mercenary isn't wearing much at all and the Priest is dressed in various rags (very much like a character that features in Time Bandits). 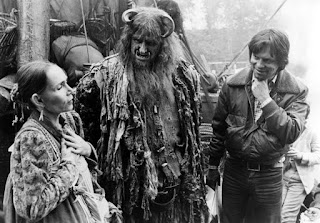 This leaves us with the intriguing Oriental Ogre and the Warlord. The warlord has helmet with a top-knot and a leather neck guard and a long coat made of scale or lamellar armour. These are generally tropes to signify various steppes tribes, the most famous of which would be the Huns or the Mongols.

The next 8 repeat a couple of the tropes from the previous bunch. Plate armour - Check. Semi-naked nut cases -Check. Hooded Empire inhabitant - Check. What makes another couple of appearances is the Hunnic type helmet. The round helm with a fur brim, spiked on top with leather neckgaurds hanging down. There's one on the Thug and there's one Hroth-yog. This is repeated in Jes' new Golgfag's regiment as well.

Do you know? It's like someone is trying to point me eastwards.

The most obvious monstrous influence form the east is the Oni. I know, I know. That's Japan. But bear with me. 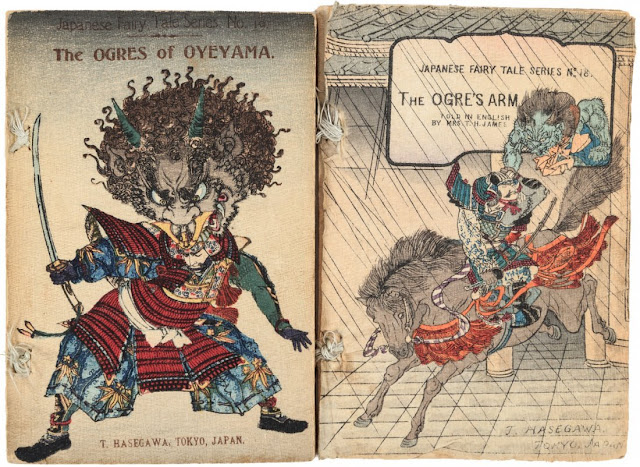 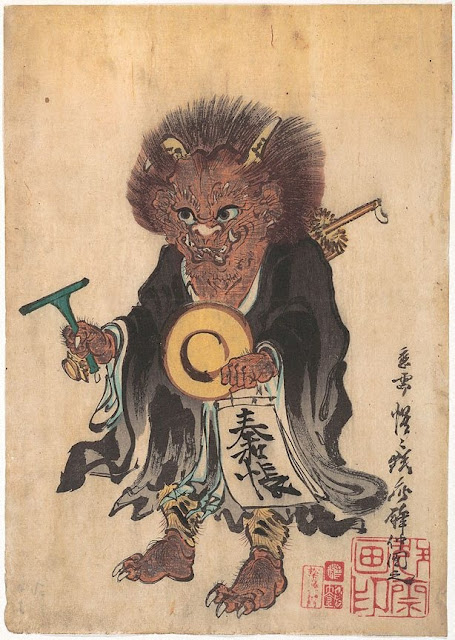 Oni are a evil spirit from Japan. Originally Oni didn't have a form in Japanese folklore and were invisible and formless spirits. They caused disaster and disease and could take on different shapes and often devoured people. The name comes from a Chinese symbol meaning invisible. Over time Japanese culture was influenced by cultures and religions form further west particularly buddhism from india. This brought with it the idea of Rakshasa (which originated in Hindu mythology) which were large, ugly humanoids which ate humans. 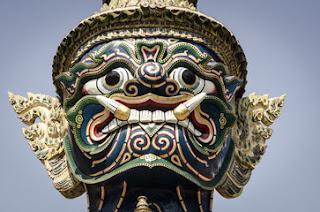 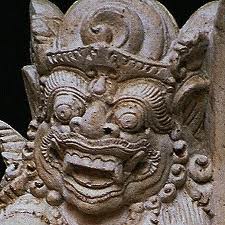 Under the influence of these and other ghostly spirits (which may also be the root of Djinn in Islamic mythology) the Japanese Anthropomorphised Oni to the point where they take on their modern form of big ugly scary humanoids that eat people. 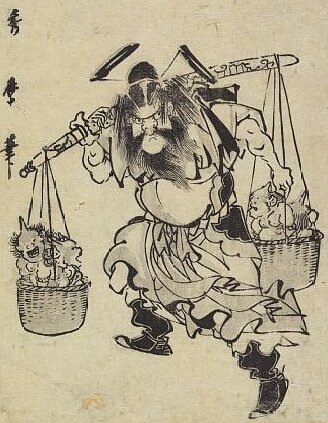 So we have an alternate origin of the Ogre. From the mythology of central asia.

Generally wherever they abide, Ogre's are seen as a Monster who eats people and can threaten the good people of the land a fact that was played upon heavily with everyones favourite Ogre. 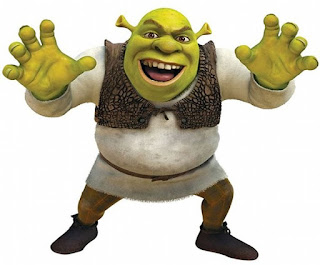 They appear in Fairy Tales such as Puss in Boots and Sleeping Beauty as well as host of others. They are related to Giants and have possibly been around in the world as long as humans. They are widespread, from the North of Europe to the Mediterranean and from France all the way to Japan. 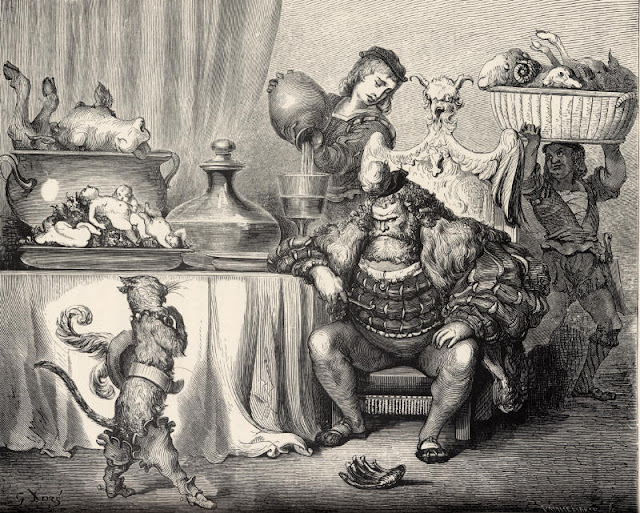 When we translate this information into the Warhammer world we come up with a rather intriguing thought. Unlike a lot of Monsters in the Old World we can't just blame the occurrence of Ogres on (wavey hand motion) CHAOS!!! (booooo! Hiss!). Ogres are to stable, not mutated enough and turn up being too useful on occasion.
WFRP claims that they were formerly Human and hints at the cheating Chaos answer but WFB3 simply suggests that they are a distant relation to humanity. It's not a great leap to imagine that they are another evolutionary line for the Human race, one that was extended even longer into the Giants. As such they would have been as common as their little cousins throughout the Warhammer world and would have stuck close as it seems people were one of it's preferred food groups (A Doctor a day keeps the Apple away?). As humanity progressed, they became better a defending themselves and gradually the number of Ogre's dwindled as they were defeated by their smaller cousins (a fate that the Giants no doubt suffered as well). The few that remained retreated to the woods, forests and mountains, some still seeking unwary men to chew and other learning to work with the little people in order to gain some tasty treats. As time went on, the men forgot that they were cousins to the Ogre's and blamed their existence on the magic that they barely understood and told tales of the man eating monsters that dwelt deep in the forests in order to scare their young into staying in bed. 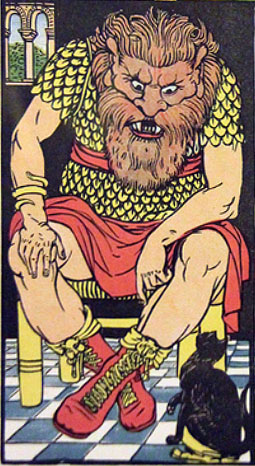