Darran Marvil and the case of annoying Assassins 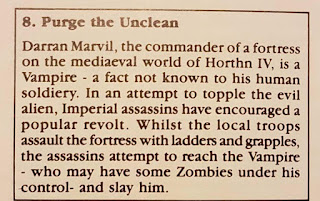 One of the great things about the Warhammer Siege book is that it has a load of scenarios buried in there. Little stories about why there would be a siege happening in the 40K universe and they mix up various different fantasy and sci-fi tropes in order to come up with some convincing tales. As an addendum to the scenarios in the Rogue Trader rule book they are a welcome bit of fun.

The above is my favourite but I think it's got more scope than just a siege game.

Lets break this up a little.

Darran Marvil is Vampire. Vampire's in 40K are shape changers and can appear to be any race they wish in order to blend in. Darran is a powerful enough Vamp to have reached the top level of control on an imperial world. He is a planetary governor! He's the top dog! And nobody but the inquisition knows!

People aren't Planetary Governors with out having a fair amount of backing and security. So he's going to have some top dog guards with him. We'll have to decide what these guys look like and how they are armed. Also he's got some Zombies! We're going to have to investigate these in a bit more detail.

Secondly, you've got the revolting troops. Now this is a Feudal world which are at a stage where they are either pre automatic weapon level of technology so we can have a look at the kinds of troops we want to be representing these. Plus we probably want some kind of inquisition character (or characters) as a bit of stiffener to provide the locals with some moral support and rousing speeches.

Thirdly we have the assassins. These don't need to be super powerful modern type assassins but they should be able to handle themselves and probably use the stats for assassins form the RT book. I think a max of three should do. 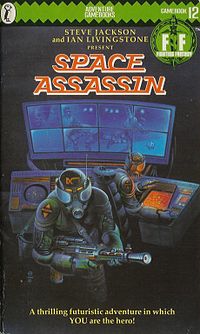 As I've already said, I don't want this to be a siege game so we have to build up a situation for the game to take place in.

In the RT book Fuedal worlds are described as being deliberately kept at a low level of technology for the benefit of the empire. This is normally cos they produce food or materials for the local region and it suits level of production for the population not to have access to modern technology. The RT book also mentions that Governors usually reside in space stations orbiting the planet or in strange isolated castles far away from the populace. Taking one of these to be the case, we want to avoid the siege at the castle and we can't get the peasants up to the space station so we have to go with the premise that Darran has been lured away from his base for some reason. This would be a normal thing for a governor to do when something of import has happened, he'd be called upon to inspect a discovery, make a decision about a dispute or solve some other important issue. I reckon that this important issue has been fabricated by the inquisitor in order to get Darran away from his lair. Maybe it's something like the reported discovery of an intact STC system. The local Mechanicum Magos, monitoring technological levels, was the one that sent the signal. Is he an inquisition quisling or is he one of Darrans minions? So Darran has come down to the planet with his bodyguard. The bodyguard could be either imperial guard types or well armoured medieval types. Or a mix of both. They should have some las or autoweapons as they should be their to scare the bejesus out of the locals (I quite like the mix of the Skitarii heads and weapons with the cult initiates bodies, gives a nice medieval but modern look, but use whatever you fancy). I reckon two groups of 10 would be enough. Darran also has a couple of zombies that he can make use of. These are entirely up to you but they could be troopers that have been resurrected (and converted by you a little bit), or ancillary staff that have been 'recruited' into his cabal. I'd use them to cause fear in the locals, they won't be much use anywhere else apart from comedy value. Diehard and Copplestone have some great sci-fi zombies with guns and mantic do a set without and you are spoiled for choice with non sci-fi zombies so go with what ever takes your fancy. 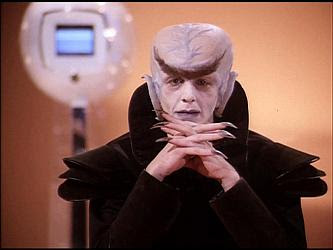 So we've got Darran inspecting this fake discovery when the inquisition trap is sprung. The local militia are up in arms and after Darrans head. I'd use some old school fantasy figures. You could have a ragged mob of fighters with a variety of weapons or you could go for some spear armed foot soldiers or a mix of both. You probably want some missle troops in their as well. Crossbows would probably suit but you could also get away with some muskets as well as they both have entries in the RT rule book. In all i'd be tempted to go for two mobs of melee troops, 10-12 each, plus a similar sized mob of missle troops. These shouldn't be world beaters but with a bit of luck they may just best the Troopers in Darran's retinue if they are distracted. Of course, they may just run away screaming from the Zombies.
This lot will be led by an inquisitor. Again he shouldn't be amazing but he may be needed to go toe to toe with Darran however I wouldn't expect him to win without help or at least Darran being injured. we want there to be a bit of balance here.

Talking of balance, we need to tackle the issue of the Assassins. Now, they are probably going to be fairly hardcore. The standard stats for the Assassin is round about minor hero level and they'd be slightly outclassed by Darran but that's the way we want it. I think 3 assassins would be enough. starting at random places on the table.
Now obviously, if all they have to do is sneak around and take a pot-shot at Darran then the game will be over fairly quickly. So we will have to make it a bit harder for them. 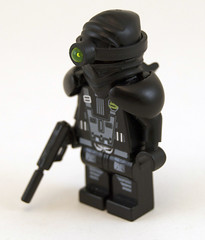 First of all. They ain't from around here. If they are seen by the locals (spotting test on 4d6) them the locals will assume they are witches or devils or some other kind of nasty and immediately give chase or shoot any weapons they have then chase. The only thing that will stop them is the death of the Assassin or a successful  leadership test at -2 by the inquisitor who must be in contact with the unit of locals.

Secondly Darran isn't that easy to kill. Not only does he have several wounds but he can regenerate them by munching on some humans if they happen to be near. He also has a pretty good forcefield that should protect him from most incoming shots. He's also a psyker of some strength so will be able to hand out some punishment from a distance. And finally he will be surrounded by his minions who will only be to happy to jump in front of a bullet for him (look out sir!).

That should be enough to keep the Assassins busy.

Darran and his troops deploy in some ruins in the centre of a long table edge. He has to get off the opposite edge (or kill everybody!) in order to win.

The locals deploy anywhere on the table (they are local after all) as long as they are at least 20 inches from Darran. The table will have some small woods and a few groups of shacks (2 or 3 small buildings in 2 groups).

The Assassins deploy on the opposite long table edge, out of line of site from the locals and at least 18 inches apart.

The Magos is staring at the doohickey and is a slightly befuddled. When the game starts he has no idea how to react and general hides. If he is contacted by the inquisitor he will fight for the locals. Darran may try to control him via a psychic attack in which case he'll fight for him. ( you can represent him with whatever figure you like, he can be a lowly technician type or a power axe wielding, power armoured nut job. Up to you.)

There you go. How to take a small idea and work it into workable scenario.