You can make a new friend but you can't make and old one....: AoS and WFB3 in the same weekend

Once in a blue moon the planets align and lady luck smiles upon you and you manage to squeeze two games sessions into the same weekend. Such was the circumstances that I found myself in this very weekend. And on sunday I fell asleep on the soff and snored like a loon despite my two year old trying to use my ear as a pencil pot. But thats the price we must pay!

Friday I drove round to see Antipixi and we popped our Age Of Sigmar cherry. Admittedly it was only skirmish but i reckon that still counts. For our opening game we chose our 50 renown (no points here!) warbands and played one of the scenarios from the book.

The game runs pretty quickly, it still feels like a Warhammer game, you still hit, wound and save. You still move and you still charge. If you are as use to discarding chunks of Warhammer that you don't like and playing it the way you want to then this will be pretty familiar. The lack of modifiers is pretty refreshing and I did smile at the image of two middle ages men flipping about on the phones/tablets looking for the right rules rather than leafing through big old books but the difference is that the rules are on the 'scroll' for the figure. So provided you read it and remember to use it there isn't any need to refer to the AoS rules themselves as such.

Once we'd run through a game we dropped down to 25 renown which is the recommended size to start the campaign.

The campaign is basically the 6 scenarios in the book played in order and the warbands building up over time. I think we played 4 games in all with the first game being over in about 25 minutes.
We both realised we'd been missing a special rule from the Lord of Plagues which made him much deadlier and we need to figure out how the multiple wounds work if you are in a combat with several figures who are, in effect, individual units. Do you just kill one model or the ones that are in combat with you? Who knows?

You are guaranteed at least 6 renown after each battle (I think the max you can get is 16) as well as the possibility of gaining skills and artifacts to make your Leader better. What this also does is make your warbands nice and mixed in a truly Realms of Chaos fashion without having to roll on charts. The vagaries of the number of renown you've gained means that you tend to take the figures you can afford in that campaign turn so you can get some more bodies on the field.

Neither of our warbands had any shooting and we didn't have any magic so we didn't have a fully rounded experience but the game is fun and quick and works pretty well.
Despite me winning the first three games, Antipixi's warband managed to keep pace with mine and in fact won the 4th game by enough of a margin that he's going to have to get his Dragon Ogre painted. This is exactly what you want from that kind of campaign system cos you don't want the situation where one warband runs off with the lead just cos he won the first couple of games. I'm looking forward to getting the next couple of games in the campaign played.
As an introduction to AoS it's pretty sound. You take along a bunch of figures, play some fast and fun games, learn how the rules work, enjoy yourself. What more could you ask of a ruleset? It's cheap and it works. All you need is the free app and a £6 book. Job done.

All i need to do now is avoid getting lost everytime I try and get back home from Antipixi'x house. 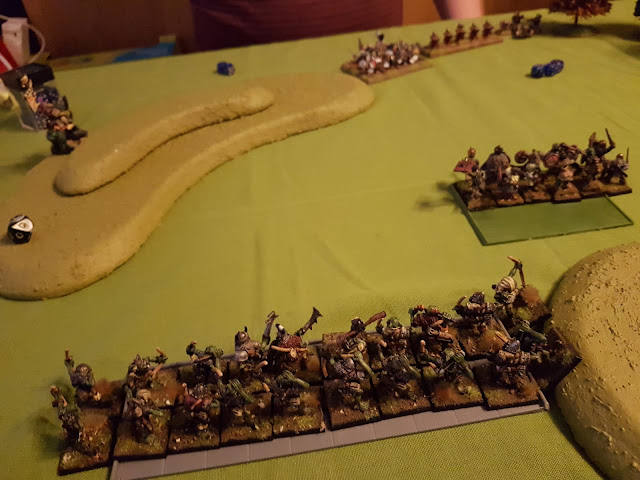 The second half of may gaming weekend went in the other direction, both geographically and chronologically. I drove over to Snicket's gaff where he and Erny had set up a table and snacks for a game of 3rd Ed Warhammer. Snicket had been busy painting up some Dwarf's and wanted to try them out against some nasty green skins so I dutifully laid my Hobgoblins out for their inaugural game of Warhammer. I took 2 units of Hobgoblins, 1 unit of Orc archers and 1 unit small unit of half orcs, I had my Khan on his temple dog, A Shaman and an Army Standard. Snicket had two units of warriors, 1 unit of Iron breakers, 5 crossbow, 5 skirmishing crossbow and a cannon (obviously).


One unit of hobgoblins took a cannon shot to the face straight away and were harassed by crossbow fire which reduced them to less than half their starting size within the first couple of rounds. To avoid the cannon causing defeat single handedly my shaman spent the rest of the game firing windblast at it so that it couldn't fire again.

The other unit of Hobgoblins headed straight towards the two hardest units of Dwarfs and then, just as Snickets started licking his lips, took a sharp right turn and dissapeared into the town. 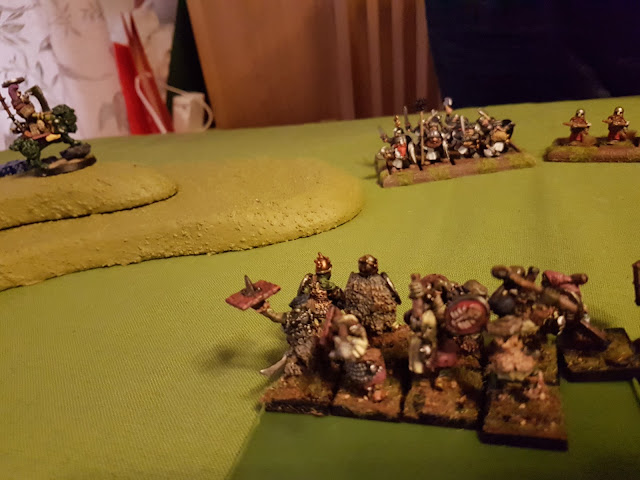 On the other flank, Snickets smaller unit of dwarf's and the crossbowmen suddenly looked a bit worried as the Khan appeared on the hill to their right and the Orcs and half orcs closed in from the front with the depleted hobgoblins heading in their direction as well.

Mention at this point must be made of the Orc Archers who, because of the animosity rule, spent most of the battle behaving like complete dicks and peppering the half-orcs with arrows, while jeering, laughing and shouting at the poor buggers. This sort of behaviour would continue for the majority of the game.
The inevitable happened and the Dwarf's put up a damned good fight holding on for a couple of rounds but when the Hobgoblins finally got to charge into the combat it was essentially all over for that flank. Left with little choice the two main dwarf units moved out of their defensive positions and arranged themselves back to back in order to deal with the threat.

Snicket reckoned he's have the upper hand when it came to the bandy legged greenies but had not factored in the Frenzy and Hatred caused by the Army standard. This combined with the temple dog (even sans Khan after Snicket's General started challenging everybody going) whittled the Dwarf's finest troops away to the point that the spearmen turned and charged the remaining hobgoblins who promptly fled after losing their Frenzy.

All that left was the remnants of the half-orcs (all two of them), the Hobgoblin shaman and the big unit of Dickheads (the Orc archers) who charged the Dwarf spearmen and ground them down despite the heroic efforts of the unit Champion.

So there you go. two games, 30 years apart, both great fun. Proof one does not preclude the other.
Chaos army Greenskins Oldhammer