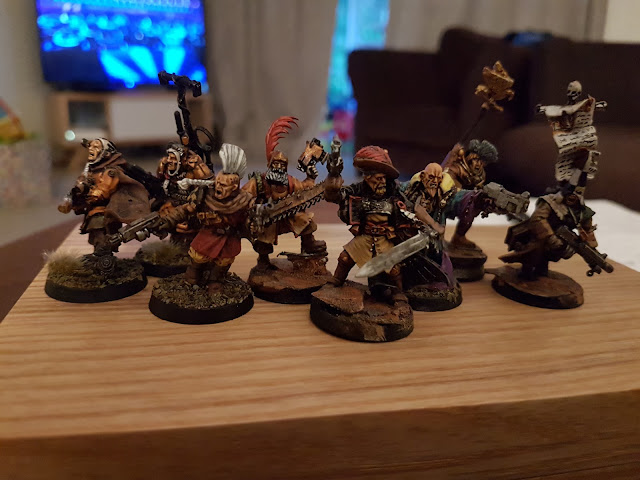 Sometimes adult life throws you a sweet, overhand, sitter of a catch. My Mrs went off with the boys to visit a mate in Brum which left me with the girls who went to bed sensibly after Dr Who. Antipixi was left hanging by a couple of his friends and his mother-in-law came round to entertain his wife. Hey-presto, we have a game night! Antipixi jumped in his jeep and hotfooted round to the Whiskey Lounge and we threw down some min's and dice and had a go at Shadow Wars Armageddon!!! 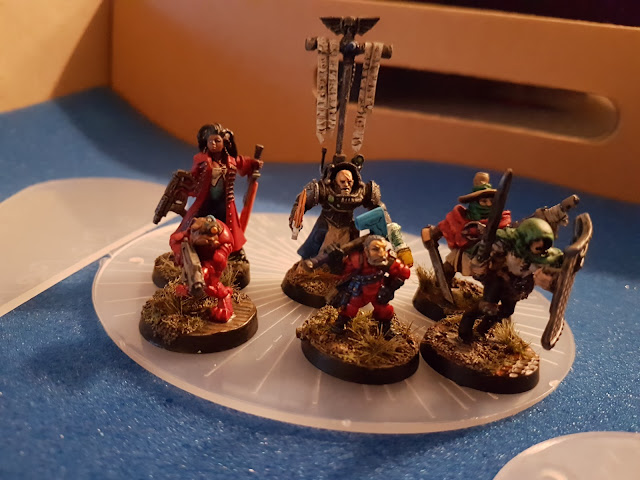 We both went for Inquisitorial Warbands. I went for lots of bodies and very little flash and he went for fewer goons and more gadgets. We worked out our warbands in the time honoured fashion ie at the last minute and on bits of scrap paper and went at it. 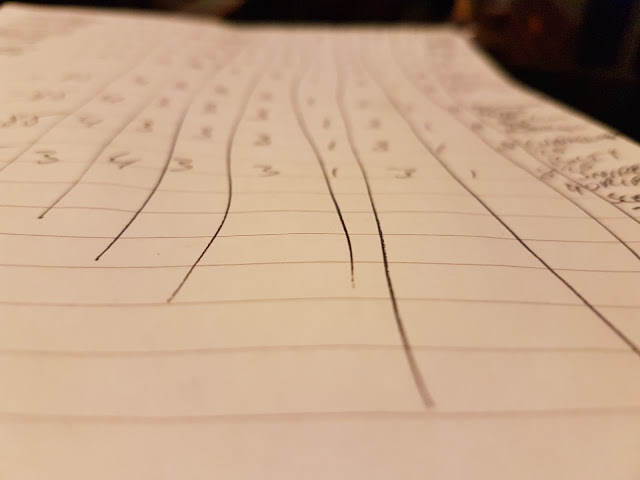 We squeezed in two games. The first was a fairly standard loot grab type scenario with the added twist that the ground was a bit slippy and their may be a random monster to eat folk. Slippy schmiipy says I and promptly lost two figures on the first move as they went down. One died and the other spent the rest of the game crawling 2" a turn until he was eaten by the monster. That's right, they slipped and were treated like they had received a nasty gun shot wound for the rest of the game! Already we were discussing our first piece of house ruling 10 minutes in. 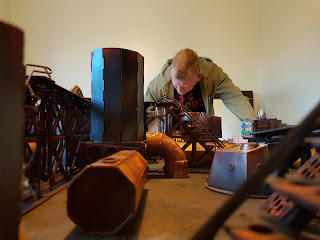 After that there was lots of shooting, some injuries, a single death (I think) and by the time Antipixi failed a bottle test we both had three loot counters each. 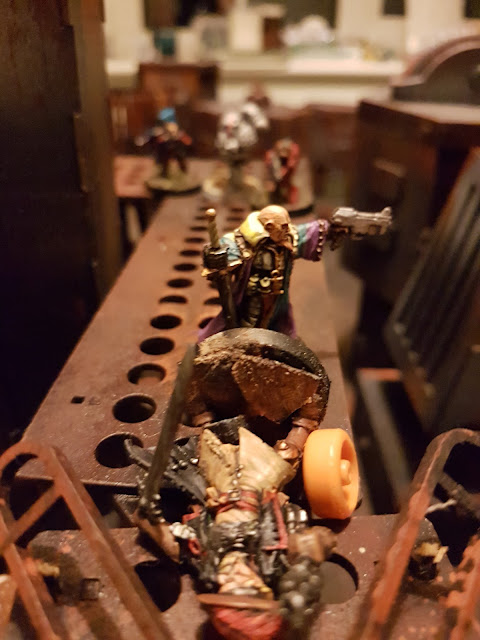 The second game involved a cut down portion of my team attempt to attack the base of the enemy and assassinate their boss while they had reinforcements arrive randomly from around the table. This game did not go well for me as most of my team were neutralised fairly rapidly, leaving my crusader to defend his boss from an onrush of baddies. There was a fair bit of falling and shooting but it all went they way of Antipixi in the end.

But then it should have been.

Cos this is the sort of game we've been playing for years.

We all know that SWA is just a repackaging of the Necromunda rules with a different post game sequence added.

I don't know about you (obviously) but using Necromunda to play games set outside the confines of the games background has been common practice for as long as I've been wanting to play those sorts of games. Necromunda is my number to go to set of rules, after RT, as it's an easy one to remember and the vast majority of folks that I game with have played it so know the routine. It's essentially 2nd Ed with a bolted on campaign (which is essentially the same mechanics as Gorka Morka as well). I originally started by using the Black Codex to work out points (multiply by 10!). And that works pretty well if you are looking to point up a little force. But then, why would you need points? Just through stuff down on the table and make up a story. That's what it's all about isn't it? 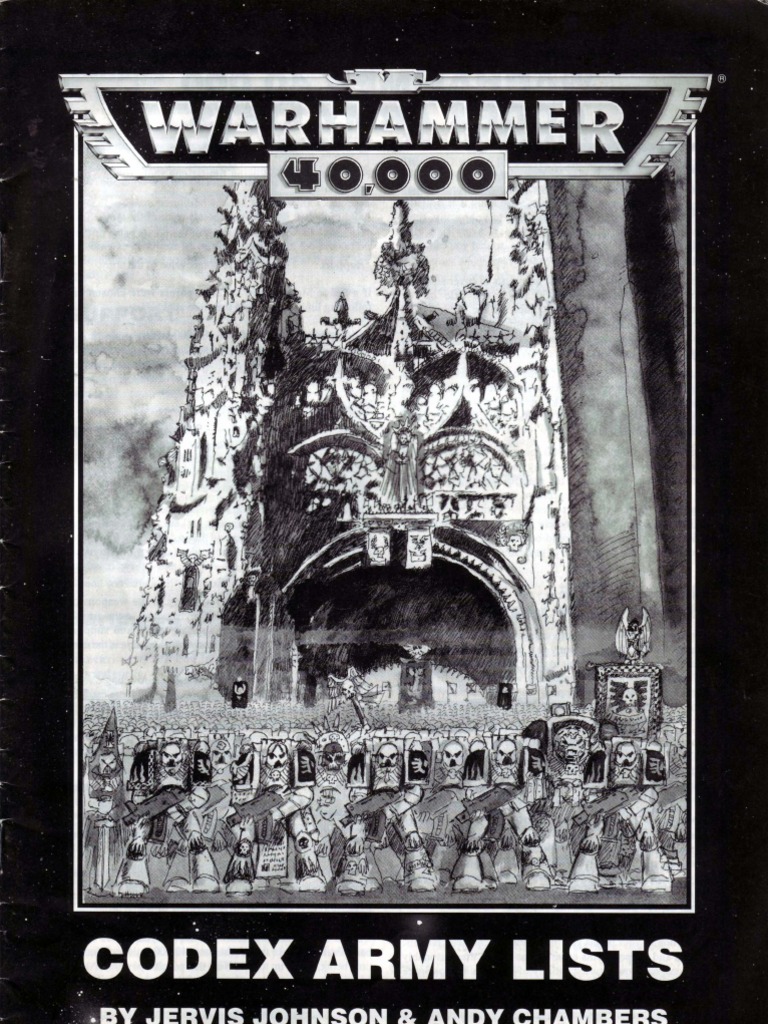 So as such, are we just paying GW to sell us back our own idea? Are they ruthlessly plundering out wallets to sell us a set rules that we've been using for years just so that we can now 'officially' play the game again? The bastards!

Well, in a word, no. As much as we imagine GW to be this lithe corporate beast, they just aren't that clever. I don't think anyone at GW had any idea that repackaging a 22 year old ruleset, an 18 year old sprue of ork boys and a 10 year old sprue of Space Marine scouts with some new scenery would go down as well as it did. They probably just thought it was a good way to shift the scenery sets -
" Hey, we've got these great new industrial bits of scenery, waddaya think?"
" I think we're going to sell half a dozen, their really expensive!"
" Well, erm, we could.....put in some old figures and some rules and sell it as a game?"
" That sounds fair enough but what are you going to use for rules?"
" Erm...we could just re-use one of the old sets...like...er...Necromunda?"
" Cool, get it done!"

And that is probably how much though went into it. GW is divided up into different sections and they all produce product in different ways and SWA didn't come out of the specialist games section like you'd expect but out of another one that is responsible for recent releases like Lost Patrol and Gangs of Commoragh. I expect that the powers that be were expecting a similar level of sales to those, maybe an added few due to the new scenery, but that's about it. This would explain why the boxed set sold out so bloody quickly. They weren't expecting people to be that interested. Boy were they wrong about that one.
The thing is, it shouldn't have been that hard to figure out. You've got members of staff who still use Necromunda or it's expanded fan version Inquisimunda to play games of a narrative nature and they are playing them cos it's a robust and popular ruleset. It's grown beyond the original and become a kind of evolved beat beyond the control of it's creators. The newly packaged game won't really change anything about the way I play, what it will do is give me free reign to play the kinds of games i've always played in a GW store (if I chose to) or perhaps even at Warhammer world itself (i'm already booked in). I'll see you there, with a big silly grin on my face and a 30 year old figure on the board. Cheers.
Oldhammer Other games Scavvies