As you might have seen if you read the Scale creep blog, this years Summer Wipster and Friends game at BOYL17 is going to be based on the Eternal Champion series by Michael Moorcock. I'm not going to repeat myself so if yo haven't read the idea over you go and read that first. The rest of us will still be here when you get back.


What i need to decide first of all is what rules i'm going to use. I could use Dragon Rampant and count each of the Champions as a single model unit against a variety of multiple model units but I reckon that won't give the kind of heroic adventuring that we're after in this game. I could go down the WFRP or even RQ route as seen in the game that Erny ran recently but as we are likely to be running this game early on the saturday morning I think over complicating things would be a bad idea. I'm going to stick with Warhammer Fantasy Battle for just now. If I have any ideas to the contrary I'll have to revisit my thinking. I'm going to probably go for 2nd edition as I like it's relative simplicity and just tailor it to the games needs.

The issue now is to try to represent the various versions of the Eternal Champion on the table top. Handily the 1986 spring Journal gave us stats and special rules for the figures form the boxed set. This gives me a a really nice starting point. 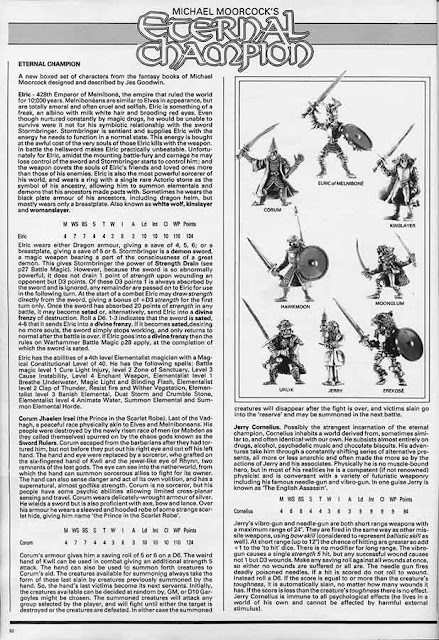 The main challenge here is making these characters powerful without the impossibility of being defeated. I want there to be peril. There should be the chance of them being hurt. They have ST and T of 4 for the most part which i'm fairly happy with so I'll leave that. My issue is the WS and BS that they have been given. A WS of 7 means that the champion needs a 3 to hit a normal human. Thats fair enough. The issue is that any normal human attempting to hit back needs a 7! (or 6 followed by a 4+). Now of course I could use the to hit table from 4th edition onwards but that means lowering the chance to be hit down to a 5 which seems to low. The way around this is to reduce the WS stat down to 6. This doesn't effect the Champions chance of hitting but means that he could be hit on 6's. This is a bit more balanced form my point of view and means that some wounds might actually be taken from the wonder warriors before they reach their objective.
A BS of 7 doesn't really have much of an effect on the game except that Jerry Cornelius and Hawkmoon both have missile weapons and a 7 means that can't actually miss! I think lowering that stat will have be done just for game plays sake. 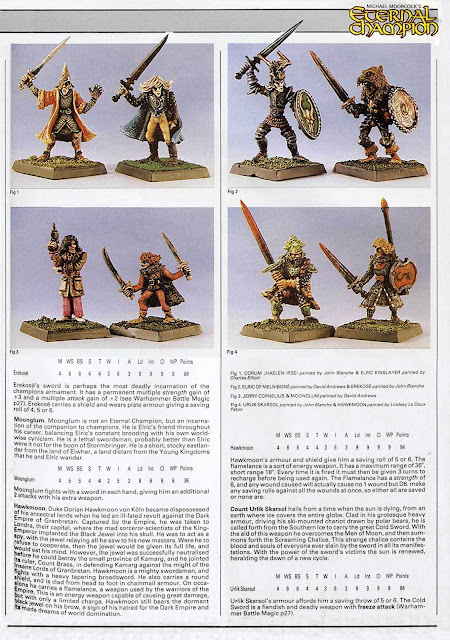 As for special rules, Elric's sword can use strength points to add to his attacks. Fair enough. It can either stop working when it gets to 20 points or Elric evan become Frenzied. Should be interesting.

Corum can resurrect the last enemy he killed to fight for him (Asslessman has baggsied Corum and has in fact already painted him up!)

Jerry has a couple of cool guns that either wobble people to death or poison them.

Moonglum has two swords so gets an extra attack

All of these seem fairly straightforward and should make the game pretty interesting. I just need to come up with similar fun special rules for the other incarnations that people come up with. I might note them down on cards for the game so that people remember.

Citadel didn't just do the boxed set of Eternal champions but they did a fair amount of enemies for them as well. Both the Melniboneans and the Pan Tangians would be enemies of Elric and Moonglum  (Elric didn't like his own kind much) so these could be possibilities to use as enemies for the game (the question of endless buckets of money in order to collect these figures must also be brought up here, something which I don't have but hey ho). As the Melniboneans are essentially elves (some of the figures got rolled into the Elf ranges after Moorcock and GW fell out and the they lost the license)  it makes sense to look at the elf stats to use for them. This gives them a fairly standard stat line and they would be pretty useful in the game. Thematically though the 'Sailor on the seas of fate' story takes place on planes of reality that aren't necessarily Elric's. That combined with the fact that the Melniboneans rarely let their islands means that they might not fit the game. Something to consider though.

Most of the Enemies that Elric and his other passengers are called to fight are described as men so it would make sense that we look at using these as the basis for what ever they need to fight.

The thing is, they are there at the behest of the universe in order to keep the balance between Law and Chaos so we need to consider that Chaos (or Law) has sent some of it's finest warriors to this mysterious place in order to fulfil the nefarious scheme that Elric and friends are there to defeat (if you get my drift).

This means that we need to look at putting something a little bit difficult in our heroes way.

Now obviously the idea of Chaos in the Eternal Champion Mythos is different to the version cooked up by GW but the very notion of warriors fighting for chaos is very relevant. Elric himself is a servant of chaos and the whole of the Pan Tangian culture worships a variety of chaos gods. If I had the money I'd be putting an army of Pan Tangians and there tigers on the field but I simply don't and going back to my previous point, they are solely from Elric's home plane of existence and thematically don't really fit.

Elric see's the armour of the warriors he sees while on the shape as foreign and unrecognisable so I'm as well steering clear of obvious Elricisms anyway.

That doesn't mean we have to avoid looking at Chaos for stats though.

Your basic Chaos foot soldier is the Chaos Thug and he is a better fighter than you average human but still gets killed just as quick. The next level up, the Marauder might be just the thing we're looking for however. An extra attack, and extra wound and nearly as good at fighting as some of the eternal champions means that they won't be a complete pushover. Something to consider (what with my load of painted chaos Marauders as well!) 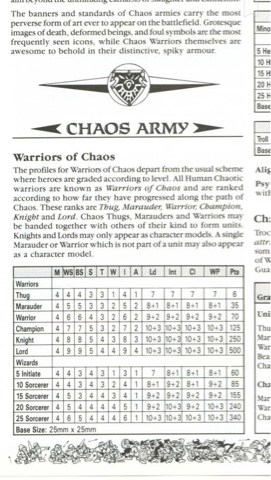 What we also have to consider is that the magic in the Eternal Champion universe is different to what you have come to expect in the Warhammer world. In Moorcocks universe sorcerers have the power to summon elementals and demons to do their bidding and it these entities that do the business. Now as you'd expect I'm going to have at least one sorcerer attempting to stop our heroes and they will be summoning what they can in order to stick the boot in. Obviously the first place to look for all our elemental needs would be the C34 citadel range.

These guys will make the Champions day a lot more difficult and will add a bit of flavour and danger to proceedings. I've got a couple of the Elementals but I think my mission is to see what I can gather in demon form over the next couple of months. But that will be another post. In the mean time I'l leave you with another catalogue page showing you some of the Eternal Champion Characters that weren't in the boxed set. Some of these will appearing on table near you come summer 2017.