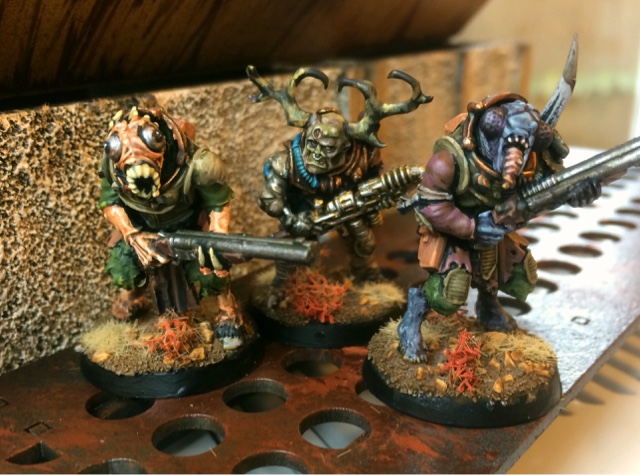 Chaos needs to have foot sloggers too. The idea that all Chaos forces are made up of Deamons, Traitor marines and Spawn is a bit sad. The real cloud and fun in a renegade war band is the mutant and beastmen. These are the lackey's that do all the dirty work, ensuring the plans of the champion come to fruition by blasting who ever is in the way. That great tome of Chaos, Slaves to Darkness has an entry in the 40K war bands followers table that I've been mulling over for years.

The standard answer is to kit bash some fantasy beastmen with cadian arms or something similar but I cracked open the neophytes set and went to town.

One bits box delve later I had three mutated space bad-asses ready to kick ass and chew your face off.

I then went for some realistic but yucky skin colours on them. Bzzzter got a mauve/blue, Fishface got a normal human skin tone (all the creepier with a face like that) and Grumblechops got a stinky rotten greenish tone.

I see these guys as a well armed special forces squad for a renegade (yet to make his appearance). They act as bodyguards or storm troops, basically the strong arm of the war band. I can use them as part of a war band in an RT game (in which case I may want to add a couple more to the squad) or as a faction in their own right in an Inquisitor game.

I'm pretty happy with the little freaks. Not bad for my first bunch of figures from 2017. Cheers.
Chaos army Rogue trader