Sometimes a bunch of figures sit in the Leadpile and wait patiently for you to remember that they exist. They hope in vain that the right project will come along and they'll be lifted from under their brethren and given the attention they have always craved. Sometimes, though, you just fancy painting something cos you want to. And thats what happened with these guys. They are from Lead Adventure miniatures and came to me via Oz, bizarrely enough. After doing my ww2 ruski's I remembered I had these guys sitting in a drawer and decided to dig them out and give them a thorough going over. Just another day long project where I push my luck with my wife's patience. The 10 figures are from two different packs, 'The Red Vultures' and 'Igor and the Red Gang'. They are essentially post apocalyptic communists and are full of cliches covering all the soviet bases. They have the distinctive padded clothing, the fur hats, the AK47's, red stars, CCCP on their armbands and ice picks (you know, Trotsky. Leon Trotsky. Killed with an ice pick. In Mexico. No? Read some history. A lot of them do have lovely round glasses like comrade Leon as well!) 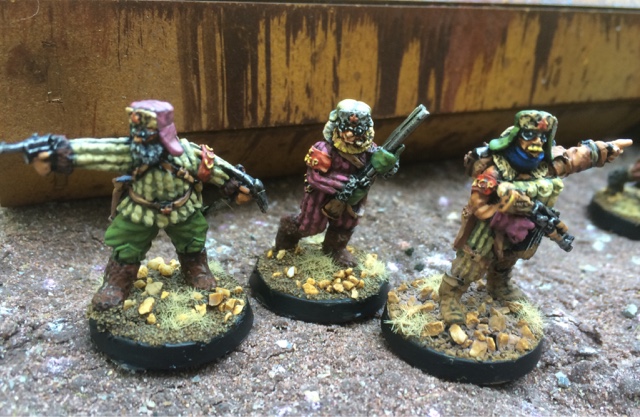 So there is no project in the offing for these guys, they are just a fun bunch to paint but.....they might t urn out to be quite useful. I've been pondering where they might fit in over the last day or so.

1. Rogue Trader - Obvious one to start with. You can never have enough heavily armed nut jobs for RT. If you think about all those squats armed with AK47's then the weaponry isn't too incongruous. These guys are just from some backwoods world where the only piece of surviving dark age technology was a box of stalinist propaganda.

2. Judge Dredd - There are several ways we could squeeze these guys into JD game. An east meg infiltration team working their way through the cursed earth. Survivors of the destruction of EastMeg1 fighting in it's ruins. A megacity1 CityDef group that have come out as Sov sympathisers.

3. Talking of 2000ad these guys could also be Volgans fighting against the ABC warriors, harbouring a criminal from the Strontium Dogs or facing Rogur Trooper on another distant planet. 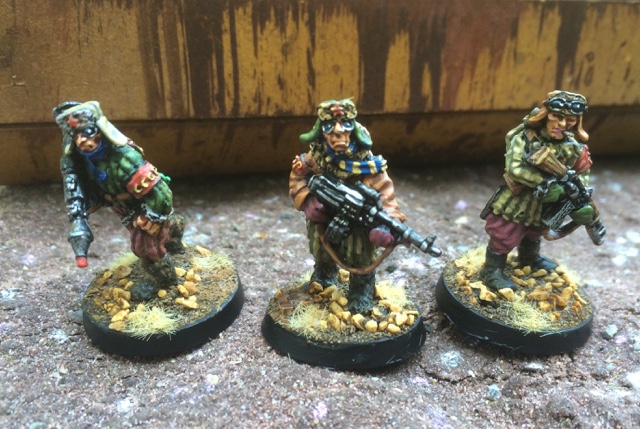 4. Paranoia - The computer has always warned you about sneaky Commies infiltrating into Alpha complex and hear they are in all their hairy, pinko glory. The computer wants you deal with them citizen, report to R&D immediately.

5. Black Ops - Every operative is going to faced with guards and enemy personnel that are going to mess with their missions. These guys have been guarding soviet secrets in the middle Jazwiristan for a long time. What could they be hiding?

6. Rogue Stars - Osprey's forthcoming sci-fi skirmish set looks ideal for small scale combat between groups of figures on a small board. They don'y have to space age looking do they? 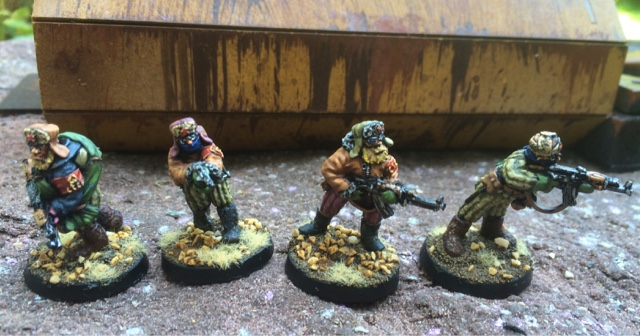 That's quite a few to be getting on with. How about you? Any suggestions of games where these guys might be useful?