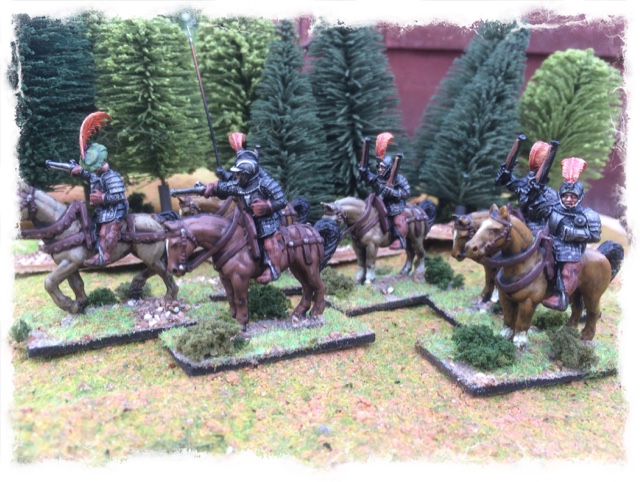 I said that I wanted to get some cavalry done for both sides of my Dutch Revolt armies (they aren't armies yet really, Forces? Units? Companies? Factions? whats the correct nomenclature?) and here are the first lot. A unit a German protestant Reiters.

'Wait a minute!' I here you say, 'You're having us on! Those are nothing but citadel Empire Pistoliers as sculpted by the Perry twins! What are you trying to pull?'

Well, just hang on a minute there. You are right. These aren't historical miniatures at all but they are pretty much spot on for the figures I wish to emulate. 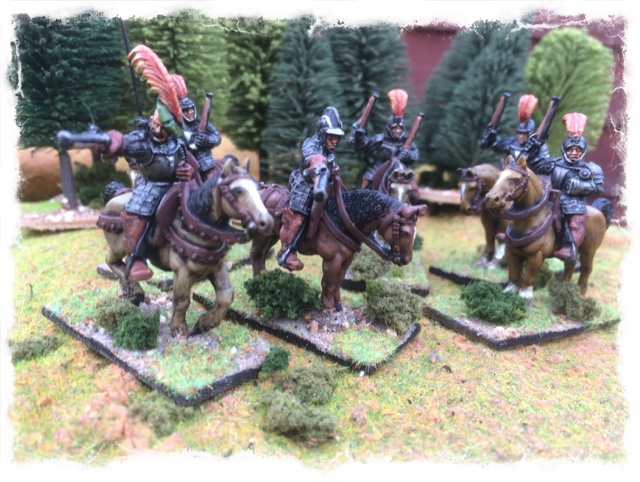 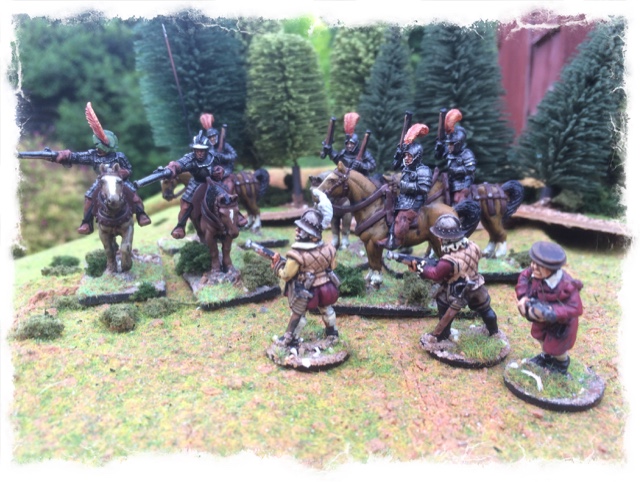 During the late 16th Century various wars erupted that could be linked to religious differences (as well as the normal political meddlings that usually caused these things). As well as the Dutch Revolt which I've been painting figures for, there was also the French Wars of Religion (wars, plural, depending on how you number them there was anywhere between 7 and 12 of them). As there were no such thing as standing armies at the time, forces had to made up of whatever troops you could muster form your supporters and their tenants or other political allies. The French Royalists/ Catholics could rely on some members of the royal household and retainers, the Swiss regiments that were loyal to the crown and maybe some of the organised 'Legions'. The Rebels/Protestants could gather large numbers of poorer horse and regiments of foot. In the Netherlands there was and even more acute problem for the Orangists as the population of the country was comparatively low, they could call on the Sea beggars and some town militia but all they really had for horse was a small amount of nobles and there retainers. The Spanish had to bring there armies all the way from Italy on foot so they were limited by the terrain and supply issues.

The easiest way to solve all these issues was to hire mercenary regiments and the largest area to recruit from was the Holy Roman Empire (today's Germany, mostly). Commanders could send out contracts to Captains for a set number of foot (the infamous Landsknects - think old school Empire army - all slash and puff and bright colours. By this time famous for their ridiculous Pluderhose) and a set number of cavalry. 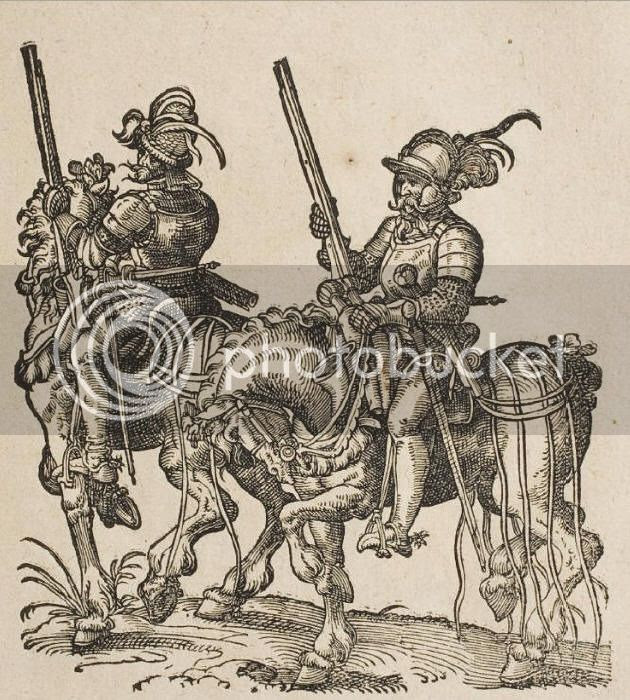 This cavalry was pistol armed wore, for the most part, a munitions grade armour that mass produced in Germany. It was called a 3/4 armour as the lower leg plates were left off in favour of strong riding boots. The most popular helmet was a Burgonet though Morions were worn as well. Although these were the most common armours generally the trooper would pay for them out of their pay so in essence if they brought their own armour there was no need to be supplied with any. This meant that some units would have a variety of armours within it's troopers. The armour was usually painted black which was a cheap way of ensuring that the steel was kept as tarnish free as possible (not always possible in wet climate like the north of europe) hence their name, Schwarzreiters (Black Riders). Whatever their armour, the Reiters were universally armed with a number of heavy pistols, often as many as three, as well as a sword and occasionally a cavalry carbine.

There was two different tactics used throughout the period and they often depended on the quality of the troopers and the person leading them. One method was to charge at the enemy and discharge their pistols at close range before entering combat with their other pistols, swords and the heavy butts of used pistols.

The other method was called the 'Caracole' and was similar to the system that foot used. Troopers would trot towards the enemy and fire their pistols and then wheel to one side to allow the following rank to fire and repeat. The idea being that a steady rate of fire could be poured into enemy foot, softening them up before the charge. Obviously a great deal of training and steadiness was needed to carry out this maneuver and a sudden charge while carrying it out could be disastrous. 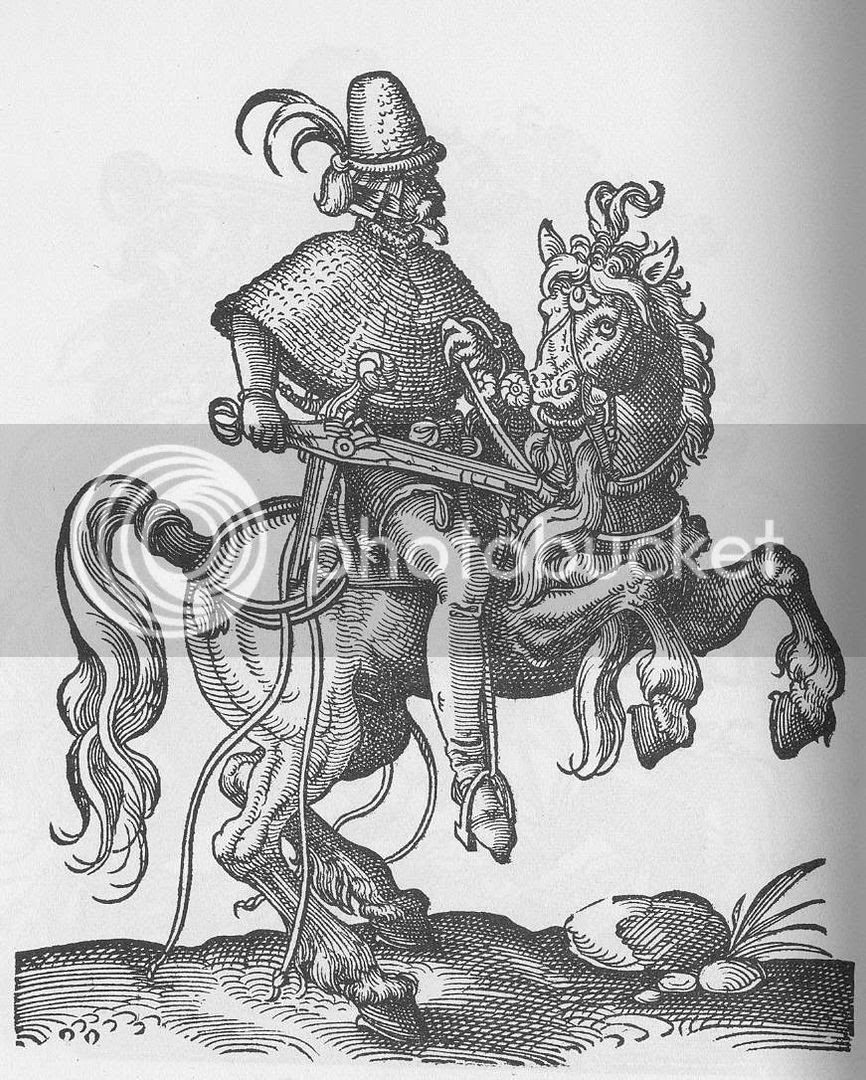 Whatever the tactics, the Reiters were deployed in large, dense blocks rather than the thin lines that Lance armed cavalry tended towards. Reiter cavalry units could be 10-15 ranks deep and 30-40 wide. They were hired in their thousands, 3000-4000 not being an unusual number.

So, that gives you a pretty good idea of the kind of cavalry that would be hired by the Dutch during the early years of the revolt. And when you compare the above illustrations to the ones that appeared in the 4th Edition Warhammer Empire Army Book (John Blanche I believe), then you can see where the concept came from. Combine this with the Perry brothers love of Historical miniatures (all the way from their Medievals and Elizabethans (now sold by foundry) to there current own ranges) and you'll see why the Empire Pistoliers are probably the best choice around for representing Rieters. 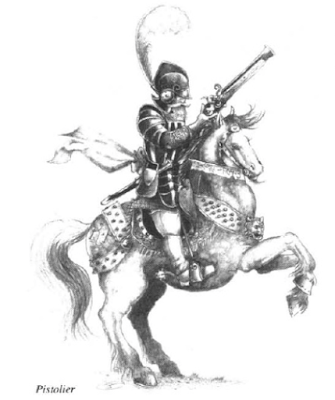 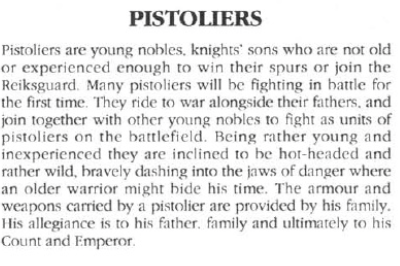 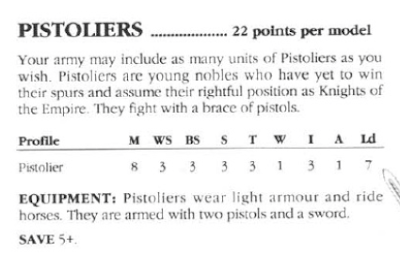 Here is where I have to pick up on GW's veering from historical accuracy because in the Warhammer world, Pistoliers tend to run about in little units and act all light cavalry and stuff. This role was important but would have been taken up by Mounted Arquebusiers,  Border Horse or even occasionally Stradiots (quite a few served in the Spanish army of Flanders and some even made it as far as serving in the English army in Scotland apparently!). Rieters were not true heavy cavalry but were a cheap alternative, they were used en masse in set piece battles and in smaller units during actions throughout the Netherlands. When the winds of time get round to allowing me the time to paint up an Empire army I fully intend to use them as history intended. Cos I'm stubborn like that!
Dutch Revolt Oldhammer