October 17, 2014
Last night I played host to Snicket and we played a game of the new osprey medieval rules, Lion Rampant. 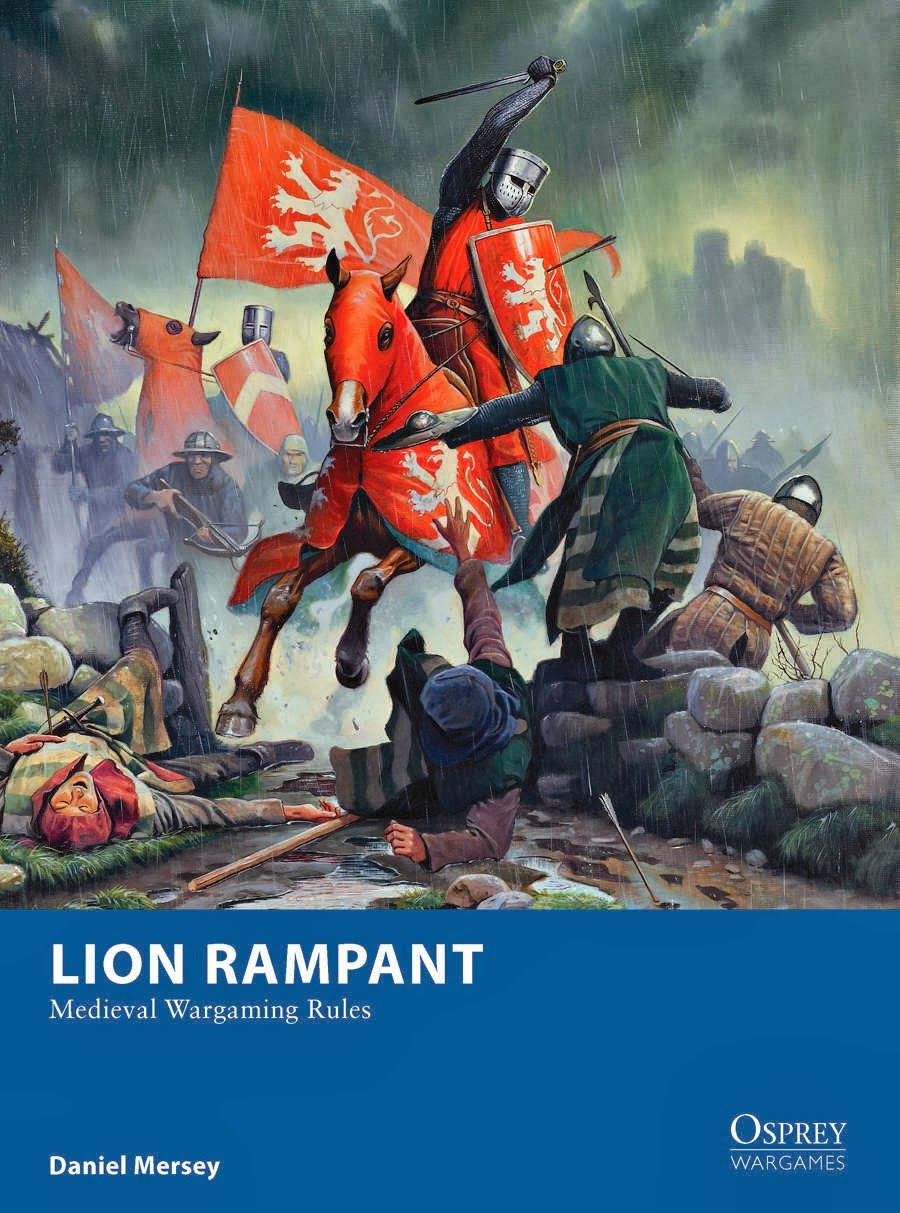 Having managed to sort out some units of figures for us to choose from we went for the recommended 24 point retinues and ended up choosing identical sets consisting of a unit of mounted men at arms (containing our leaders), a unit of expert foot serjeants (halberds), a unit of normal foot serjeants (spear), a unit of crossbow and a unit of archers. The men at arms are six figures strong and all the rest are all 12 figures. Unlike warhammer there is no need to rank them up (which we kept doing out of habit!) unless they are using a formation like schiltron that serjeants can use. The units can move in blobs with figures all with 3" of a central figure.

We rolled for a scenario from the book and got 'Defending the Indefensible'. One retinue were defending and object (in this case a siege cannon) placed in the middle of the table and the other retinue were trying to smash it. All the attackers had to do was get a single figure in contact with the cannon and they win. 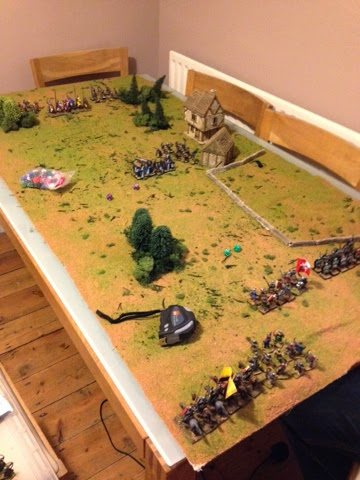 We rolled for attacker/defender and Snicket got to attack while I got to place up to 10 points of my force around the cannon and the rest at the table edge. Snicket set his retinue up at the opposite table edge. 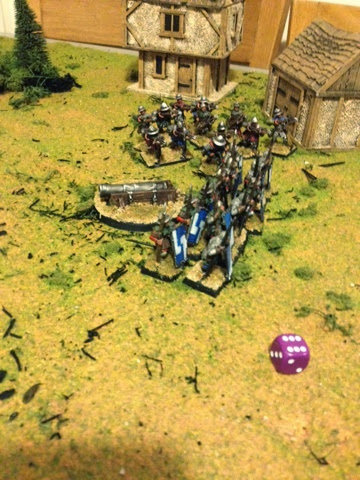 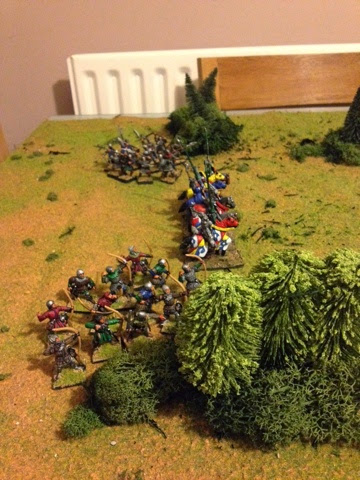 And the rest of my force moved on from the table edge. 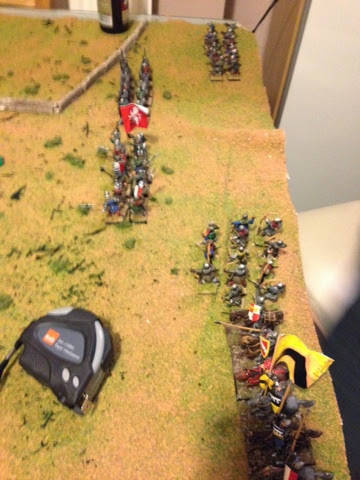 The round works by giving each player a choice of orders to give to which ever unit he wishes to activate, he rolls against the units value for that order on two dice and if you roll above then they move, shoot, attack, whichever you wanted to do. If you fail to activate a unit then the turn moves to the opponent. A nice little mechanic that adds tension to the game. 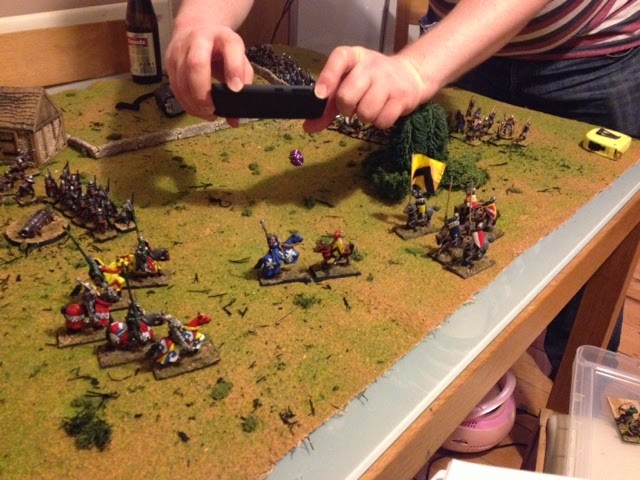 The two units of men at arms quickly moved into range of each other and the first action of the game turned out to be a challenge called by Snickets leader. 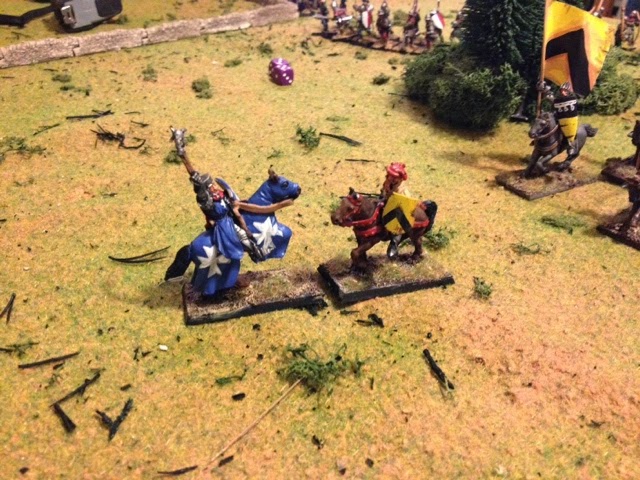 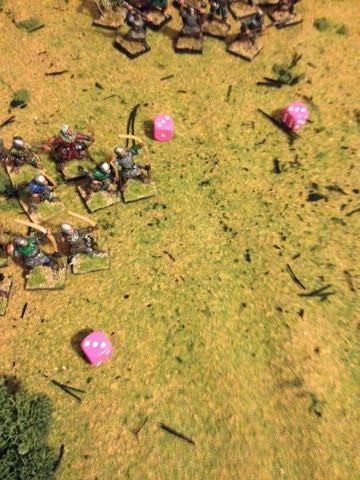 I scored no hits, 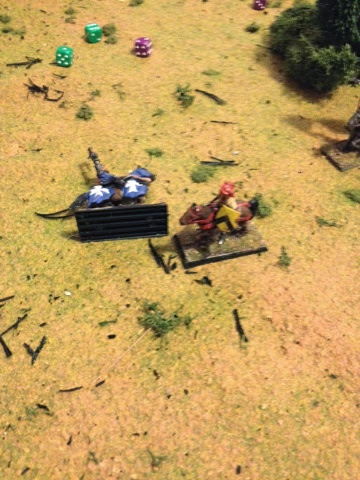 but Snicket scored enough to kill my leader... 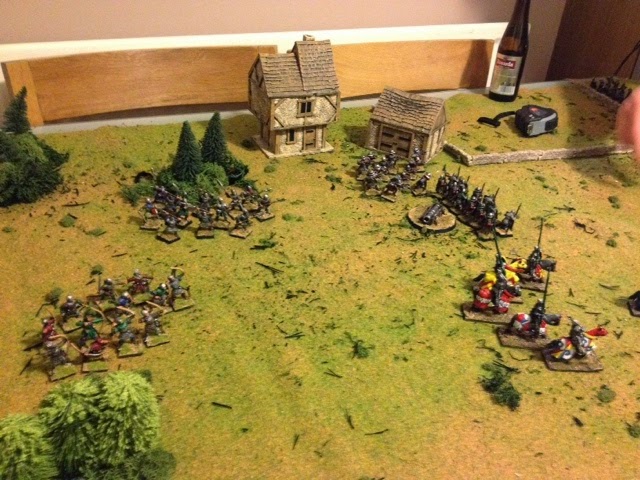 Meaning that all my retinue had to test against their Courage value. 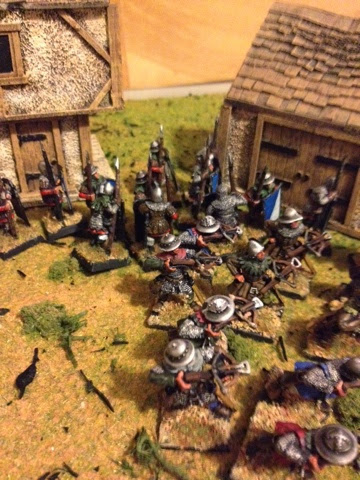 The Serjeants were the only ones to run! 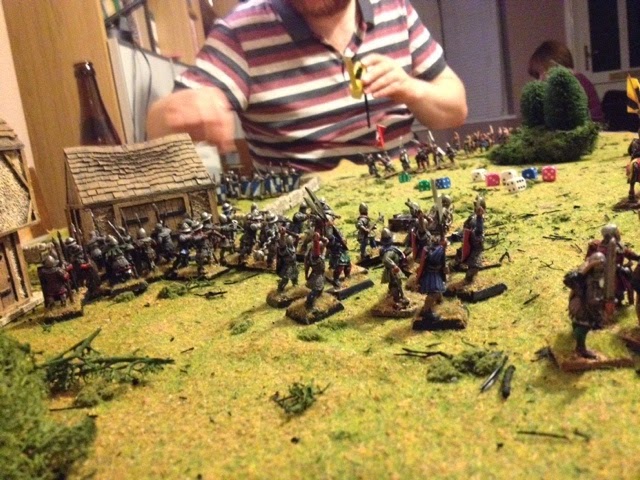 But by this time the Halberdiers and archers had arrived to boost the defence of the cannon. 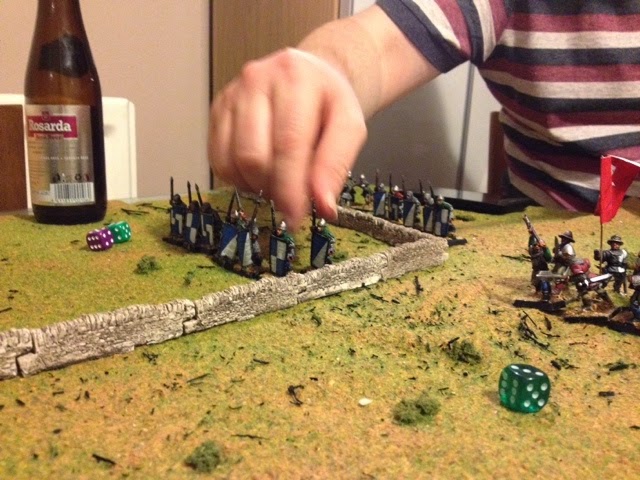 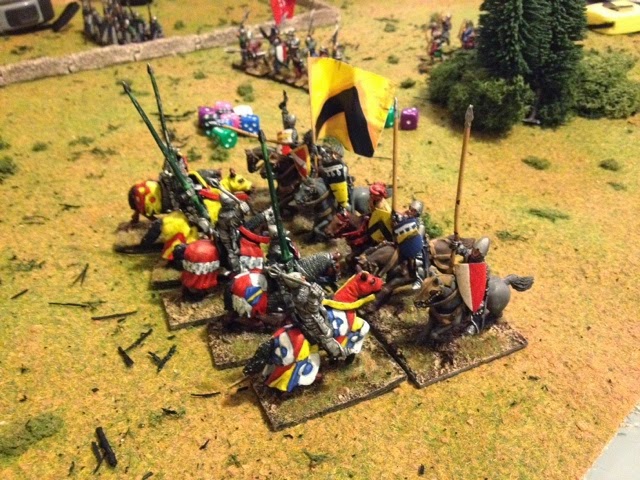 While the men at arms clashed repeatedly on the other side with little outcome, repeated charges and withdrawals whittled down the units but they passed their courage tests and kept stuck in the game. 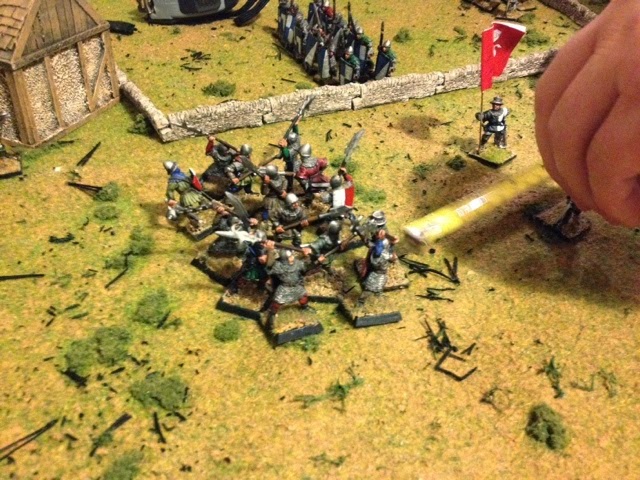 Snickets Halberdiers had advance up the centre under a hail of bolts from my crossbow and as soon as they were in range my unit launched an attack which sent them running back the way they had come. 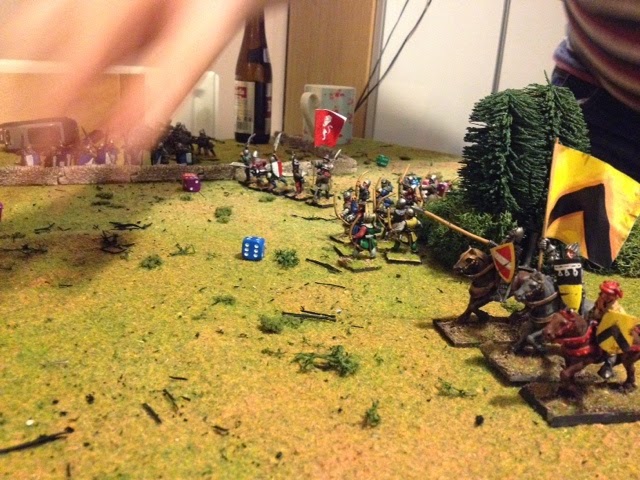 Because of the number of casualties they needed a 10+ to pass their courage test to rally which they failed to do repeatedly. 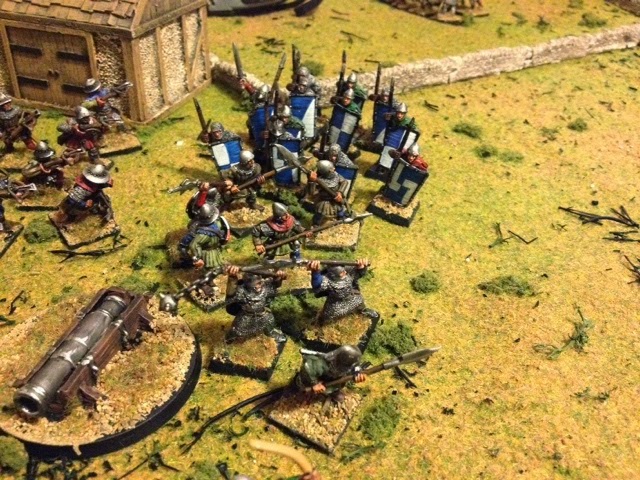 Snickets other serjeants then made their move but were chased off. 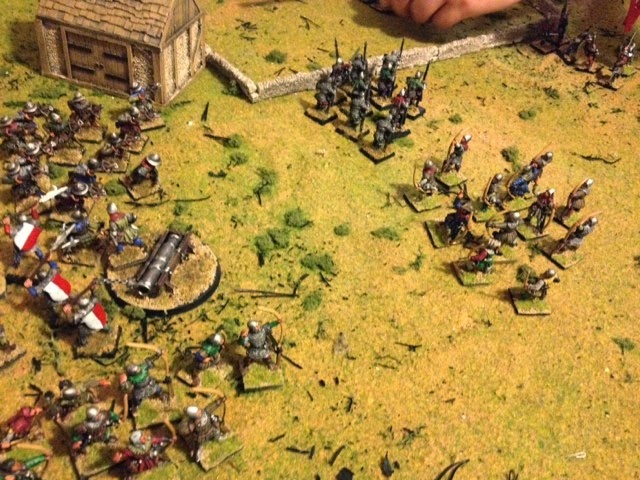 Only for the archers to chase the halberdiers off with a volley of arrows leaving the route to the cannon clear. 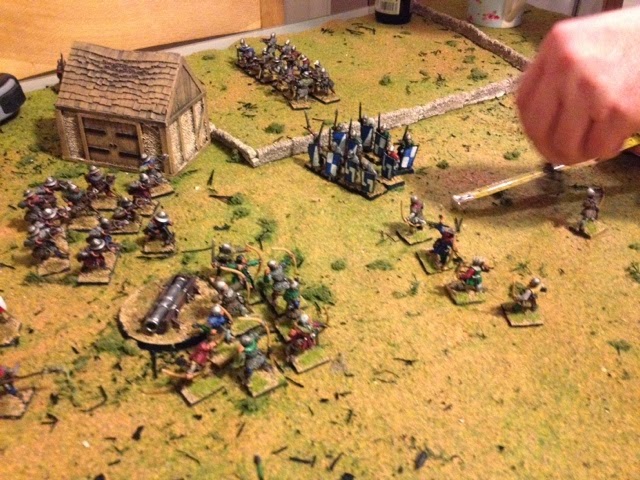 My archers heroically peppered the enemy with arrows and the crossbowmen joined in sending snickets archers scurrying away. 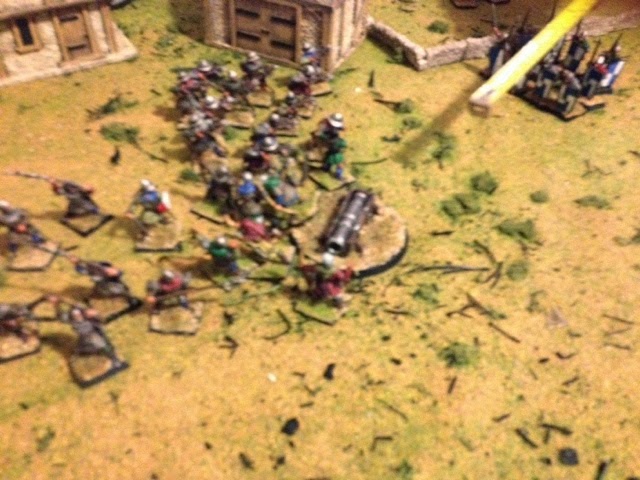 For some reason my archers failed a courage test as well (i think either they were charged by Snickets men at arms or they were hit by his crossbows), but they soon rallied. Snickets serjeants had rallied as well and moved back in to the fight. 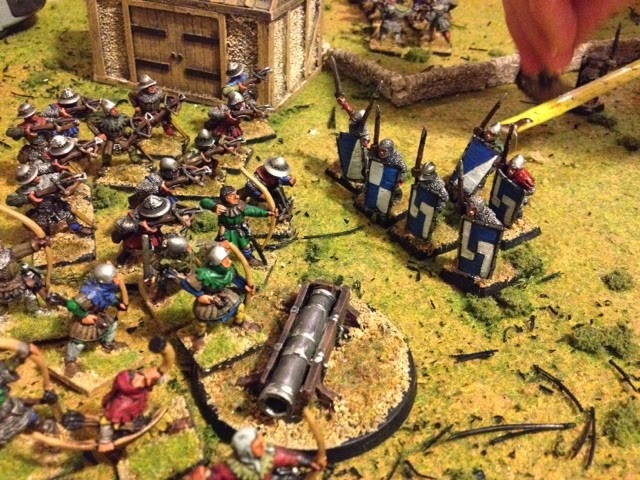 Again the serjeants were hit in the face by a storm of projectiles and only an inch form the objective failed their courage test and ran. 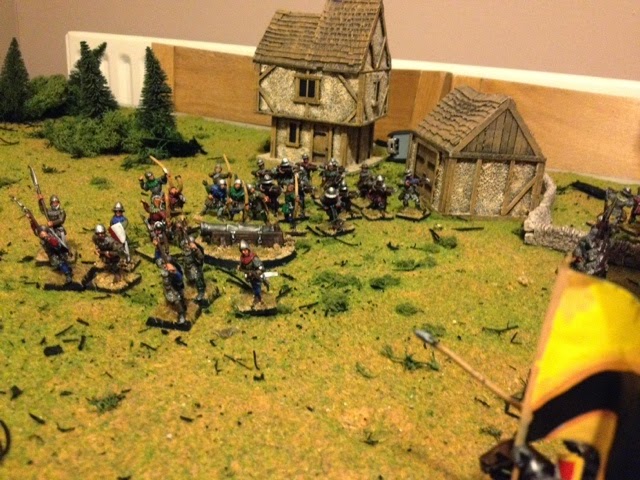 Howevet this left the situation where I had no unit in front of my objective and Snickets men at arms with a move of touching it and smashing it to pieces.

The game would be decided on whoever could activate their unit. Their followed a tense series of rolls where we both failed to get our units into action. My acrchers wouldn't move forward and risk being ridden down by the knights and Snickets horses were blown from all the charging around and needed convincing to make one last move. 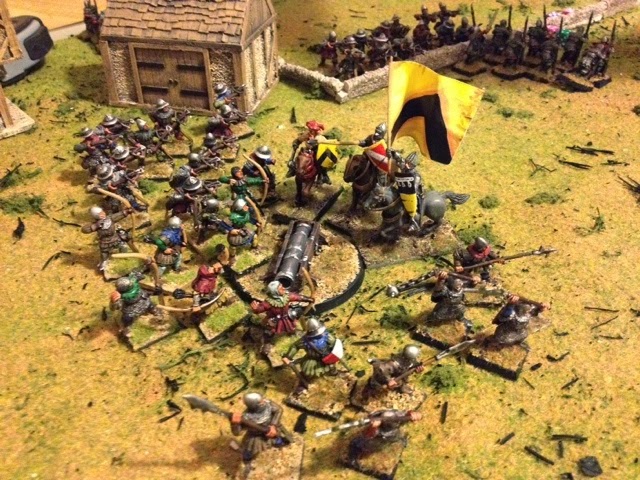 Fate decided that victory would go to Snicket and as he charged is victorious men at arms into the cannon it was all over bar the mopping up.

We were both really impressed by the rules. Once we got in to the sing of things they were easy and characterful. The retinues are just the right size for a smart little force without having to spend months working on them and the activation system lends a level of tension as you try and get your troops to do what you want them to. The moral system works really well, once a unit is down to half strength then their effectiveness is drastically affected. The game is a lot less bloody than things like warhammer meaning that casualties tend to be more of a trickle than a flood and this has the effect of keeping the units effective for longer but also gradually wearing units down rather than simply disappearing in a puff of smoke. We both agreed that we'd be playing it again. It seems to be really customisable so would suit lots of different games.  A really neat little set of rules that work well for a really pretty reasonable price.  Who'd have thunk it?
battle report Lion Rampant Medieval