In my opinion, this is one of the most influential books that were published during the reign of Rogue Trader. I reckon it may be as widely read as the rulebook itself if not more. I've seen it more in more people's collections than any of the other Rogue Trader era books (Compilation, the three Ork books, Siege, The two ROC books, Astronomican and Vehicle Manual) and looking at it today it has done more to shape the way 40k developed than any of the other publications. What makes this even more surprising is that it is not a coherent book like most of the others but instead, like it's sister publication, Compilation, a collection of articles form White Dwarf. I think the very act of collecting all these articles together are what makes them so influential. Would they have made such an impact if they had only ever appeared in the monthly mag? 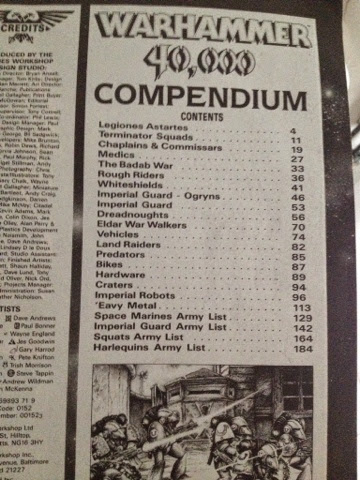 Warhammer 40,000 Compendium, to give it its full name, gathers 23 articles that had been published between issue 93 (October 87) and issue 112 (April 89 ) ( I could be wrong here, don't be afraid to tell me). The 200 page collection was released in 1989 and features, the classic Dave Andrews illustration 'And they shall have no fear', previously featured on the cover of WD 98, on the cover.

So whats in it?

Loads of stuff. Some of the more rules based articles like new vehicle rules, craters, new dreadnought building rules, rules for bikes etc are interesting curiosities but I wouldn't bother trying to use them in a game.

Rick Priestly's article on Space marines came to define the way these particular superbeings have been viewed ever since. Although a lot of the science behind the 'implants' is pure nonsense it's worth reading to get to see where the current warrior monk attitude developed from. 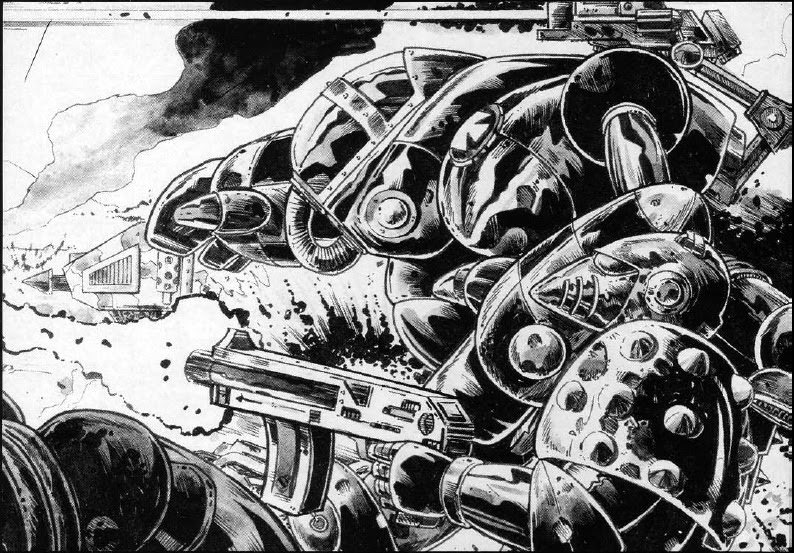 The Robot rules are an example of the hilariously complex ideas that were sometimes published. I seem to remember attempting to use these in a battle a long time ago and i'm pretty sure that was the only time. However the robots themselves were awesome models and the schemes that are suggested are lovely as well. 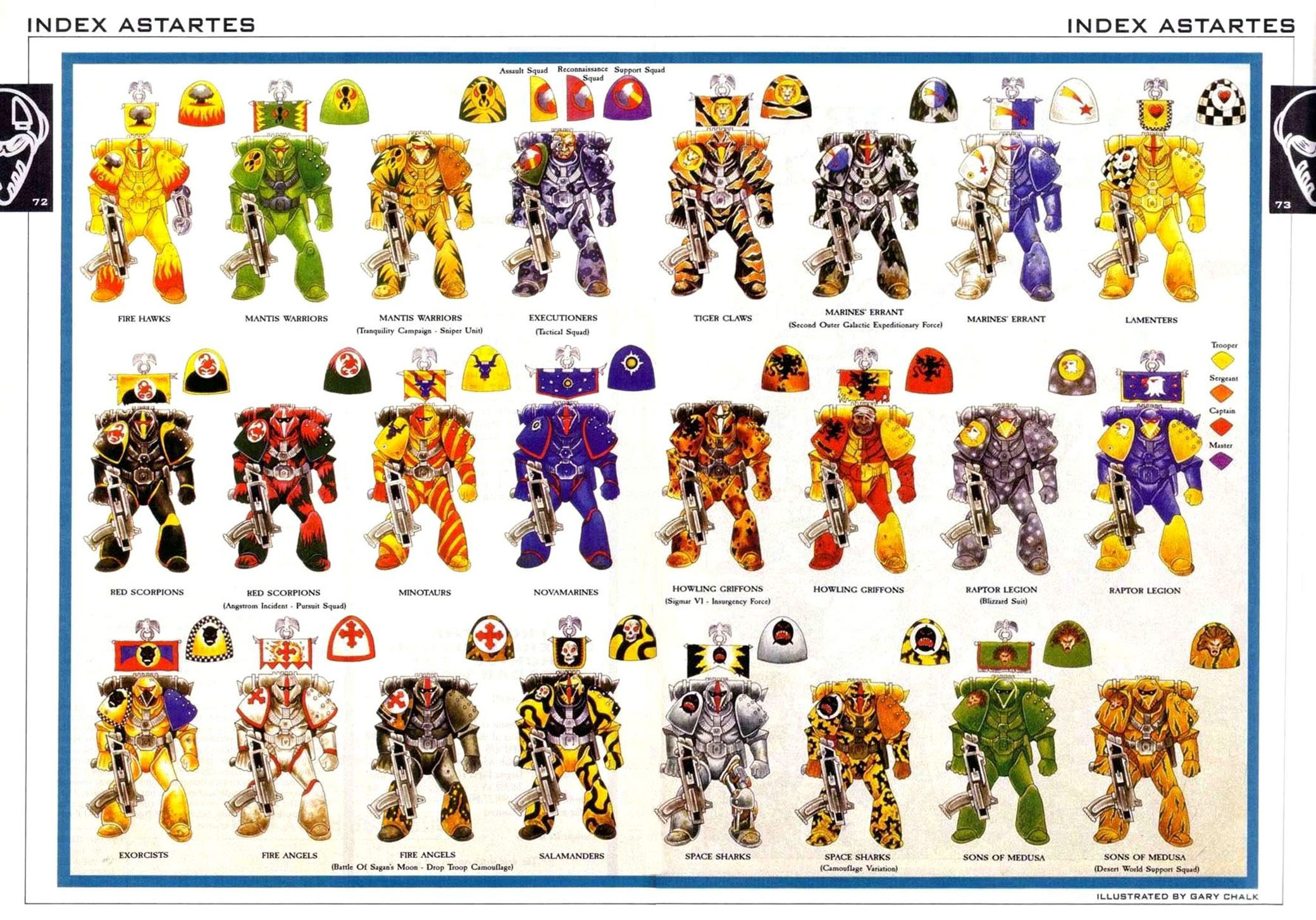 The Badab wars makes it's initial appearance in what is possibly a just an excuse to show lots of colour schemes for marines. Does make you wonder what came first, the designs for the chapters or the story? Space marine apothecaries and Imperial Guard medics are covered and rules given on how to use them on a battlefield. 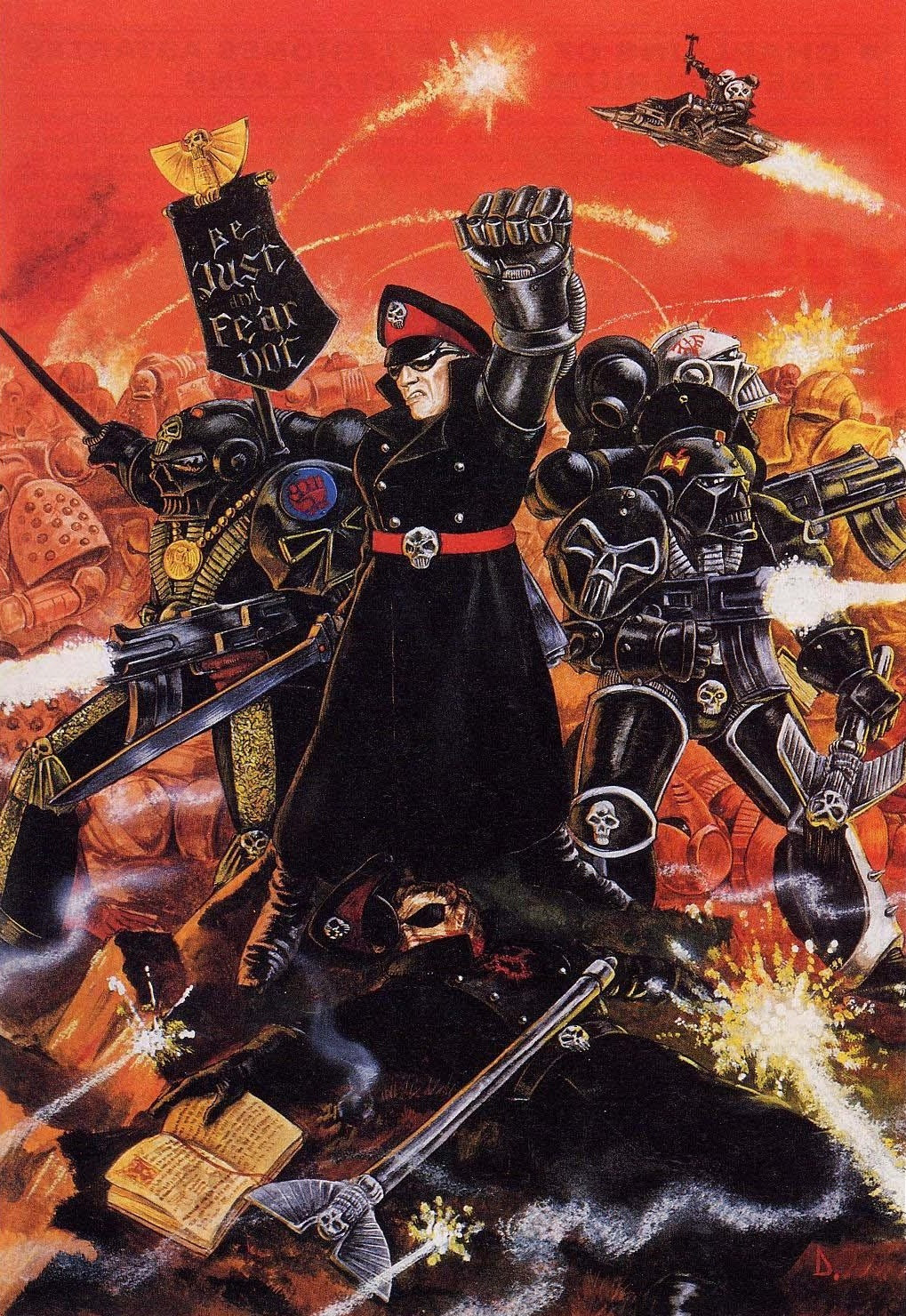 Chaplains and Commissars also make their first appearances and have gone on to be integral parts of the 40k universe.

Ogryns also enter imperial service in the form of classic Bob Olley sculpts and an article about how to combine them to your imperial force.
Land raiders, Land Speeders, Rhinos and Predators all make their first appearances (although the prototype land raider was featured in the rulebook) and are still hanging about 20 odd years later. Thudd guns, Rapiers, Tarantulas and Mole Mortars are featured as are Eldar Walkers and Ork dreadnoughts. Imperial Guard rough riders gallop into the universe and rookie guardsmen are added in the form of Whiteshields.

Some of the most significant articles fill up the back of the book however. The 4 army lists that are collected here were probably the most widely used list for playing Rogue Trader in the early days. The Space Marines list (with an addendum of terminators which came along a bit later when spacehulk introduced them) is fairly recognisable to today's gamer and was much more accessible to most than the one published in the book of the astronimican (both are from 1988 which is a bit odd in itself) not only in that it was easier to get a hold of but it was also easier to understand!

The Imperial guard and Squat army lists both came out to support the release of new ranges of figures. Both centred around a plastic box set of troops with accompanying metal figures (the era of the plastic arms had begun!) which eclipsed the slightly older ranges for both armies. The guard list is what you would expect, introducing platoons and therefore dramatically expanding the size and scope of what an army could be. The squat army list features bikers and exo-armoured nobles and is probably the pinnacle of the squats in 40K. The background fluff is a great read and makes you realise what a hole has been left in the heart of the 40k universe when they ripped the Squats story out. 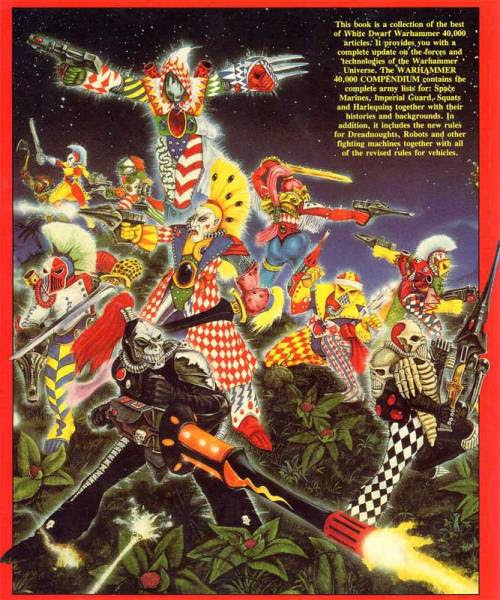 The back cover to the compendium shows the final army to be covered in the lists. This is the first Eldar list to be published in white dwarf (another one would be along in a year or so and there was one in astronomican) and focuses on the enigmatic Harlequins, a futuristic equivalent of elf wardancers. These colurful, pointy eared, space clowns were armed to the teeth and were hard as nails. This was reflected in their points cost, meaning you could have a decent army worth without shelling out huge amounts of money. Which was handy as there was a box set to go along with the army list. The only drawback was that they were bloody hard to paint what with all those checks and stripes and shiny faces and detail. Still I think they were popular, GW must have sold tons of them. I'm only saying that cos there a thousands of the buggers on ebay!

So there you have it. If you are looking for the place where 40k started look no further. In this collection of articles the mad little experiment that was Rogue Trader started to transform into the world dominating beast that we love and loathe today. It's all here in 'the Red One'.

I meant to include this in the article but completely forgot, I even found the image and everything. So forgive me.
However this goes against the grain of a lot of the articles in the compendium and revels in the oh-so british DIY punk ethic that the original Rogue trader is steeped in. This is the infamous article about making a vehicle out of a deodorant stick and some plastic spoons. Add in some spare Zoids bits (remember Zoids?) and hey presto the imperium has a deadly vehicle that can deal with any terrain. The RT rule book has loads of vehicle profiles that can be used in games and this tank is an example of how to create one of them on next to no budget. Every gamer that has ever scratch built a scifi monstrosity has this article to thank. God bless the Grav Tank!