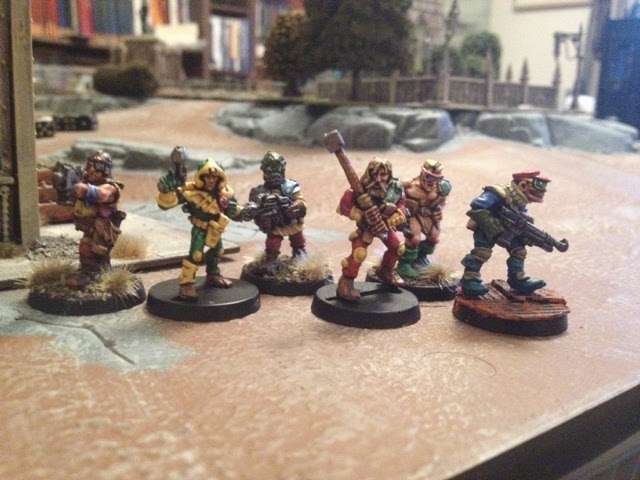 After a my Sons of Horus got a drubbing due to the unexpected presence of a vindicator on a 4x4 board with lots of troops we decided to have a quick and silly 4 way game using Rogue Trader. I let Mike and Kirsten pick their favourite half a dozen figures out of my case. I then picked my little crew above. 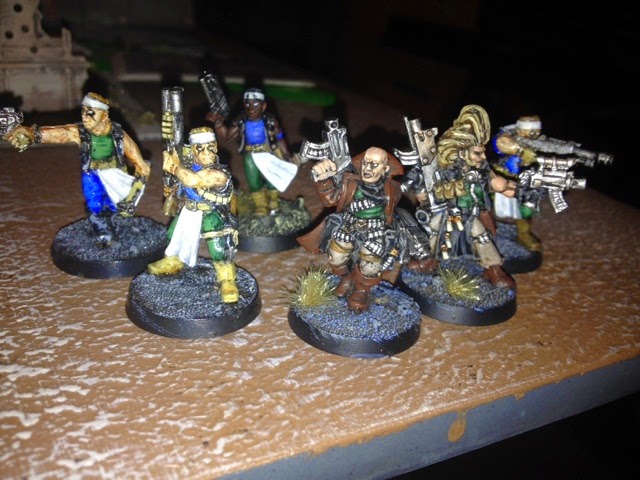 Linz took his orlocks with his twin bolter hit man that is fast becoming a personality on our little games. 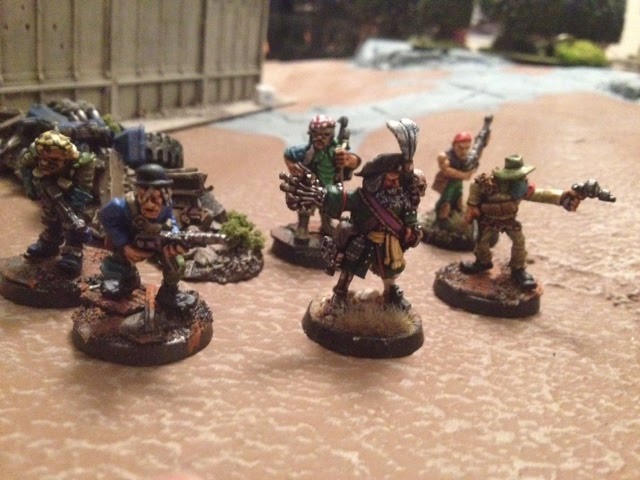 Mike took this bunch of pirates. 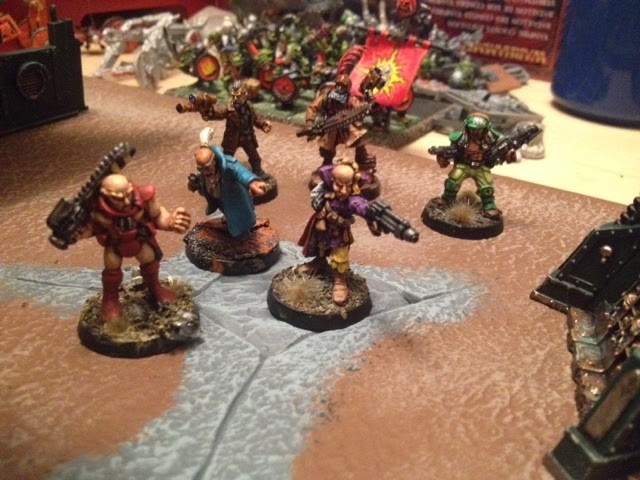 And Kirsten went for a Baldy alliance. 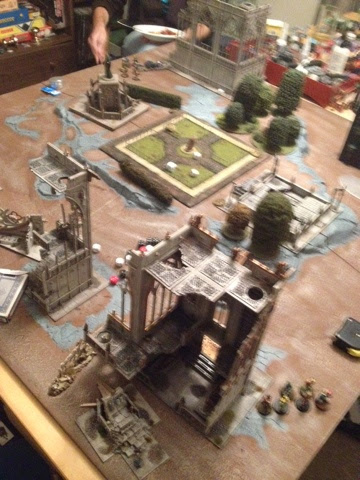 We played on four by four, there were 6 loot counters randomly placed around the centre of the board. We played with some playing cards that you can see in the above picture, so that we had random order in each round. 4 cards shuffled and dealt each round gives the order that players take their turn. Simple. 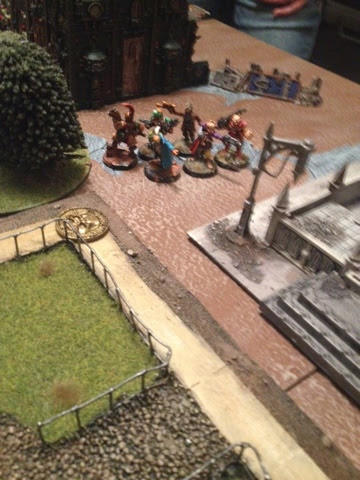 K's bunch made a run for the centre. 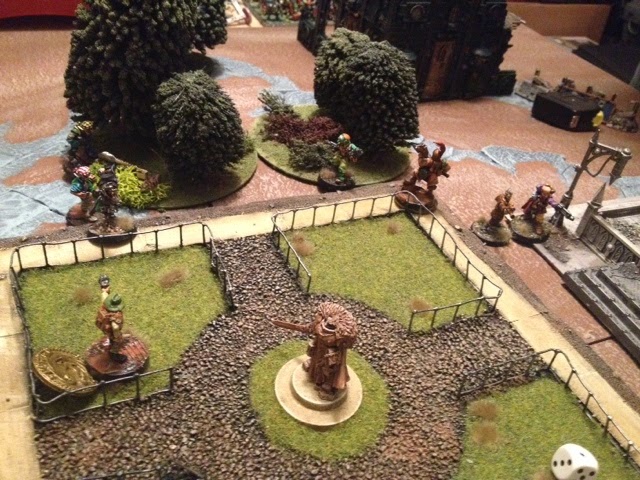 Only to run into M's pirates who were busy collecting loot. 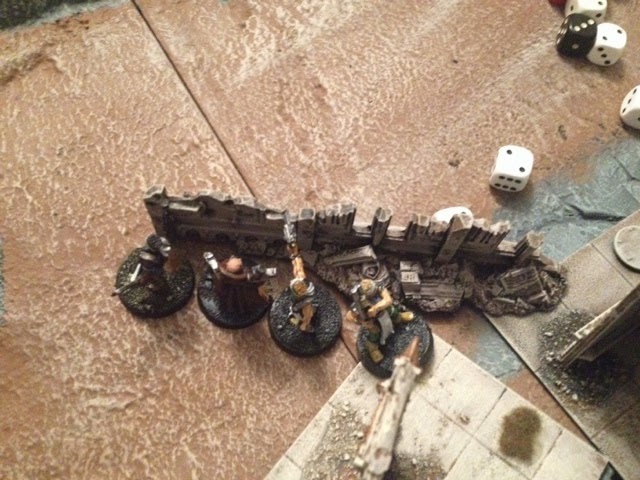 L's Orlocks decided to take it easy and let the others do the hard work and mop up the remains. 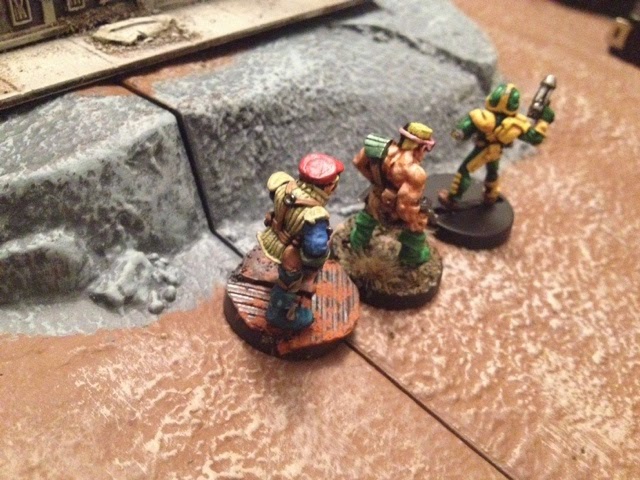 Johny Alpha led a couple of his lads round to intercept the baldies. 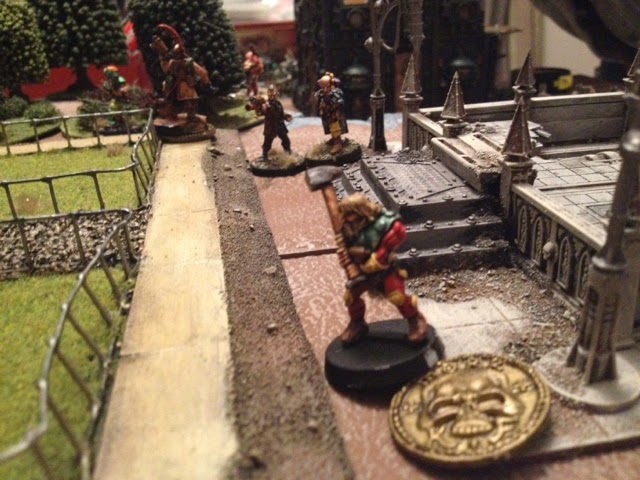 While Wulf went straight for the loot with support from the two more members of the team. Wulf shrugged off laser fire from the Baldies (two 6 up saves in a row!) 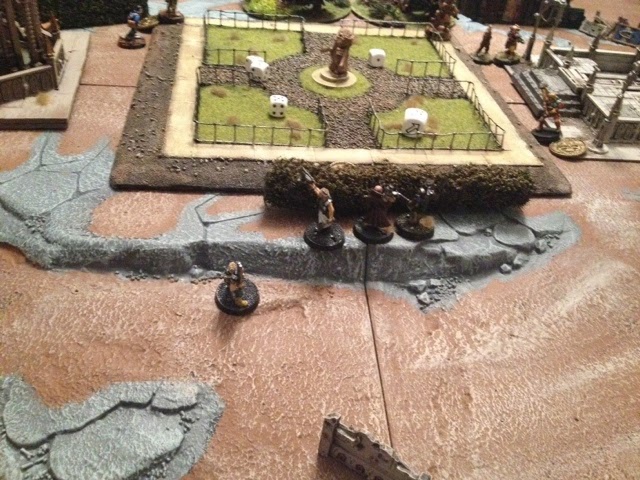 Only to be gunned down by the sneaky Orlocks as they moved up to the hedge in strength. 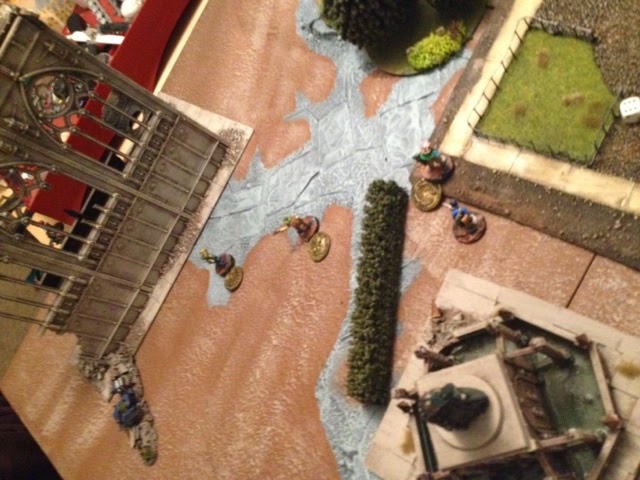 The pirates in the meantime were heading back to their corner with 3 loot counters. We agreed that their wasn't any safe zone, other teams could try and steal your loot if you didn't keep it safe! 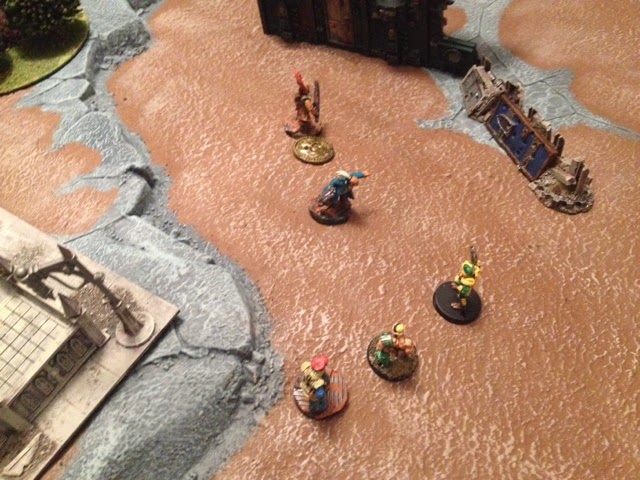 The baldies were trying to get back to their base with their loot but Johny Alpha had other plans. Shooting apparently wasn't part of the plan though as they all missed. 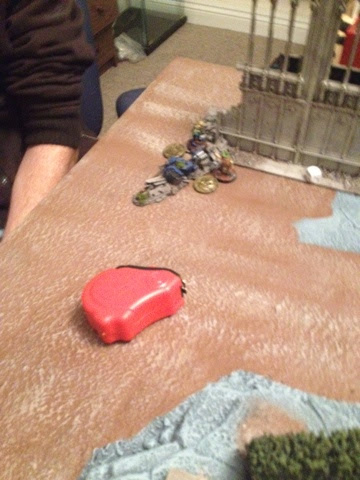 The pirates make it back. 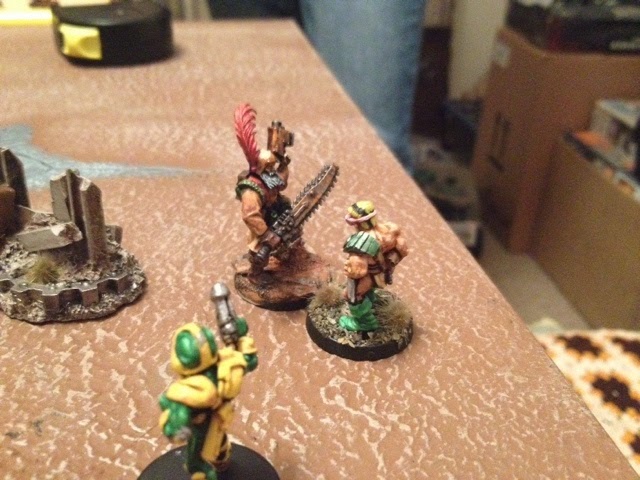 And the baldy enforcer (he is bald under the helmet!) charged one of Johny's team, despite the whirring death of his chainsword neither landed a wound in the first round. The enforcer crumpled to the ground in the next while Johny blasted the baldies boss. 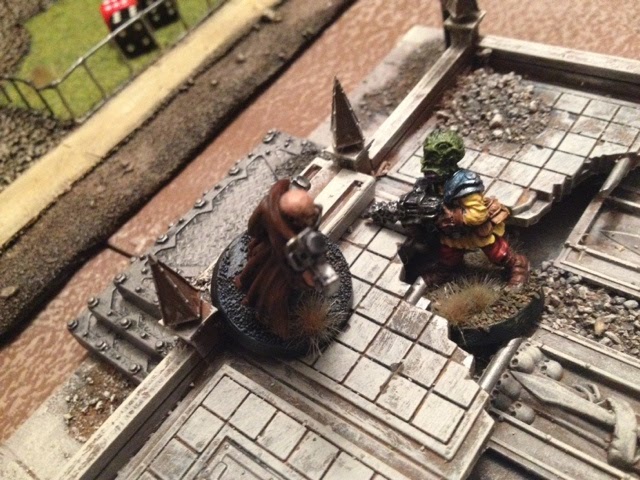 Two gun tex launched at the xenos lurking in the graveyard, blasting at him with his twin boltpistols but he took three rounds to kill the green skinned weirdo. 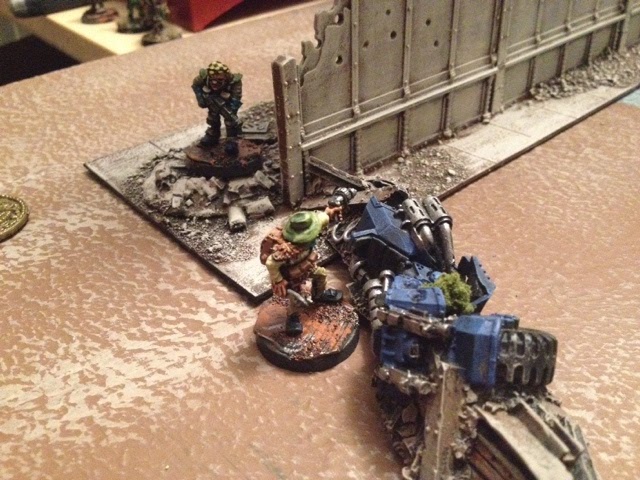 The pirates tried to defend their stash but eventually lost out to some of the orlocks moving round the board. The last of whom was killed off by a well placed autogun shot from one of Johny Alpha's team. 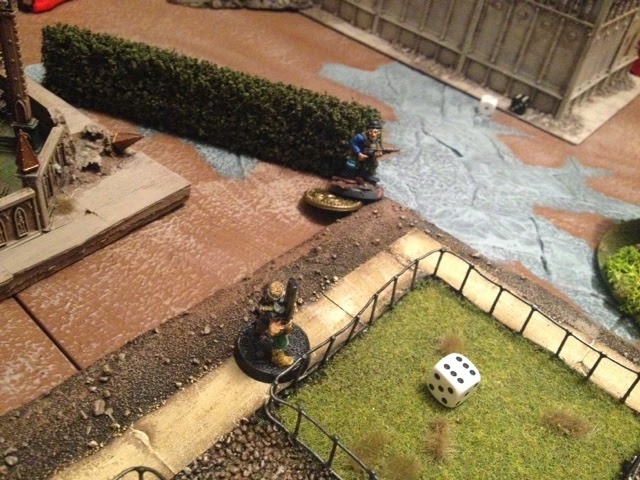 Meanwhile the last pirate was trying to avoid being shot... 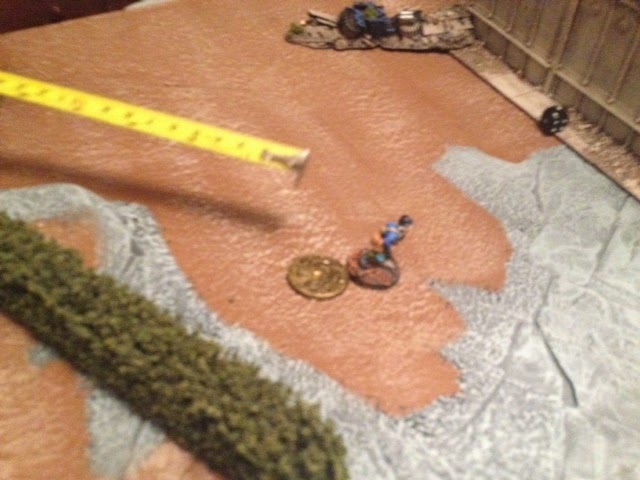 And almost made it back with the loot but died a lonely death inches from his comrades.
At this point my battery ran out, so no more photo's but in the end Johny and his one remaining team member got back to their base with two loot counters knicked from the baldie who, like the pirates, were all dead. This left two gun tex and possibly another ganger (i was fairly puggled by this point) in charge of the field.
A great little game made up on the spot, K had never played before so we kept it as simple as possible just so that we could all play on the same level. We had a brilliant laugh and the random turns meant that you never really knew what was going to happen next. I'm sold on using a similar method for all multiplayer games from now on. It is the future!
battle report