February 13, 2014
Anybody else get the Karate Kid reference? Asslessman posted an article on his Blog the other day
http://leadplague.blogspot.co.uk/2014/02/building-up-sensei-warband-whats-not-to.html
about building up a Sensei warband (as featured in the currently silly-expensive second Realm of Chaos book - Lost and the Damned) and it reminded me that I'd already put a figure together with the concept in mind. I'd also been trying to think of something to base a game around when I head up to Edinburgh in a fortnight for a weekend of blokedom. As I'm flying I wanted to try and cut down the number of figures I going to travel with and the Sensei concept struck me as perfect. So I dug out my Sensei figure and started rolling for companions. The first two were a Human hero and a Psyker. 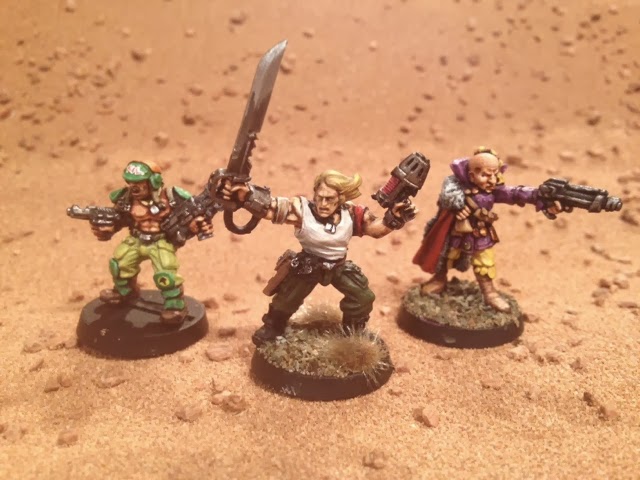 And here they are. The Human hero is just finished. He's a GW rogue trader Imperial army sculpt that I'd never seen before and had a bit of a battle on ebay trying to get one (the first one I found went for £16!) but I eventually found one for a decent price. The Psyker you'll have seen before but I reckon this is the place he fits. The next member of the band was another Sensei. I wasn't going to include him originally but as you'll see in a bit, he'll be needed to deal with the opposition. 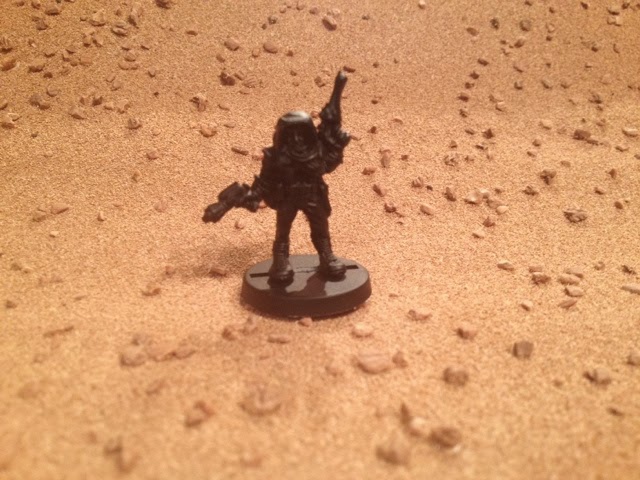 He's another Rogue trader figure and I just managed to get him undercoated today inbetween rain and hail showers. I also rolled up an Eldar and a squat. The squat will have to wait as he's in the post. And he's not a squat. Yet. But I did get an eldar ranger leader for 99p. He was covered in gunk, i reckon someone had already tried to strip him and failed so he's been in the dip all day. 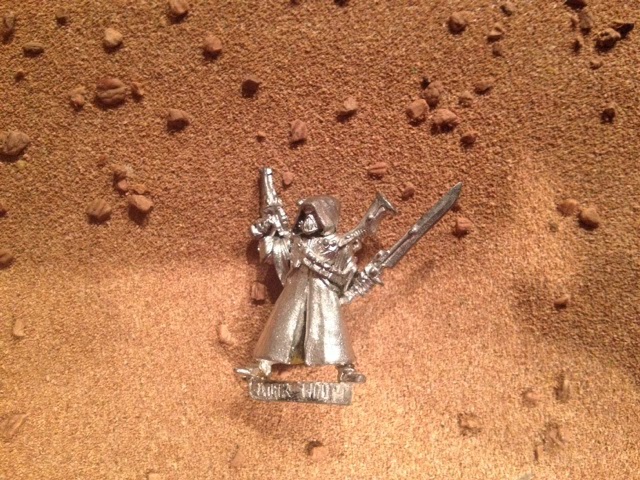 He does look a lot better now that he's a bit cleaner. Shame i'm about to chop his head off! 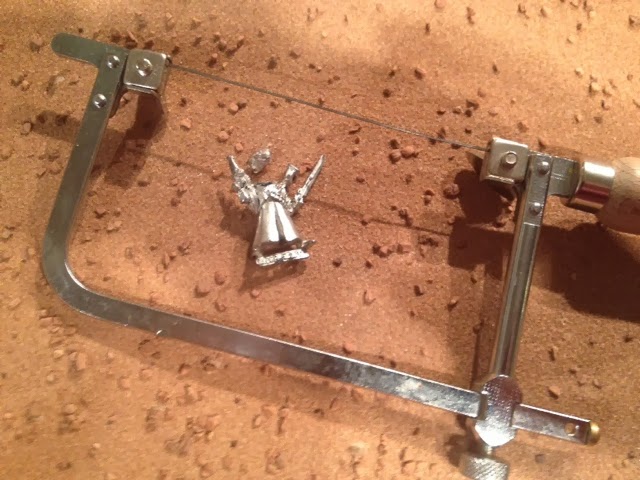 Told you! I've bought myself a jewellers saw which is a lovely little piece if kit for squeezing in a cut inbetween up raised arms such as this guy. I do have to remind myself to use it sometimes as I'm a big fan of just snipping peoples heads off! 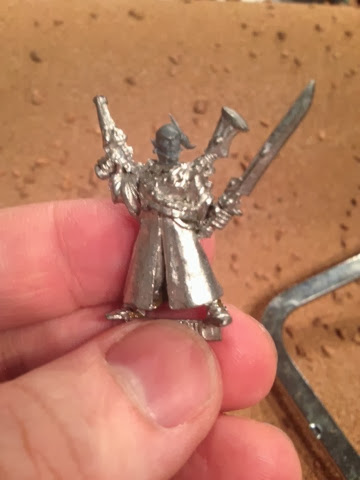 Anyway, I replaced it with a placcy head from the current Dark Eldar sprue. He looks much better like this. The original model was a bit undynamic and changing the head does make hime look more dangerous. A space-elf with a past and a temper!

Skip this bit if you already know what the Sensei are. I'll let you know when you can start reading again.
The Sensei are supposed to be the descendents of the Emperor. Obviously during his 38,000 years on earth, the Emperor occasionally got a bit frisky (hey even Spock feels the need every 7 years!) and the off spring from these dalliances are the Sensei. They are all immortal and hard as fuck. But they don't know what they are necessarily but they do fight against chaos as semi-legendary heroes and leaders but not usually from within the imperial system.

Ok you can join us again. One thing that attracted me to the Sensei is the idea that they are very similar to the perpetuals that have been cropping up in the Horus Heresy novels. It has to be said that they are some of the more interesting characters to have cropped up in the books (i wouldn't want to spend the night in a pub with a Space Marine, i'd imagine they'd be fairly dull company and it would be very hard to get them drunk). The perpetuals seem to be immortals from earth who have seen a hell of a lot, know a lot more, and seem to be pawns of other powers beyond our ken, very similar to the Sensei and their relationship with the Starchild.
I see my Sensei (Zander Van Zant) as man born in the '60's on earth (i guess the emperor was experimenting with the Kool-aid!) which means he came of age during the 80's ( I really want to give him a 80's band t-shirt, I'm leaning towards Slayer at the moment, for obvious reasons). This would make him pretty old! Still he's been around and seen a load of stuff and moved out into the galaxy when man first moved to the stars. He wandered the galaxy when earth was in it's dark age and was bemused when the Emperor first started to re-conquer the galaxy. He was at first wary of the great crusade and did his best to avoid contact with authorities but tried to learn as much as he could by moving through newly conquered worlds and listening to the imperial teachings. He quickly decided it was bullshit but realised there wasn't much he could do so rode the wave as quietly as possible. When the Heresy began he found that he had an unreasonable hatred towards the traitorous forces and the first time he ran into a squad of turncoat army troopers, thousands of years of fighting for survival turned into a white hot need to rid the universe of these traitors to humanity. He destroyed the squad single handed in mere seconds and he suddenly knew what he was supposed to do. He's been doing it ever since. Thousands of brave fighters have helped him over the years and he remembers every one but he can never look back. There are too many to kill! 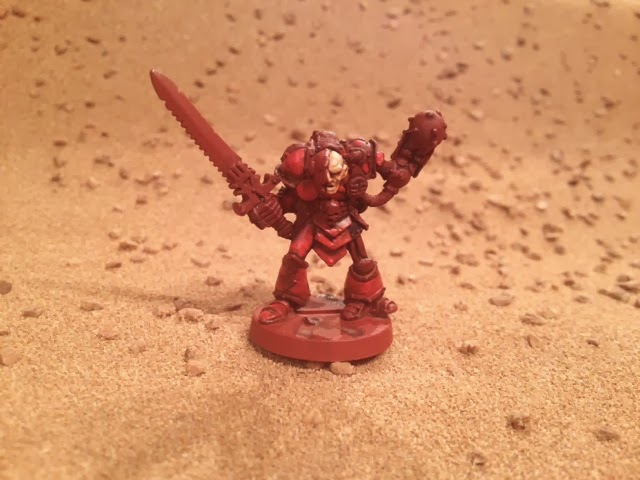 So I need a baddie! A chaos renegade to be the latest scion of chaos for Zander to hunt down and destroy. I've had him sitting around for a while but after seeing Don Has' stuff on the forum I pinched the idea of using him as a 40k renegade rather than a fantasy one. Originally I was just going to give him some Chaos marines as back-up but then I realised that I might as well roll up a proper warband form the Slaves to darkness book. 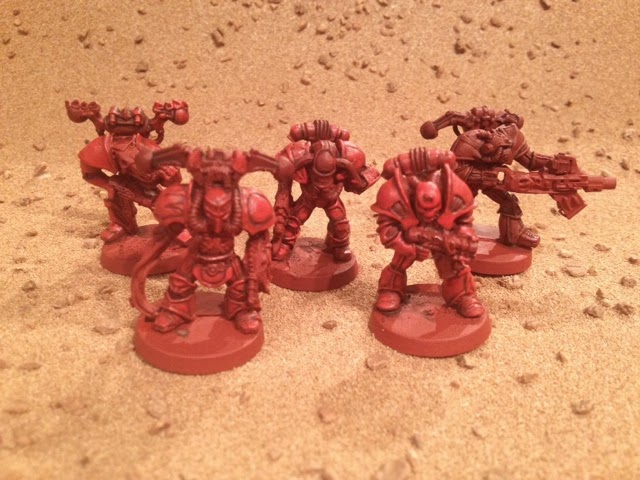 As I had a squad of these dudes already I decided to cheat a bit and assume my renegades first followers were a squad of traitor marines. Not from any specific Legion but a mean looking bunch nonetheless. I'm about half way through painting them. One more layer of red (i haven't started on the heavy bolter guy yet) and then detailing, pipes, skull heads, tentacles, guns, that kind of thing. 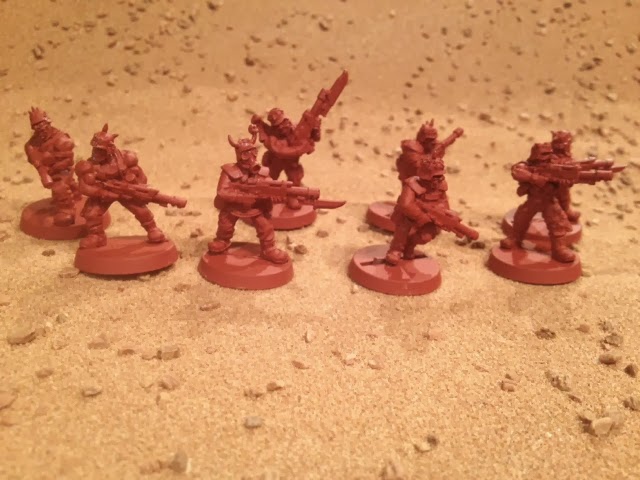 I started to roll properly on the table after that and got 8 Humans. 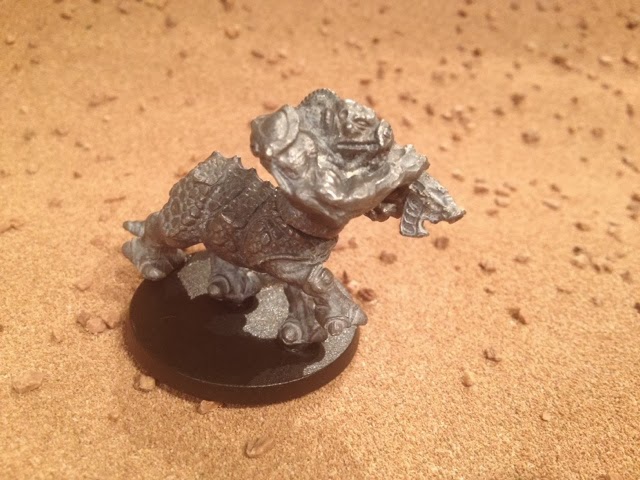 And a Zoat! I'd better get painting! 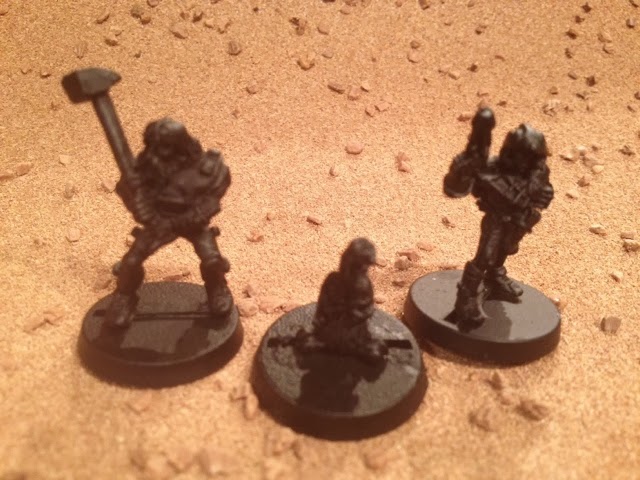 I also want to get this little group painted. Wulf, gronk and Johnny. Strontium Dogs ;D

I'll post up pics as and when I get them finished.