January 23, 2014
I quite enjoyed writing my previous post about the shenanigans of personalities in Medieval Europe, so I thought I'd write another one in order to inspire everybody's Fantasy Fluff. 'an Italianized Englishman is the devil incarnate'

Sir John Hawkwood is the classic Englishman on the make. He was an ordinary english soldier fighting in France. He may have been knighted by the Black Prince but more likely he simply assumed the rank when his service finished after the treaty of Bretigny. Thousands of French, English and other soldiers were simply left unemployed by the peace. So they did what they did best, they made war. The Free companies roamed across Europe with the sole intent of making as much money from their own little private wars as they possibly could. The largest of these companies the imaginatively titled 'Great Company' fought against the Pope down near Avignon before eventually selling their services to various states and despots in Italy.
Eventually Hawkwood rose to lead his own 'White Company' (the title of an Arthur Conan Doyle novel based on his exploits) who became one of the dominant Condottieri companies in Italy. If you are unfamiliar with the Condottiere then just think about the fact that none of the city states had a large enough native armed cavalry to out do their rivals. In order to maximise their military effectiveness the used the one asset they had plenty of, money. They bought the services of heavy cavalry companies to fight in against other cities. Obviously that meant buying the services of more mercenaries than their rivals, leading to an ever expanding market in mercenaries. This essentially led to a situation where the tail wagged the dog, the companies could threatening to go and fight for the enemy unless their pay was doubled or rewards in land were given. Other cities secretly paid the mercenaries to swap sides or to fail to fight and the whole situation descended into a complex web of pay and counter pay where the Condottieri were raking it in! Hawkwood earned so much money that he bought estates in the Romagna and in Tuscany. Eventually he became the commander in chief of the armies of Florence in the wars against Milan (Florence obviously had the most cash!). Eventually he retired in Florence, was given a pension and citizenship and died quietly in his bed. Not bad for an illiterate tanners son. The picture above is from fresco that the people of Florence paid for in the cities cathedral! 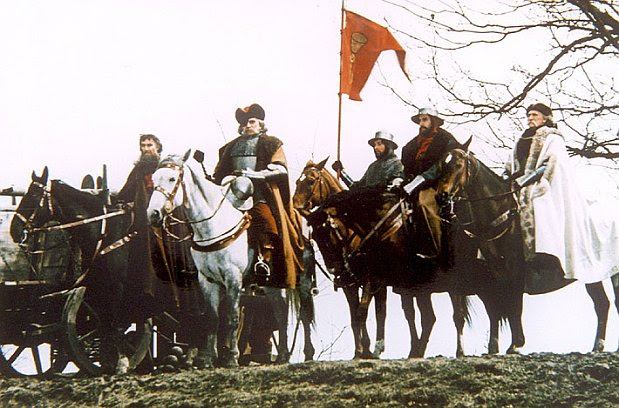 Zizka is a bit of a hero in the Czech republic and there is a massive soviet era statue to him in Prague. Way back when he was around that part of Europe was known as the Kingdom of Bohemia and in the early part of his career he fought at the battle of Grunwald/Tannenberg against the Tuetonic order. He is really comes into his own during the Hussite Wars. These were a series of wars fought by Sigismund (King of Hungary, Bohemia, Croatia and Holy Roman Emperor!) against a christian sect who followed the teachings of Jan Hus who Sigismund had tricked and had executed. What essentially followed were 3 attempted 'crusades' by a european monarch against his own subjects, accusing them of being heretics. Jan Zizka was responsible for building a rag-tag mob of peasants into an effective and formidable army that stood against the mighty nobility of the Holy Roman Empire and managed to repeatedly defeat them in open battle. Zizka used wagons as mobile fortresses, linking dozens together into bastions on the battlefield that were then manned by Hussites armed with crossbows, handguns and flails. At the start of the wars Zizka was seen on his white horse weilding is mace directing the hussites in battle. He had lost an eye earlier in his career and during the first anti-hussite crusade lost his remaining eye. However he still led the Hussite army successfully for the next three years even managing to invade neighbouring Hungary (although was ultimately unsuccessful). His tactics and doctrine are seen as the start of the end for the superiority of the Heavy Mounted knight and the first successful mass use of firearms on the battlefield.

How do you see the influence of these two being used in a Warhammer game?