In the name of the emperor! 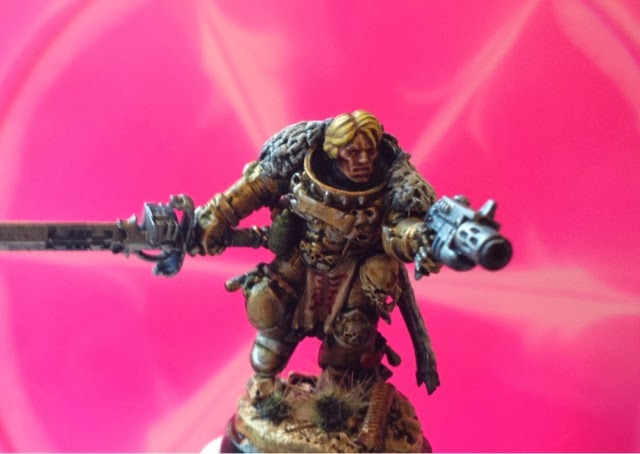 I've managed to get a lot done this week but there is plenty in the pipe line. I'm going to do a post about the figures I've collected for my half-orc and hobgoblin regiments and given enough time I'll try and get more rogue trader mini's finished. But first I thought I'd introduce to a figure I finished yesterday while trying to occupy myself while wife was in A&E with the youngest and I was minding the girls (turns out it was gastroenteritis but he's fine).
This is a figure I originally built to play inquisitor with but shelved him after I realised that power armoured inquisitors were some what frowned upon. I see him as a bit of a naive brute. The 'nephew' of some high ranking eclesiarch who was taken on as an interrogator in return for a favour. He was never meant to make inquisitorial rank but the unfortunate death of his master and some string pulling has left him as a pain in the ordo's arse. He is seen by many more subtle inquisitors as unsubtle blowhard whose idea of undercover work is to chop the heads off mutants before they can talk.
All I need is a name!
Cheers.