December 21, 2013
Hobgoblins are one of those races in Warhammer universe that seem have never gotten their fair share of love. Gw seem to have underdeveloped lots of parts of the fantasy world they created, in favour of redoing the same limited races over and over again. Estalia, Tilea, Albion, Norsca, Kislev, Araby, Nippon to name but a few of the Human realms that have not received that same kind of love as The Empire or Bretonnia. Some of the races that appeared in third have slowly been ignored and some have even gone the way of the squat. Slann, Pygmies, Gnomes, Chaos Dwarves, Fimir, Zoats, Half Orcs etc have been sacrificed in order to limit the number of races and concentrate on armies and figures that sell. Fair enough. Gw is a company after all and is meant to make money but it removes a part of the soul of the game and is perhaps part of the reason why us oldhammerers spend so much time hunting for obscure mini's and building random regiments of figures that a modern day gamer (the sort of kids who attend the club I run) may not even recognise as a Warhammer race. The loss of these races and the variety that they brought to the battlefield may have been one of the factors that brought the Oldhammer phenomena into being in the first place. For me it was the other way round. I was trying to interest my gaming mates in small scale oldschool skirmish wargaming but as they were all a bit younger than me (my old school mates being in Scotland and Nottingham) and I wasn't having much success. One of my old mates was down and I'd found a PDF of Slaves to darkness and we decided to roll up warbands for shits and giggles. My warband got some hobgoblins. Shortly afterwards I discovered Orlyggs blog and decided to start collecting the mini's for the warband. Things have since gotten out of hand! I've collected enough mini's for a decent sized chaos army and this has led to/morphed into a chaos led greenskin army. So I've managed to cobble enough hobgoblins together for a couple of regiments (as well as the Black Orcs from last month and the Orcs from a couple of months ago and the soon to be discussed half Orcs).
So, enough blethering. Look at my toys!
The first unit was actually designed to be a regiment. The mighty Throg and his Hobgoblin Despoilers of the Darklands. I've managed to collect three of the command models and a good number of troopers but I still need the Champion (which you can see in the illo below) as well as about 4 more troopers. I was orignally just going to have them as members of a mixed Hobgoblin regimet but I decided they deserved a regiment all of their own. 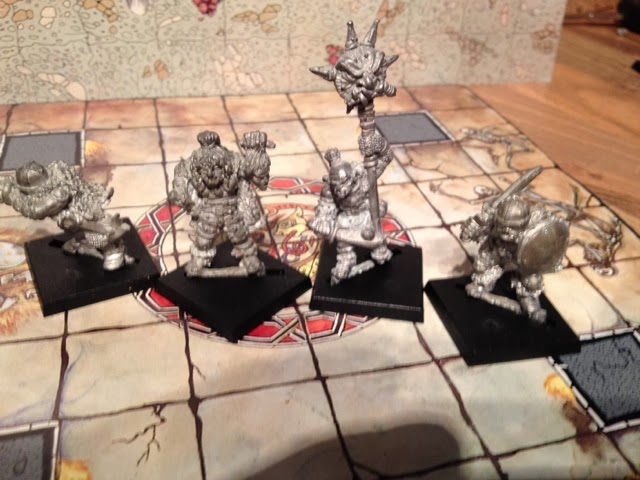 This next model is from the AD&D range that Citadel produced. There are only three poses but each pose has about 9 or 10 varients. I believe they were sculpted by Aly Morrison who did a lot of citadel's Hobgoblins. I've only got the one just now but if they come along cheap enough I may build a third regiment! 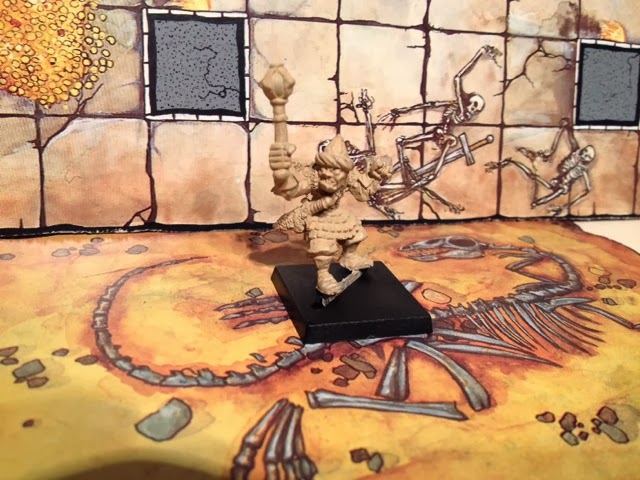 The next two guys are also from a regiment of renown, in this case Mighty Ugezod's Death Commandos, sculpted by Nick Lund and released under his chronicle label. The rest of the regiment, which I believe came as a boxed set, were orcs and goblins but here we have a Hobgoblin Berzerker and Sileth Frothlip. 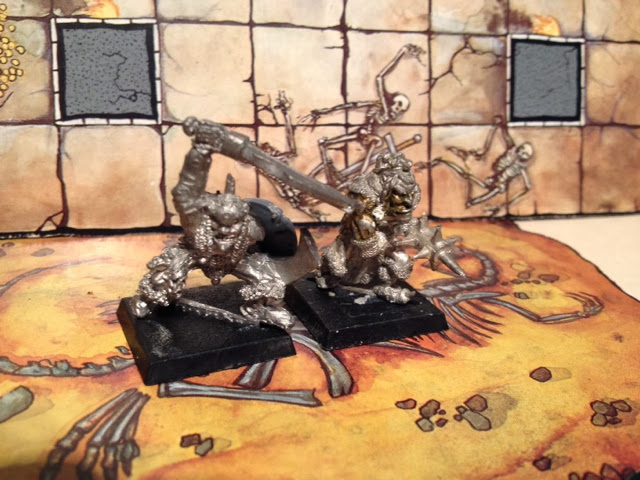 The next three aren't hobgoblins at all. They are Uruk-Hai from the original citadel Lord of the Rings range. I've always liked the middle figure as I remember someone owning it in my youth. I've no idea who sculpted these but I'm sure someone can tell me. I'm going to use them as Hobgoblins cos it's my army and I want to. 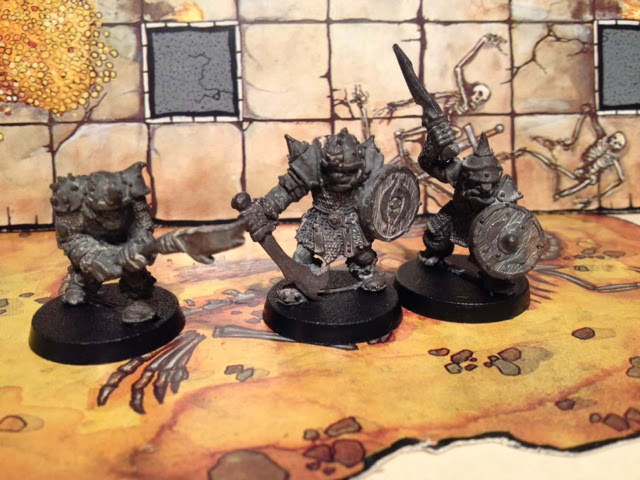 These two figures are stand alone figures but for different reasons. The one on the left is from the Talisman boardgame and is a lovely little figure  that originally came in a blister with a Satyr and a Toad! The second figure comes from the BC2 monsters starter set and so was the only hobgoblin in there. I do have the Goblin and Lesser Goblin from the set as well and may sneak them into a unit somewhere. 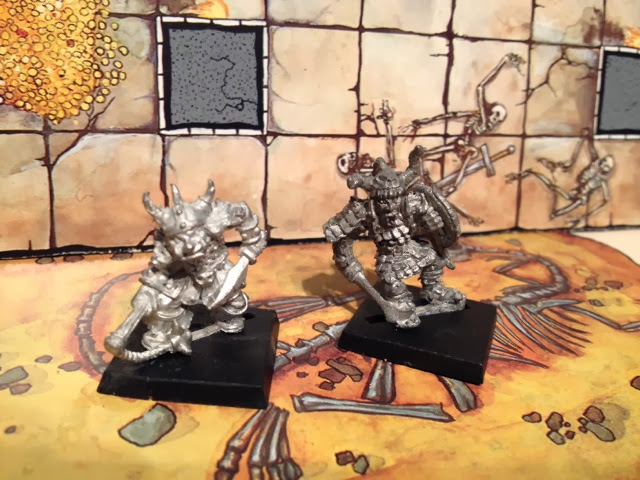 This next load are all from the same source but are divided by the change over from solid base to slottas. These figures are mostly from C36 Hobgoblin range sculpted again by Aly Morrison although a couple are from the DL2 'deluxe' box set by the same sculptor. These figures were originally released with the solid base but were later redesigned to have the tab base. I've still got loads of these to find (in fact i've got another one that i'm trying to release from a bizarrely tough base) and if I continue to collect then it's a third regiment for me! 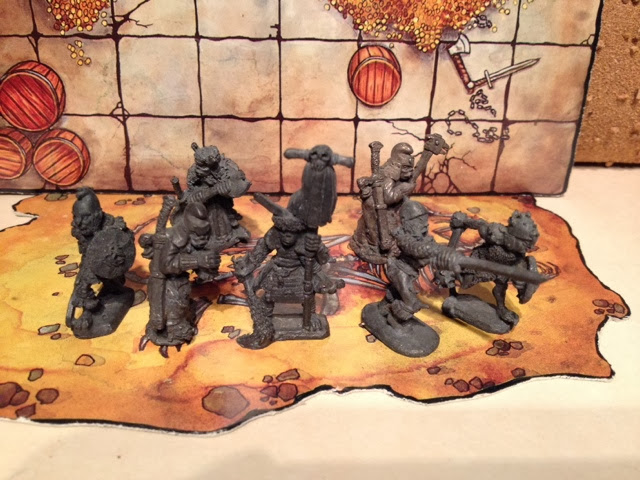 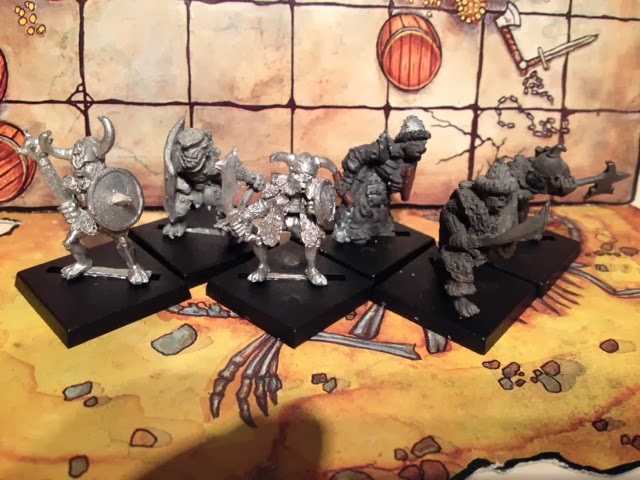 While I'm here I might as well show off an eBay win that i was quite proud of. A unit of Hobgoblin wolf riders that generally go for daft money but I actually got them for a reasonable price. 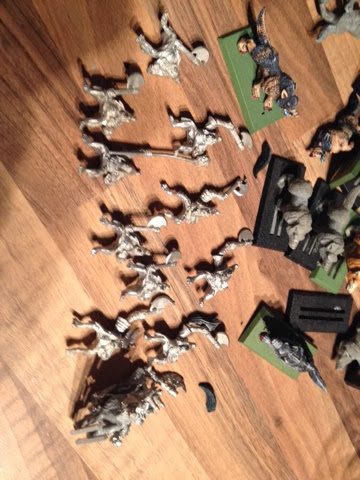 These come from the most recent incarnation of hobgoblins from the early nineties. Gw brought hobgoblins back as a slave race for the big hatted Chaos dwarves. Their physiogomy had changed as had their background and for some reason these go for loads more money than the older figures but for me, they have lost some of their uniqueness.

So what is it about Hobgoblins? To me, it's about the idea of an autonomous greenskin nation existing in the darklands. These frenzied steppe dwellers occasionally raiding into the human worlds and these bizarre lanky greenskins seem to be more viciously intelligent than their cousins. It's this maniacal intelligence that attracts me to hobgoblins. The idea that there is a plan. And that plan involves causing humies some grief!
Oldhammer