Stormbringer in the Mags 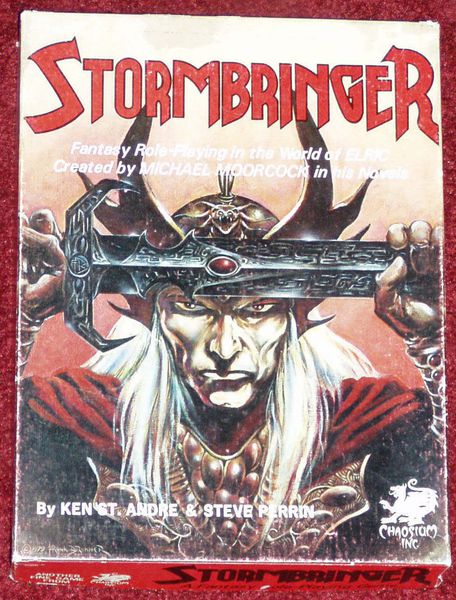 Stormbringer was Chaosiums RPG set in the world of Elric and the Young Kingdoms. Originally released in 1981, it was basically Runequest set in the World created bu Michael Moorcock and was pretty much written by Ken St.Andre, the same bloke that is responsible for Tunnels and Trolls. The game was pretty popular but may have been edged out of peoples view by the much more successful Call of Cthulhu released the same year. The game didn't get any supplements that I'm aware of in it's first edition but did get several in the 2nd (1985) which was essentially the same game but cleaned up a bit. At least 6 were released, the first of which was then included in the GW published 3rd edition in 1987 which is the version that I own. Now, you'd think that having a shiny new RPG in a lovely hardback with miniatures to support it, GW would have spent more time trying to flog this game to the public but White Dwarf only ever featured the game once with a 3 part adventure called 'The Madcap Laughs' in issues 95-97. Considering the game had been around 6 years and the White Dwarf regularly featured material for Runequest and Call of Cthulhu, this was a rather poor show from the folks at WD. I was so incensed when I realised this recently that I wondered if anybody else had bothered writing material for the game. I dug around the internet for digital copies of other ancient RPG magazines and, lo-and-behold, I found some stuff. So in order these scenarios from lingering a sad and mouldy death, I present them to you so that they may take on another life in the 21st century.

This first Scenario is from a Magazine called 'Adventurer' which was bannered as 'The superior fantasy and science fiction games magazine'. Adventurer ran from 1986 to 87 and was published by Mersey Leisure Publishing and only ran for 11 issues. This scenario comes from issue 3 and was written by Alan Morgan.

The scenario itself revolves around a trio of Dharzi who are the remnants of race destroyed by the Melniboneans, who have tried to keep themselves alive for years through nefarious means. The writer admits himself that it's a bit of a railroad of a plot but there are plenty of goings on to keep players happy whether they like to sneak around and investigate stuff or simply chop up undead beasties. Although there seems to be a lot of writing here there is a large amount of the game that will require the gamesmaster to script by himself and some of the motivations of the characters are sketchy at best. It also requires that a female NPC be crow barred into the PC's group for the sole reason that she'll need to be possessed and rescued later on. It's worth a go but be prepared or at least prepared to improvise. 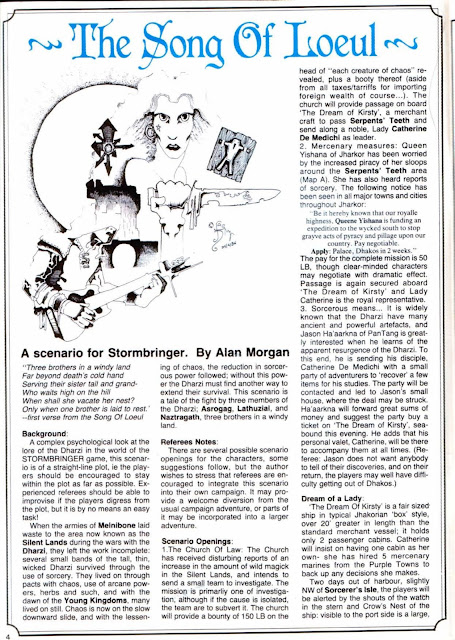 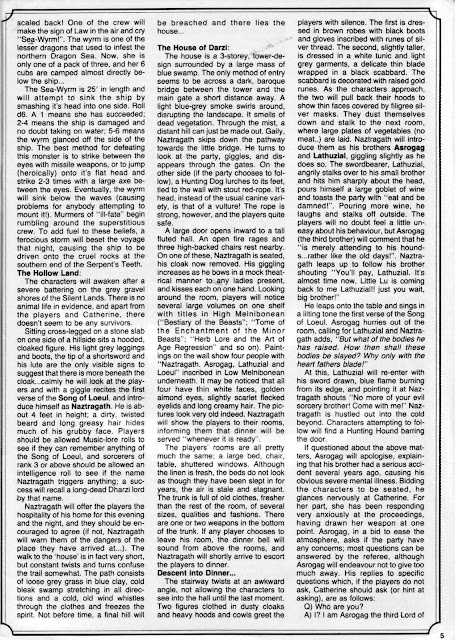 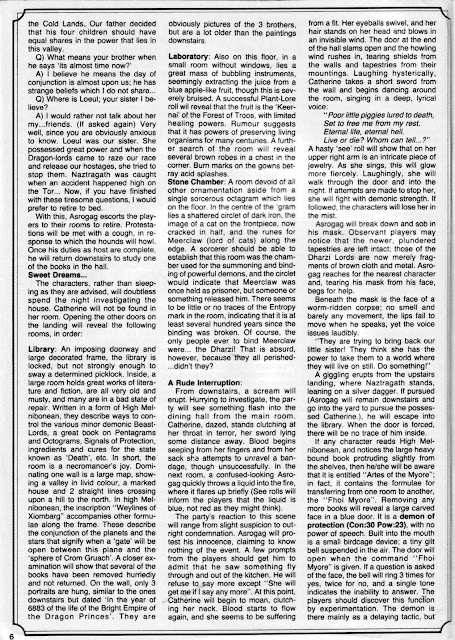 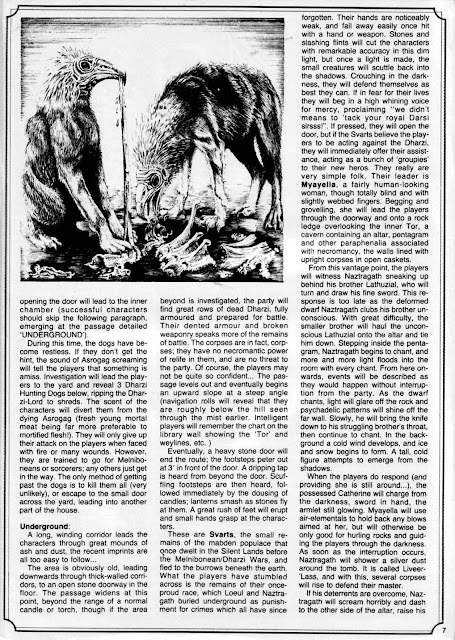 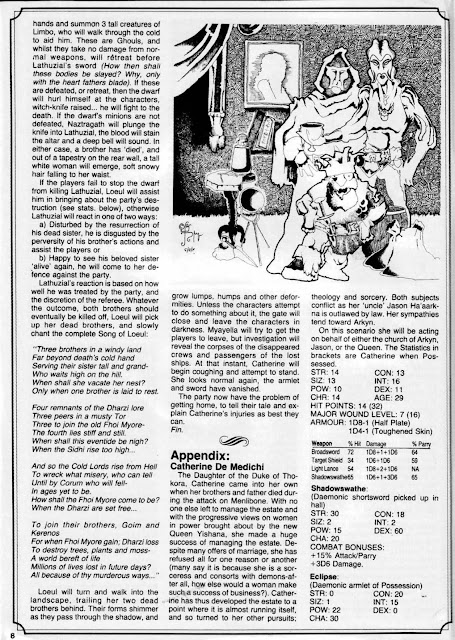 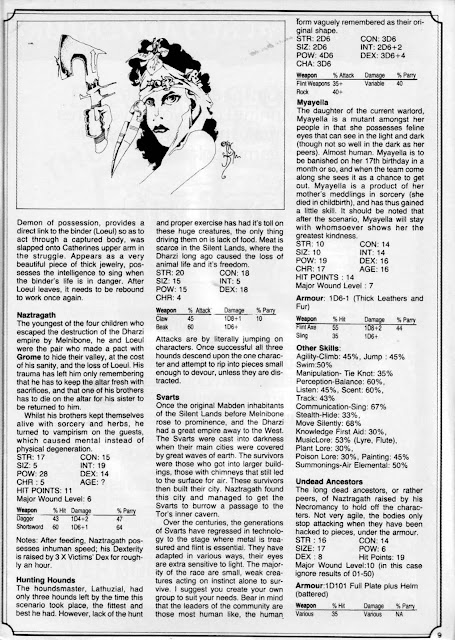 The second adventure comes from Different Worlds magazine which was published by Chaosium between 1979 and 1987. This particular scenario comes from November 1983 and was written by Ken St.Andre himself. Bastions of Balo is more or less a straightforward dungeon bash with the conceit that the characters have been abducted by the insane Jester of the Chaos Gods, Balo, to take part in his mini world that is intended to kill Elric. So bear in mind that's the whole point, to try to kill off Elric. Which means there are a whole load of nasty, daft and down right infuriating ways of killing off your PC's. It's also a mini-world so some of the areas give a lot more scope than the traditional cave or dungeon room. There are jungles, lakes and circuses to deal with. If you approach it in the right way this could be bloody hilarious or possible your players might end up hating you..... 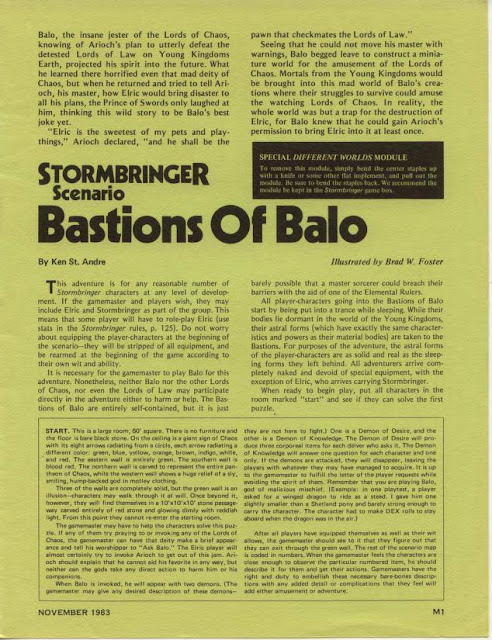 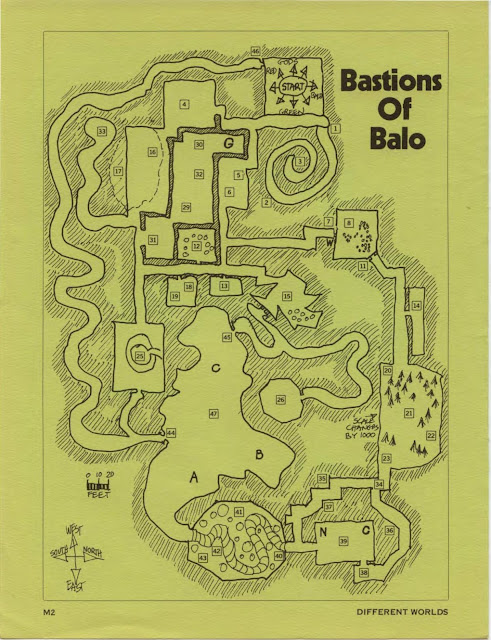 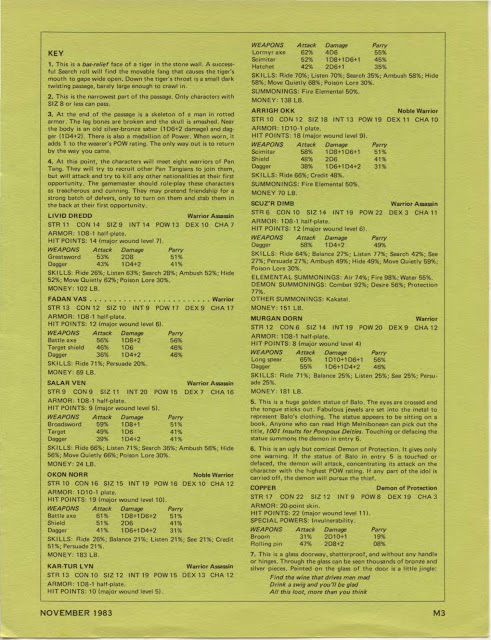 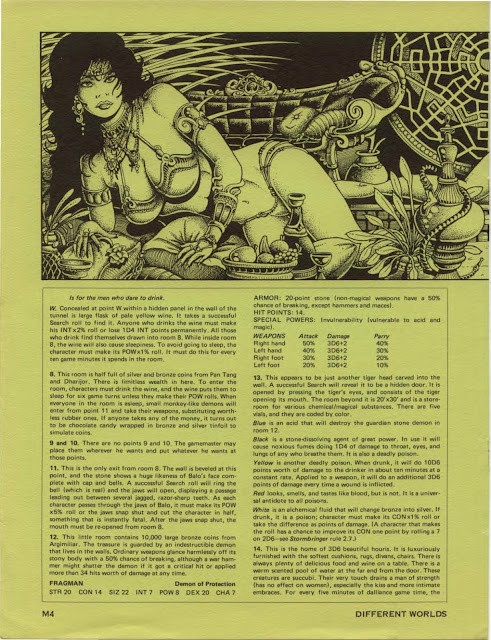 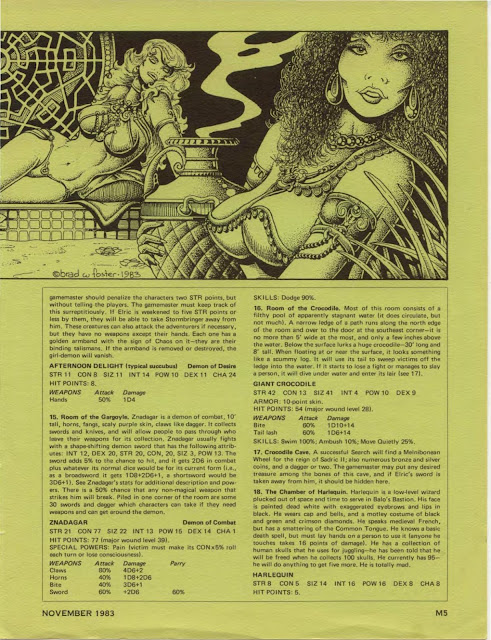 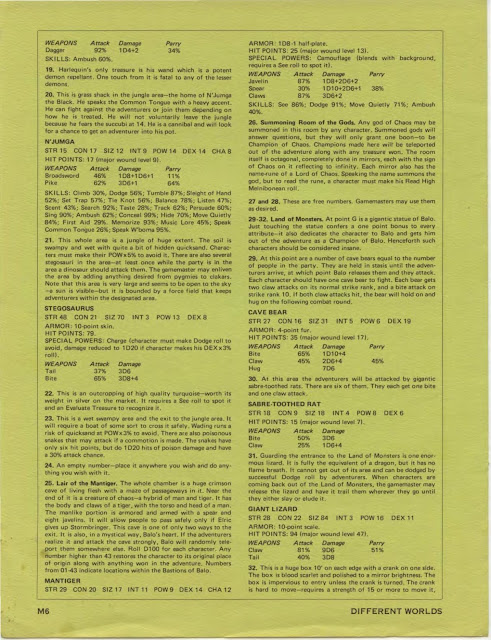 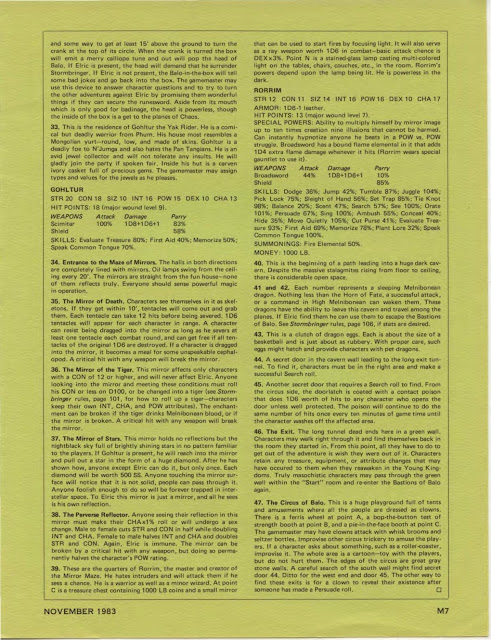 This last scenario was published in Imagine Magazine which was TSR's UK gaming magazine and ran between April 83 and October 85. This particular adventure comes from issue 22 in January 85 and was in fact a Moorcock special and is well worth hunting down if you are that way inclined. Now, being TSR's house magazine it is unsurprising that this particular adventure is actually published as an AD&D adventure so strictly speaking doesn't fit into our Stormbringer brief however, I feel it's worth including for several reasons. Firstly this is an adventure supposedly written by the man himself, Michael Moorcock (although I have my suspicions that Michael Brunton did the lions share of the work). Secondly, this adventure gives you the opportunity to play as another of Moorcock's heroes, Earl Aubec, but the focus is on an artifact that is central to the Elric storyline and his name comes up in the story more than once. Thirdly, the scenario is illustrated by none other than Jes Goodwin which in itself is a reason to dig it out of the dim and distant past. This is actually a solo adventure (ie GM and one player) although there is the possibility of a second player joining in you so wish. Although the basic outline of the plot seems straight forward there is actually quite a bit of meat here so it represents a fairly entertaining one shot. It isn't beyond the skills of most people to produce stats for Stormbringer characters  to replace the AD&D stats an it would probably be worth it if you were regular Stormbringer players. 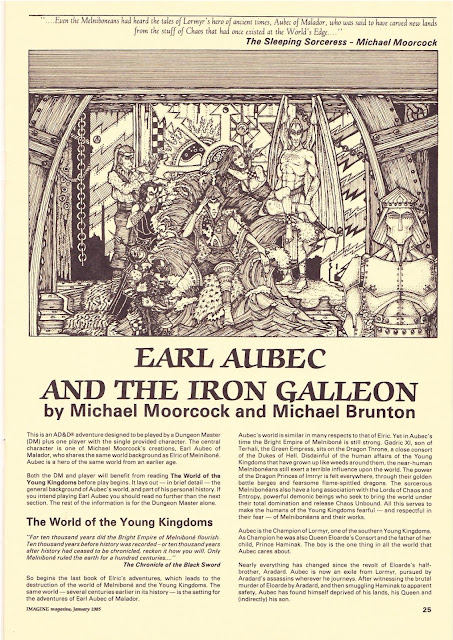 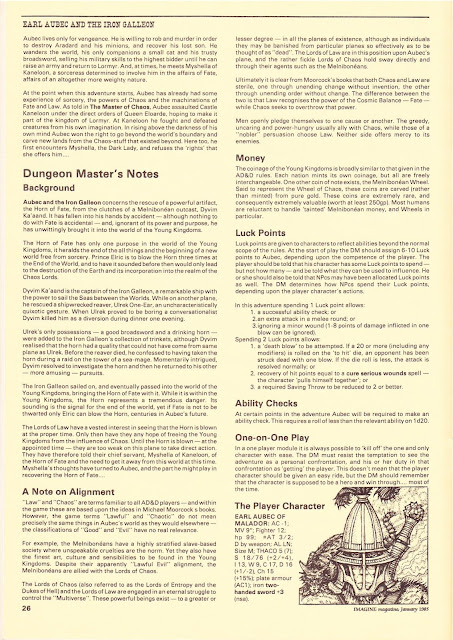 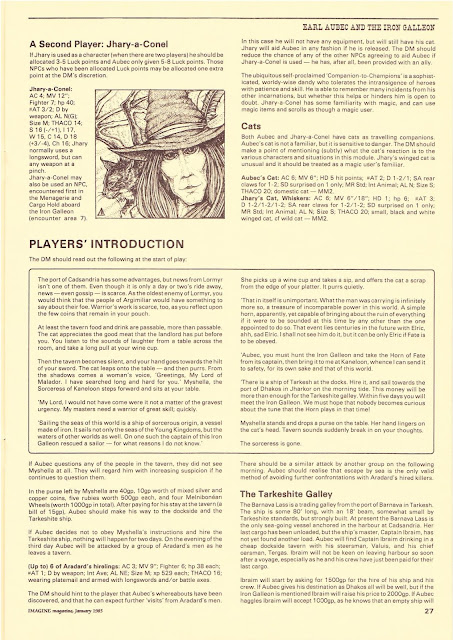 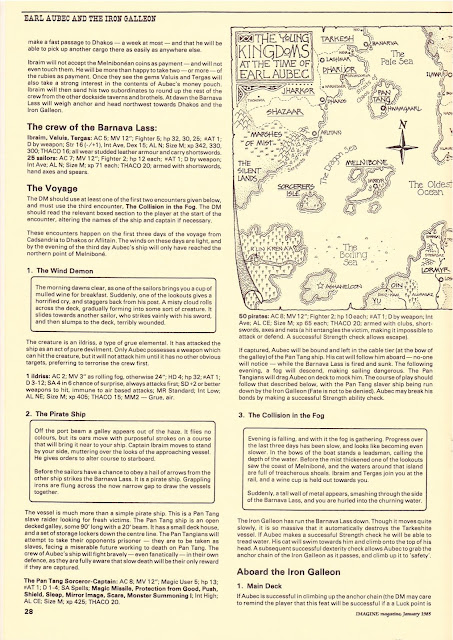 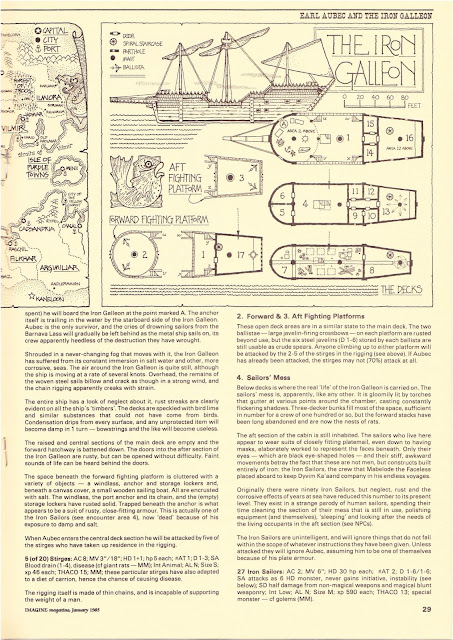 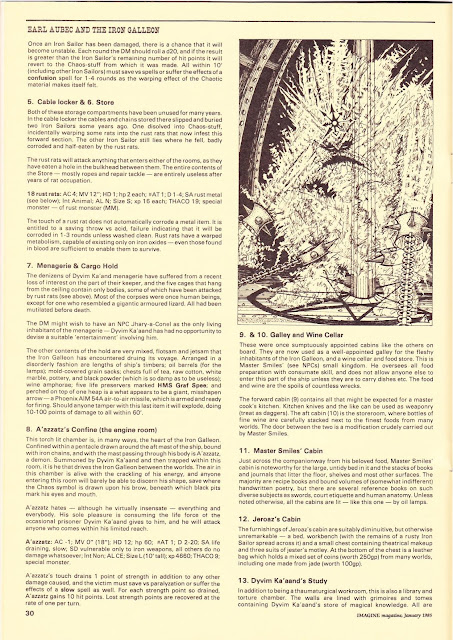 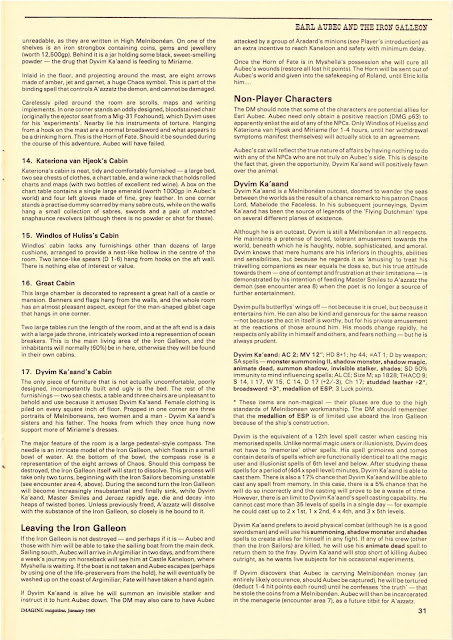 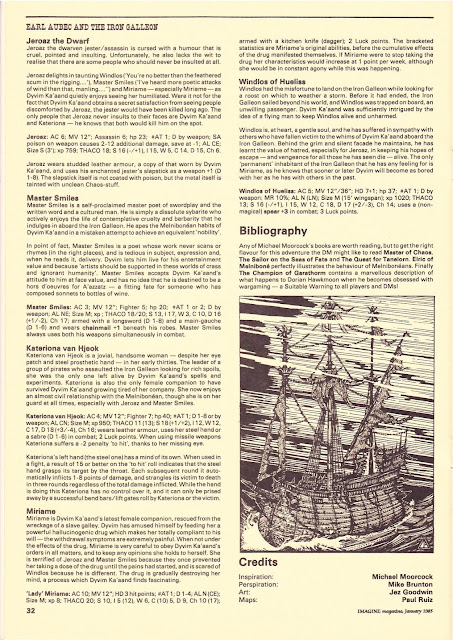 So there you are, three adventures from back in the mists of time, it would be nice to hear them getting played again. Get yer dice out and get at it!
RPG's Stormbringer