October 06, 2018
Imagine I was a complete noob. Someone who had never played a fantasy game or watched a fantasy film of any sort. Someone who was perhaps new to the world of Fantasy and had been lured into it via friends.

We've all been there. We were young and nooby once. Our first Fighting Fantasy book probably changed all that. Or perhaps it was reading Tolkien or maybe some older sibling had really cool looking posters in his room. Whatever the mechanism, we fell into the Fantasy world with very little prior knowledge. When we were pups we had wonderful illustrations to demonstrate to us what the creatures that filled these Fantasy worlds as well as our imagination. This has cemented the image of creatures and races into our minds. The formative experience of our youth will always be our strongest image of what these things should be.

Imagine that someone had just told you about Orc's. You'd never heard the word before and it meant nothing to you. This can happen. It happened to me yesterday. I decided that MDF, lasercut scenery was an ideal project for my year 10's. 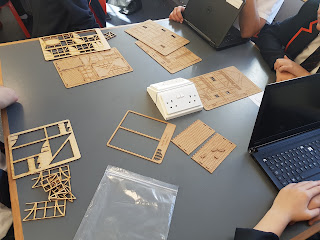 They have to design something from scratch to be flat packed, they have to use CAD/CAM, they have to research from a point of complete ignorance. Yep they know nothing about Fantasy or Sci-fi. So when I was talking to them about ideas for designs I asked them 'What kind of house would an Orc live in?' Expecting this to start a conversation I was a bit taken aback when nobody knew what an Orc was. I know! It's Shocking! So google was used and an image search was carried out which left me in even more shock than the teenagers ignorance. 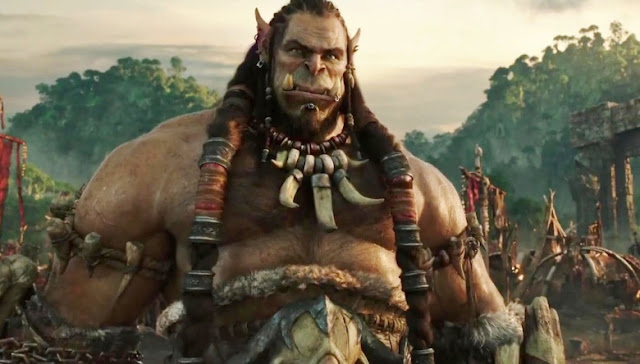 Orcs have changed. Orcs seem to have become huge, bemuscled, fur-clad, barbarians. The modern Orc appears to have a wonderfully coiffured beard and mane of hair with a noble but grim physiognomy. He dresses in furs with a wide belt complete with decorative buckle. His shoulders are covered by Space Marine sized pauldrons and he carries an axe that would take the combined production of a small mine and smelting works a week to provide enough metal for it's casting. 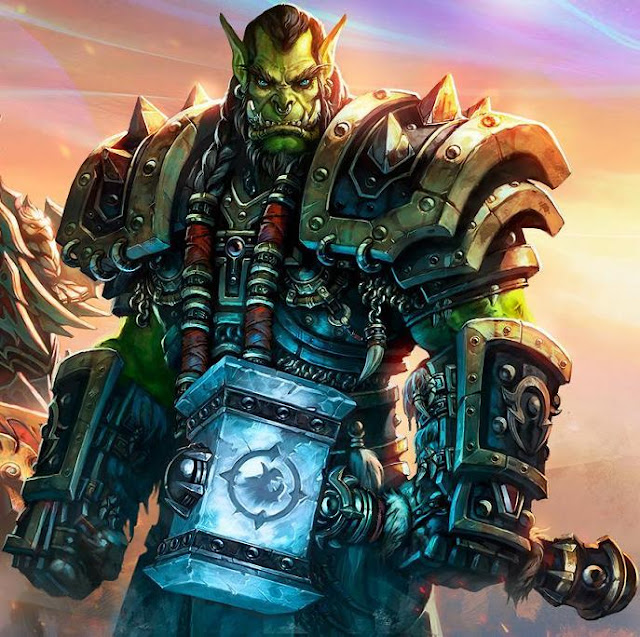 Modern Orc appears to spend all his spare time down the gym. When he isn't fighting improbable picthed battles or skirmishing in dungeons, he's pumping weights with his homies and making sure he doesn't miss leg day. The extreme muscularity of these big green posers suggests that they are spending most of their days guzzling protein drinks and spotting spotting each other on the bench. In fact Orc's must be living an incredibly healthy life style. Maybe they also run coffee shops and micro breweries and sell their special beard oils at farmers markets. Modern Orcs are in fact Hipsters. Big. Green. Gluten-free. Hipsters. 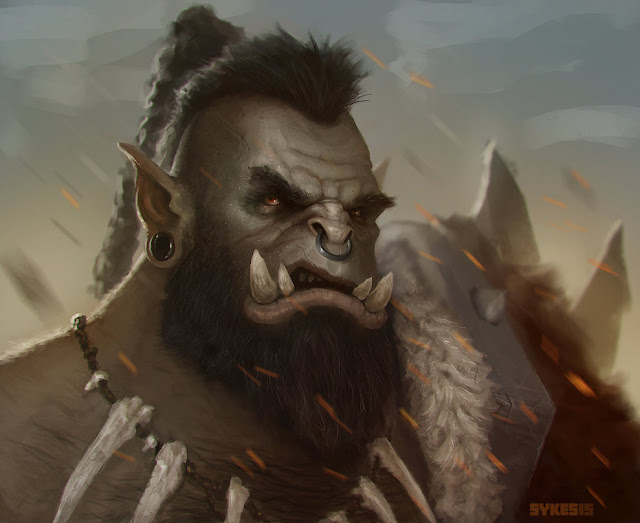 There also seems to be an enormous amount of money to be made out of Orcs if you happen to be Chiropractor. Organo-Orc appears to have perfect posture. He stands straight and gazes out from above his shoulders. He strides about the fantasy landscape with little fear that swinging his gigantic weapon around is going to cause any muscle spasm or any discs to slip. His perfect posture suggests that when he isn't down the gym, he's at yoga class practising his downward dog. 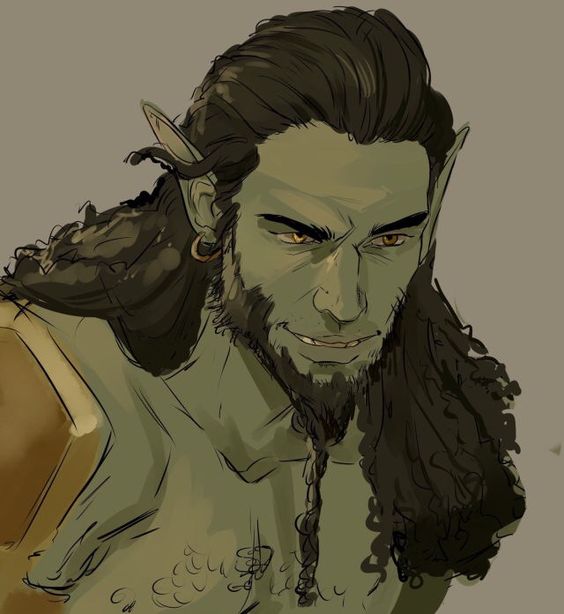 In fact Modern Orc is so full of Noble Savagery that ladies of the human persuasion can't keep their hands off them. How do I know this? You only have to look at the number of Half-orcs roaming around. Look at them! The genes they've had passed down to them from their cat walk model /adventurer mother mixed with their muscle bound fathers have left them with the looks and physique of a greek god who's been painted green and happens to have a problematic lower incisor issue. 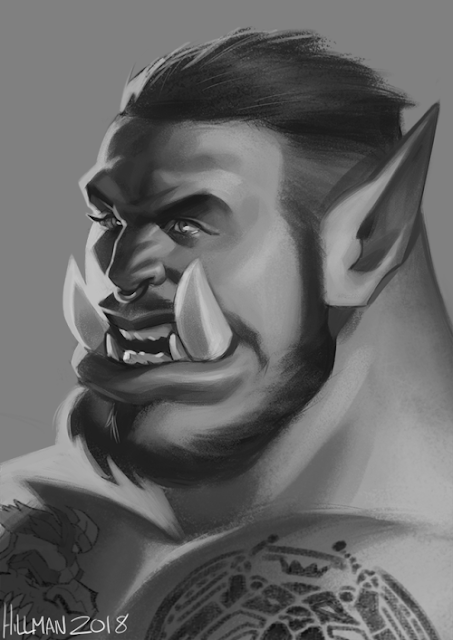 All this muscly perfection paints Orcs as some noble barbarian race, fighting for the honour of their tribe and for enough loot to pay for their Gym membership. I wouldn't be surprised if there war making wasn't in fact a way of raising money to ensure that the lesser spotted tree-frog had enough flys to eat durinf particularly dry summers or to raise awareness of the true plight of the terriblt misunderstood Wyvern. Metro-orc seems to exemplify the exact same traits as we expect from a Human barbarian. A paragon of unleashed rage with perfect muscle tone, a great big weapon, small furry clothes and enough height to stare at an Elf's bald spot. Mr Hipster-Orc is simply showing all the ideal traits a Human should have (height, fitness, strength, agression, warrior nobility) but painted green with big teeth. It's all so wrong.

Orcs should be snivelling, cowardly creatures who fight in large numbers. Orcs love fighting, we all know that but they don't do it on their own. They like to fight in big mobs of their mates (this is in it's self something that needs to be discussed. If you are fighting in a big mob you won't be using big mahoosive axes that need huge amounts of room to swing. You'd be using spears or halberds, something that allows you to take advantage of your numbers. Fighting in a large group gives you a better sense of security and allows your fellows to strike at opponents that threaten you in order to keep the mob together. But I digress.)
And while they may plunder, raid and harass for their own ends, until Gw decided that all their armies had be firmly split down racial lines, Orcs generally didn't go conquering for their own gain. They are the ubiquitous evil henchmen. It takes a powerful evil sorcerer, a vengeful Warlock or a desperate Chaos Lord to knock Orcs into and army that will invade another land. They are the fantasy version of the Minions from Despicable Me. Without a evil mastermind to guide them, Orcs will just drink, fight and eat for their own entertainment, they are dangerous and violent but they stick to their outposts, watch towers and dungeons. They are far too disorganised and self-serving to organise themselves into an army of invasion.


Orcs should be armed and armoured with whatever they can thieve from corpses. There are no bespoke armourers working in the Orc equivalent of Shoreditch. To make metal armour and weapons would require first of all, industrial scale mining. The ore that would eventually become iron that you would need to make steel would need to be dug up in huge quantities and transported to a place where it can be processed. There also needs to be some separate mining endeavour to dig up loads of coal for the smelting process. The chances of Iron Ore and Coal being anywhere near each other are fairly slim so transporting one or the other is going to be a big job. There is no way Orcs are going to do that, they are far to lazy. If it doesn't involve food, drink or fighting then Orcs simply won't do it and no amount of bullying will make them cos if you try to bully and orc he just see's it as an invitation to fight. Ok, I suppose the Orcs could capture slaves and make them dig up the ore but then you need to process it. Smelting Iron isn't an easy thing to do, even if you know what you're doing. The Orcs' at Isenguard had Saruman to show them what to do remember. And yet again you've got the laziness factor. No self respecting Orc is going to want to work in some hot and dangerous hell hole while his mates are off doing fun things. Then you've got to process the Iron into Steel, shape, anneal temper, sharpen etc. Nope, Orcs couldn't care less for all that crap. Orcs do not make their own weapons unless they are sharp sticks and wooden clubs. Orcs nick stuff. From everyone and everywhere. Their arms and armour would be a mish-mash of dented, holed, rusting, ill-fitting and badly maintained examples from all over the known world, crudely adjusted and adapted and held to together with random straps and bindings.

Orcs should be the worst reflection of man. His ugliness and cruelty to other men. His laziness and corruptibility. Orcs are everything that man truly fears himself to be. Orcs are not noble creatures defending their tribe and their people. They are selfish and only interested what they can gain for themselves. They don't have a noble bone in their body or thought in their head. It makes little sense to have creatures that are supposed to be an enemy of mankind displaying exactly the same qualities that you respect in a Human warrior. Orcs should be a creature that disgusts man, that he loathes. Man fears Orcs, not because of their strength or their pointy teeth, but because they represent the beast inside man. The Orc's character is made up of all the faults that man pretends he does not have. To get really deep about it, if you'll allow me, all the aspects of man that were seen to be base and barbaric (to use that term again) within human society (and not just Fantasy human society), those aspects that a good man would never display but a uncivilised one would. The laziness, the drunkeness, the cowardliness, the cruelty, the selfishness, the viciousness, the corruptibility, are all the aspects that make and Orc who he is. And while these are not welcome within the society of man, to an Orc, they are the marks of what makes them truly an Orc.

So, lets make a promise to ourselves.

Let them know that they are being hoodwinked by a very clever PR campaign. Someone out there wants us to think of Orcs as our friends. They want us to see them as the Noble Savage who has come to aid us in our quest to rid our lands of evil.

But it is not so. For the Orcs are just the play things of the true evil. And the true evil probably owns a PR company.

Tell everyone. All over the world. Never forget.